Fragments of a comet likely hit Earth 12,800 years ago, and a little Paleolithic village in Syria might have suffered the impact. 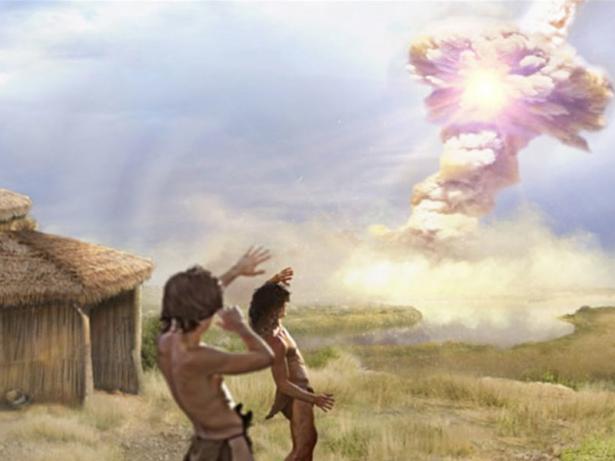 The Paleolithic settlement of Abu Hureyra, in what is now Syria, may have been destroyed by the airburst of an impacting comet about 12,800 years ago. ,Jennifer Rice, CometResearchGroup.org

Abu Hureyra is an important archaeological site in Syria, known for artifacts documenting early adoption of agriculture in the region. It may also be recognized as the only known human settlement to have been hit by a fragment of a comet.

The site, now under the waters of Lake Assad, was quickly excavated between 1972 and 1973 before construction of the Tabqa Dam flooded the area. During the excavation, archaeologists realized that there were really two sites, one on top of the other. The first was a Paleolithic settlement of hunter-gatherers, and the second was a farming town, with new buildings of a different style.

The Paleolithic village at Abu Hureyra was indirectly hit and destroyed by fragments of a comet that slammed into Earth about 12,800 years ago.

A new analysis of samples of soil and artifacts salvaged from the original excavation has revealed a surprising finding: The Paleolithic village at Abu Hureyra was indirectly hit and destroyed by fragments of a comet that slammed into Earth about 12,800 years ago.

The researchers think that upon entering Earth’s atmosphere, the already-fractured comet likely broke up into several more pieces, many of which didn’t reach the ground. Instead, they produced a string of explosions in the atmosphere known as airbursts. Each airburst was as powerful as a nuclear blast, instantaneously vaporizing the soil and vegetation underneath and producing powerful shock waves that destroyed everything for tens of kilometers around. The village at Abu Hureyra was hit by one of these shock waves.

“When we dug the site way back in 1973, I had noticed that there was heavy burning in one area, but of course, back then I wasn’t thinking about comets or asteroids or anything of that kind,” said Andrew Moore, an archaeologist and professor at New York’s Rochester Institute of Technology who led the excavation at Abu Hureyra. Moore is the first author of the new study, which appeared online on 6 March in Scientific Reports. “It now turns out that heavy burning was the result of the entire village going up in smoke as a result of this airburst incinerating the whole place.”

A multidisciplinary group of scientists has now found that some soil samples from Abu Hureyra were filled with tiny pieces of melt glass—small bits of vaporized soil that solidified quickly after the explosion. They found melt glass among the seeds and cereal grains recovered from the site, as well as splattered in the adobe that covered the buildings. Most of these bits of melt glass are between 1 and 2 millimeters in diameter. The team also found high concentrations of microscopic nanodiamonds, tiny carbon spherules, and charcoal—all of them likely formed during a cosmic impact.

“We found the glass splashed on little pieces of bone that were by the hearth, so we know that the molten glass had landed in this village while people were living there,” said coauthor Allen West, a member of the Comet Research Group, a nonprofit organization aimed at studying this particular cosmic impact and its consequences.

The impact origin of the melt glass is supported by the minerals it contains. Melt glass found at Abu Hureyra contains molten grains of minerals such as quartz, chromferide, and magnetite, which can melt only at temperatures ranging from 1,720°C to 2,200°C.

“This melt glass required enormous heat far beyond anything that a group of hunters and gatherers could ever generate on their own.”

“You have to use very sophisticated scientific analytical techniques to see these things, but once you see them, then there’s absolutely no doubt about what it is you’re confronting, and there’s only one explanation for it,” Moore said. “This melt glass required enormous heat far beyond anything that a group of hunters and gatherers could ever generate on their own.”

Natural sources such as fire or volcanism have also been ruled out because they cannot reach the required temperatures. Lightning does reach temperatures that melt sediments and produce glass, but it also creates magnetic imprints that are not present in Abu Hureyra’s melt glass.

“This cannot be the result of fires,” said Peter Schultz, a geologist and planetary scientist at Brown University in Rhode Island who wasn’t involved in the new study. “Their results strongly support their conclusions that an impact or, more likely, airburst occurred in the region.”

“Those temperatures would turn your car into a molten pool of metal in less than a minute,” West said.

Abu Hureyra lies at the easternmost sector of what is known as the Younger Dryas Boundary strewn field, a series of sites in the Americas, Europe, and the Middle East where evidence of a cosmic impact occurring toward the end of the Pleistocene has been found. This evidence includes a carbon-rich layer known as the “black mat” that contains large amounts of impact-generated nanodiamonds, metallic spherules, and higher than usual concentrations of such rare elements as iridium, platinum, and nickel. It also contains charcoal, hinting at widespread wildfires that might have incinerated up to 10% of all the forested areas on the planet.

The Younger Dryas Boundary impact hypothesis claims that the impact altered Earth’s climate, causing a cold spell that lasted for 1,300 years. Temperatures plummeted by 10°C on average, and the climate became drier, particularly in the Middle East.

Some researchers think that the impact and ensuing climate change might have accelerated the extinction of most large animals on the planet, including mammoths, saber-toothed cats, and American horses and camels. It might also have upended the Clovis culture in North America, which disappeared at about that time.

“I don’t think the Abu Hureyra people necessarily invented this, but Abu Hureyra is the earliest site where we could say that something like systematic agriculture really is getting on the way.”

Radiocarbon dating at Abu Hureyra revealed that the village was rebuilt very shortly after the impact by people who used the same kind of bone and flint tools as the settlement’s first occupants. “There was absolutely no change in the cultural equipment,” Moore said, which suggests that it was the same group of people who reestablished the village. Maybe, Moore thinks, some members of the village were out hunting or gathering food and were able to return.

Only, this time they made substantial changes to their economy. “I don’t think the Abu Hureyra people necessarily invented this,” Moore said, “but Abu Hureyra is the earliest site where we could say that something like systematic agriculture really is getting on the way.”

“In the utterly changed climatic circumstances, they began to farm, they started to cultivate fields of rye and then, in time, wheat and barley, and eventually, they also started into livestock keeping with sheep and goats,” Moore said. In time, “the thing developed into an enormous settlement with several thousands of inhabitants, and it became quite the dominant village in that part of Syria.”