Elliza Hittman’s coming-of-age story about a teenager seeking an abortion is heartbreaking and painfully authentic. Hittman has described her film as “a narrative about a girl carrying around a lot of pain and burden, and the lonliness of it all". 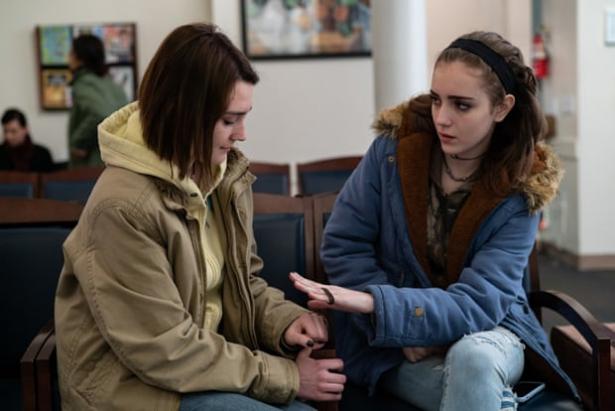 From Eliza Hittman, the remarkable writer-director of It Felt Like Love and Beach Rats, comes another drama that manages to blend the gritty authenticity of a documentary with the poetic sensibility of pure cinema. In her impressively measured and beautifully understated third feature, Hittman tells an oft-hidden story of reproductive rights – an age-old issue that has urgent contemporary relevance. Yet Never Rarely Sometimes Always never feels polemical. On the contrary, it is perhaps best described as a perfectly observed portrait of female friendship; a coming-of-age story with road-movie inflections, piercingly honest and deeply affecting.

Feature first-timer (and accomplished musician) Sidney Flanigan is superb as Autumn, a 17-year-old from Pennsylvania who discovers that she cannot get an abortion in her home town without parental consent. Quietly desperate, Autumn reluctantly confides in her more outgoing cousin Skylar (rising star Talia Ryder, soon to be seen in Spielberg’s West Side Story), who agrees to accompany her across state lines to New York. The pair imagine that the trip will be brief but find themselves spending days and nights on the streets, waiting for the procedure that Autumn was denied in Pennsylvania.

Inspired by “these untold journeys that women take” (Ann Rossiter’s Ireland’s Hidden Diaspora: The “Abortion Trail” and the Making of a London-Irish Underground, 1980-2000apparently proved an instructive work), Hittman’s drama may be fictional, but it is firmly rooted in factual research. Like Kitty Green’s current release The Assistant, everything about Never Rarely Sometimes Always has a matter-of-fact veracity: from heartbreaking early scenes in which we see Autumn helplessly punching her own bruised stomach to her very different experiences at a pregnancy centre in Pennsylvania and a Planned Parenthood clinic in Brooklyn.

Brief scenes of anti-abortion activists picketing clinics remind us of the crisis facing women’s rights in Trump’s increasingly retrogressive America. Yet, as with her previous features, Hittman’s primary focus is her characters – their lives, their experiences, their dreams and disappointments. Early scenes of Autumn and Skylar in their home town, where both work part-time in the local grocery store, are an object lesson in how to convey vast amounts of information with minimal dialogue; snapshots of an environment that has shaped the lives of these two very different characters.

Significant, too, that the only time Autumn really seems to verbalise her feelings is when she plays a solo version of He’s Got the Power at the school talent contest, turning the Exciters’ upbeat 60s hit into a plaintive ballad (“He makes me do things I don’t wanna do”), provoking cries of derision from the audience, followed by an awful moment of emptiness, and then a steely continuation through barely restrained tears.

Hittman has described Never Rarely Sometimes Always as “a narrative about a girl carrying around a lot of pain and burden, and the loneliness of it all”. That loneliness is certainly a key part of the film’s emotional palette, captured with great insight and understanding. Yet ultimately it is the growing bond between Autumn and Skylar that sticks in the mind, beautifully expressed in a strange moment of silent hand-holding that quite took my breath away.

Plaudits to French cinematographer Hélène Louvart, who did such sensual work on Beach Rats, and who here manages to capture moments of intense intimacy in unobtrusive fashion. In a film in which so much is expressed through minute gestures, Louvart keeps a remarkable balance between the geography of these characters’ faces and that of the ever-changing landscape through which they pass. Through her camera, we become both observers and participants – watching these young women’s lives but also empathetically experiencing their shared journeys.

The result is a film that combines the melancholy magic of John Schlesinger’s Midnight Cowboy with the humanist artfulness of the Dardenne brothers’ finest neorealist works. Perfectly pitched and sensitively played, this is truthful, powerful and profoundly moving fare from a film-maker at the very top of her ga