In the wake of former UAW President Gary Jones pleading guilty last week to stealing more than $1 million, U.S. Attorney Matthew Schneider is demanding 'serious action' on reform inside the United Auto Workers 'within a couple of months.' 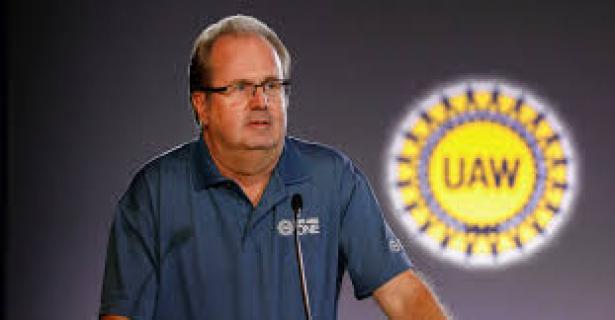 The years-long federal investigation into United Auto Workers corruption is on the clock — and how it ends increasingly may depend on the re-election prospects of President Donald Trump in the industrial Midwest.

In the wake of former UAW President Gary Jones pleading guilty last week to stealing more than $1 million as part of a racketeering scheme, U.S. Attorney Matthew Schneider signaled that time is running short for the union to implement sweeping reform or risk losing control amid a government takeover of the union.

U.S. Attorney Matthew Schneider is demanding 'serious action' on reform inside the United Auto Workers 'within a couple of months.'

"My patience has pretty much run out," Schneider told The Detroit News, even as he confirmed talks within the Justice Department of possible oversight of the union. "I would like to have some serious dialogue and serious action about reforming the UAW itself ... within a couple of months."

That's because the calendar is tightening for Schneider, a political appointee who stands to lose his job (as did his predecessor, Barbara McQuade) should Trump lose in the November election and January brings a new Democratic administration presumably more friendly to the UAW and organized labor.

The wild card here is the potential impact a federal takeover by the Trump Justice Department would have on the president’s bid for a second term in the battleground states of Michigan, Ohio, Pennsylvania and Wisconsin. Generally speaking, the president considers union rank-and-file to be a critical part of his base, meaning a federal takeover of the UAW just before the election could be especially fraught.

As much as members express outrage over the documented financial chicanery of roughly a dozen leaders and staffers, a civil racketeering case that essentially installs the Justice Department atop the union likely would inflame partisan sentiment in the runup to the election. How sentiment would divide in the ballot box is a risk Team Trump may not want to take.

Seizing control of the union could prove unpopular throughout the ranks, tantamount to a Republican declaration of war against a cornerstone of the American labor movement. Or it could be touted by the government — and the Trump campaign — as the president siding with the rank-and-file against corrupt leadership that reflexively supports Democrats and policies harmful to workers' interests.

The upshot: Both sides — Schneider's public corruption team and the UAW led by President Rory Gamble — are on the clock. The difference is when their respective times expire. Practically speaking, with the general election campaign in full swing by Labor Day, Schneider has just a couple of months to bring the sprawling corruption case to a close.

Gamble? He's got roughly two more years to "save" his union, as he's said often, and avert a government takeover akin to federal oversight of the International Brotherhood of Teamsters 30 years ago. That deal engineered direct elections of senior officers, a move Schneider has said he would like to see enacted by the UAW, as well as the early retirements of a cadre of union officials.

Thinking UAW leadership — including most members of the governing International Executive Board — could avoid a similar fate would be the triumph of hope over evidence and Schneider's on-the-record commentary surrounding the case. Cultural change in an institution as hierarchical and tradition-bound as the UAW requires changing people as much as process, one reason Gamble's effort to reform the union without government help is so challenging.

Time is on neither side. Stalling by a Gamble-led UAW in the hopes Trump would be replaced by a more labor-friendly Biden administration could be an enormous mistake if Schneider uses the foot-dragging to justify and deliver a civil racketeering case and if, second, the president wins re-election. That's a distinct possibility given the dynamics of the economy, ongoing civil unrest and the coronavirus pandemic.

What is clear is that both sides are motivated to do what each have been threatening — to meet at the highest levels to determine whether the union's reforms so far, and others it might offer, could square with the U.S. Attorney's vision for cleaning up the union Walter Reuther built for rank-and-file members, not leadership.

Jettisoning slates effectively chosen by the powerful Reuther Administrative Caucus for the past 70 or so years in favor of one-person, one-vote direct elections would require an amendment to the union's constitution. More precisely, however, what's more important here: how the president and secretary-treasurer are elected or who is elected?

Both, ideally. But if the sordid results of the past few years are any indication — and they are — they trace corruption, self-dealing and charges of nepotism within the UAW's top leadership to management choices made by Gamble's three predecessors.

Secondly, what worked for the Teamsters 30 years ago, when labor was more transcendent than it is today, may be less effective for a union with representation in autos, suppliers, farm and construction equipment, gaming, academia and the public sector, among others.

And, third, no one named Reuther embodying the legacy and credibility of the legendary president stands ready to ascend to the big office in Solidarity House. Not the way James P. Hoffa, son of the longtime Teamsters boss, assumed leadership of the union during its decades of federal oversight.

The UAW has few options. None of them is particularly good, and they all will require the union, its current and future leadership to reckon with a past and present as it it — not as they want it to be.