labor It's Time to Kick Police Unions Out of the Labor Movement. They Aren't Allies

Let’s put police unions on a raft and set them adrift. They can reapply for solidarity if they stop abusing the rest of us. 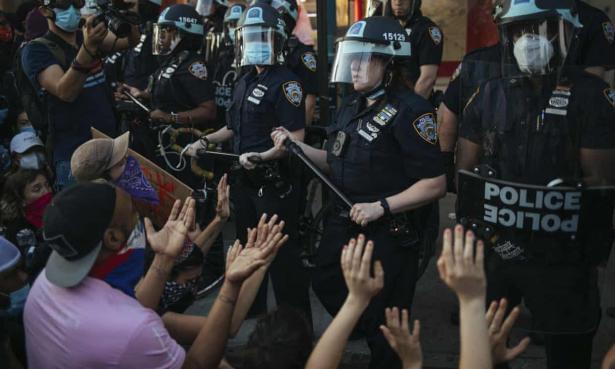 ‘For centuries, the police have in fact been the tool of oppression wielded to crush working people.’ , Photograph: Kevin Hagen/AP

The ultimate power of the labor movement lies in solidarity. Together, working people are strong. So what can the movement do in this moment of national struggle against racism and police violence? The obvious answer is to deny the power of solidarity to police unions, which function as barriers to the very reforms that Americans are now fighting for. The time has come to put police unions on a raft and set them adrift. Perhaps they can reapply for solidarity if they ever stop abusing the rest of us.

Earlier this week, my union, the Writers Guild of America, East (WGAE), formally called upon the AFL-CIO – America’s largest union coalition, representing 55 unions, including us – to expel police unions from its ranks. (I am one of the 21 elected WGAE council members who unanimously voted to approve this resolution, but I speak here only for myself.) We do not dispute the right of anyone to have a union, but police unions are incompatible with the AFL-CIO’s mission “to vanquish oppression”. For centuries, the police have in fact been the tool of oppression wielded to crush working people. A common thread that runs from striking union members getting their heads bashed in to the tragedy of George Floyd is the presence of aggressive and unaccountable police.

It is worth noting that the AFL-CIO’s own constitution says that affiliated unions can be kicked out if their activities “are consistently directed toward the achievement of the program or purposes of authoritarianism, totalitarianism, terrorism and other forces that suppress individual liberties and freedom of association and oppose the basic principles of free and democratic trade unionism”. When I read those words, I conjure up the image of the combative riot police who unjustly arrested multiple journalists and WGAE members who were peacefully covering the recent protests against police violence.

For centuries, the police have in fact been the tool of oppression wielded to crush working people

Unfortunately, getting police unions out of the broader labor movement will not be easy. The AFL-CIO immediately rejected the WGAE’s resolution with little discussion. Why? It is not as simple as the fear of losing members – the International Union of Police Associations has 100,000 members, a drop in the bucket of the AFL-CIO’s 12.5 million union members. Rather, the union establishment fears for its own existence.

To understand this, you have to keep in mind the fact that business interests have been waging a very successful campaign to destroy all unions for decades now. Union membership among private sector workers has plummeted to less than 7%; among public sector workers, however, more than 33% are in unions. Government workers are by far the strongest sector of organized labor. And big unions are determined not to allow any sort of attack on public sector union membership – even if those unions are police unions, who are protecting cops who beat and kill the rest of us.

Lee Saunders is the head of AFSCME, the most powerful public sector union in the AFL-CIO, which represents 1.4 million state and local government workers, including some cops. In an op-ed this week, he wrote: “Just as it was wrong when racists went out of their way to exclude black people from unions, it is wrong to deny this freedom to police officers today.” Fine. But we don’t need them inside of our labor movement, poisoning it for everyone else. (There is a related strain of argument that says that if we push police out of the labor movement, we’ll lose the ability to influence them for the better. This is laughably disconnected from reality. How has that worked out for us so far? Perhaps if we wait another hundred years, we’ll see some progress?)

This seems simple enough. It is sad to see the union establishment ruled more by fear of losing what they have than by a vision for a better future. Millions of Americans have taken to the streets to cry out for justice. Not only is it the responsibility of the labor movement to stand next to them – it is the responsibility of the labor movement to be them. Union membership has been declining for decades, as inequality rises. This is not a coincidence. A revival of working-class power is vital to fixing many of the underlying issues that have broken our nation. (For example, unions are the only thing that has ever helped close the wage gap between black and white workers.)

The energy that has flowed into the protests must also flow into the labor movement. In order for that to happen, unions and the AFL-CIO need to welcome everyone in. That can’t happen when the cops are guarding the door. Time to make a choice. People over police.

Americans have had enough ...

... and are marching for justice in unprecedented numbers. In small towns and big cities across the country, thousands of people are giving voice to the grief and anger that generations of black Americans have suffered at the hands of the criminal justice system. Young and old, black and white, family and friends have joined together to say: enough.

The unconscionable examples of racism over the last weeks and months come as America's communities of color have been hit hardest by the coronavirus and catastrophic job losses. This is a perfect storm hitting black Americans. Meanwhile, the political leadership suggests that “when the looting starts, the shooting starts”. The president who promised to end the “American carnage” is in danger of making it worse.

At a time like this, an independent news organisation that fights for truth and holds power to account is not just optional. It is essential. Because we believe every one of us deserves equal access to fact-based news and analysis, we’ve decided to keep Guardian journalism free for all readers, regardless of where they live or what they can afford to pay. This is made possible thanks to the support we receive from readers across America in all 50 states.

You’ve read more than 22 articles in the last six months. Our business model is coming under great pressure from an unprecedented collapse in advertising revenues, and we’d love your help so that we can carry on our essential work. If you can, support the Guardian from as little as $1 – and it only takes a minute. Thank you.