Spike Lee Has Made His Most Ambitious Film Yet

Da 5 Bloods is a searing Vietnam War epic that speaks to this moment—and it’s on Netflix, so viewers can revisit it again and again.

June 14, 2020 David Sims The Atlantic
Printer friendly
Spike Lee Has Made His Most Ambitious Film Yet Published June 14, 2020 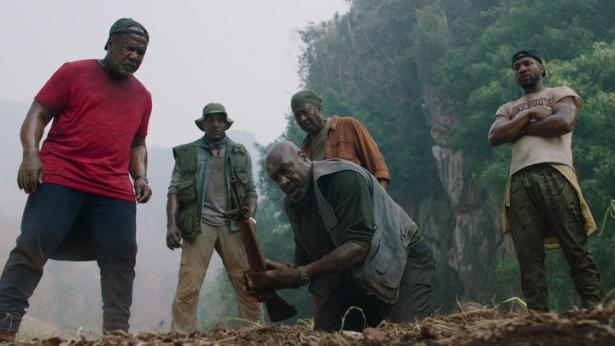 "Da 5 Bloods" is a story about a buried past, following a group of black Vietnam War veterans as they travel back to their old battleground to find the body of their fallen squad leader., Netflix

“War is about money. Money is about war. Every time I walk out my front door, I see cops patrolling my neighborhood like it’s some kind of police state. I can feel just how much I ain’t worth.” So says Stormin’ Norman (played by Chadwick Boseman), the mythic figure at the center of Spike Lee’s bombastic war epic Da 5 Bloods (out on Netflix today). Norman says those words in 1970s Vietnam, and this film was made before the current wave of global protests against police brutality, but the sentiment feels urgent. Lee, in his inimitable way, is prodding his audience to pay attention and realize that, even as history marches on, the same battles are still being fought.

Lee is not a taciturn filmmaker. His cinematic language includes bravura flourishes such as characters looking down the camera to address the audience, signature double-dolly shots, the interpolation of real-life footage, and beautifully florid monologues that flesh out deeper themes. Since he emerged in the ’80s, Lee has been one of American cinema’s most compelling filmmakers, but there’s a reason his grandiloquent style has been so resonant of late (his last film, BlacKkKlansman, earned him his first competitive Oscar). His agitation matches a world of headlines blaring unrelentingly dystopian news.

Read: With ‘BlacKkKlansman,’ Spike Lee sounds the alarm about America’s past and present

Da 5 Bloods is a story about a buried past: It follows Vietnam War veterans Paul (Delroy Lindo), Otis (Clarke Peters), Eddie (Norm Lewis), and Melvin (Isiah Whitlock Jr.) as they travel back to their old battleground to find the body of Norman, their fallen squad leader. Also in their sights is the pile of gold bricks interred with him—a CIA cache intended for bribing Vietnamese rebels that Norman’s unit found in the ’70s. The group’s journey is both a decades-later rescue mission and a treasure hunt. The men have an opportunity to heal the wounds of the past but also make millions. As with many tales of legendary fortune, the wealth at stake quickly exposes stark divisions among the heroes. Lee connects his movie to an earlier film that grappled with such ideas, The Treasure of the Sierra Madre, even recycling its most famous line about “stinking badges.”

Still, Da 5 Bloods is not a work of gritty realism. As the four squad members venture into the jungle, Lee flashes back to their wartime experiences, having the same actors (all of whom are in their 50s and 60s) play the “young” version of their character without any glitzy de-aging technology or prosthetic makeup. Da 5 Bloods’ production value is very high—it must be one of the most expensive movies Lee has ever made—and this flashback gimmick is clearly not a cost-saving measure but a thematic one. It’s a way to dramatize the men’s memories and how they’ve romanticized them with age, imagining themselves still able to perform such acts of violent heroism. 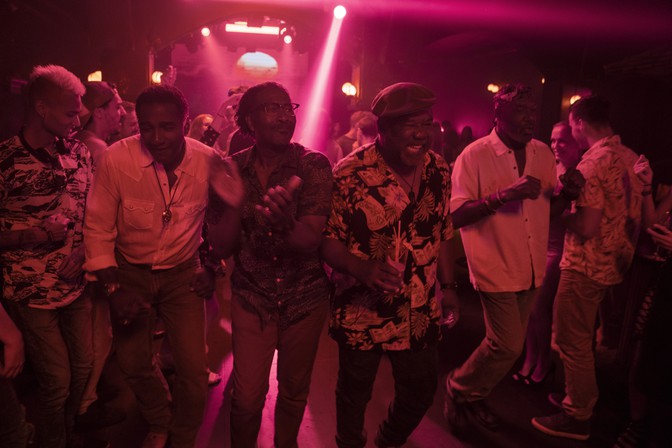 Da 5 Bloods tries to tackle the entire sweep of American imperialism from the Vietnam War on.

Paul, in particular, has never let go of his high-octane past. He’s now an avowed Trump supporter, prone to spouting off about illegal immigration and bringing up his war service as a badge of honor. Lindo’s performance is the pulsing center of Da 5 Bloods, focusing an occasionally meandering story (the film runs 154 minutes long). A frequent collaborator of Lee’s, Lindo throws himself into Paul’s sublimated fury; the ex-soldier is driven by trauma and rage at the way he and his African American compatriots were vilified for their participation in Vietnam. While the other characters are on this mission out of nostalgia, greed, and regret, Paul almost seems out for revenge against an enemy that no longer exists (and perhaps never did).

Though Hollywood has churned out many Vietnam narratives over the past 50 years, very few have seriously dug into the experience of black servicemen in that war. The most widely seen is the Hughes brothers’ wildly underrated Dead Presidents, a searing but brutally bleak 1995 crime thriller that was largely about the difficulties black veterans faced after returning home from the front. But Da 5 Bloods has an even wider scope, trying to take in the entire sweep of American imperialism from Vietnam on, and confronting how black citizens sacrificed their lives for a country that didn’t care about them.

Lee cuts in footage of Muhammad Ali’s famous anti-war statements, the Kent State and Jackson State massacres, the photographed execution of the Viet Cong officer Nguyễn Văn Lém. The director’s camera also visits with real activists of the modern day. He splices all these clips around fictionalized speeches from Stormin’ Norman, an idealized figure who soliloquizes about America’s sins, and the modern-day caper that Norman’s squad embarks on, which grows more dangerous as they venture deeper into the jungle in search of the buried gold. Lee and his co-writer Kevin Willmott (adapting an earlier script by Danny Bilson and Paul De Meo) want to emphasize the cycles of violence present in every timeline. Though Vietnamese soldiers were once their adversaries, they’re not really presented as enemies, but rather as participants in the same pointless conflict waged by imperial powers.

I’ve watched Da 5 Bloods twice already and can easily imagine myself revisiting it several more times; such is the power of a film debuting on Netflix, where subscribers can access it with the touch of a button. The crackling, vibrant visuals would play beautifully on a huge screen, shifting film stocks and aspect ratios as the story moves backwards and forward in time. But if the necessities of the moment mean that Da 5 Bloods won’t get the big theatrical run it deserves, its bold immediacy still hits hard on a smaller screen. Hollywood has made many stirring tales of war heroism, of honor gained and lives lost, and even of the failures of the countries that sent men into battle. But there are shockingly few stories like this one.

David Sims is a staff writer at The Atlantic, where he covers culture.

For more than 160 years, The Atlantic has been committed to our founding credo: to be "of no party or clique." We seek debate over agreement, fact over favor.

When you become a subscriber, there’s no cap on the number of Atlantic stories you can read—and each subscription comes with a money-back guarantee.