Analysis finds of the 15 large US cities in which a majority of officers are non-white, only one – Memphis – has a union leader who is black 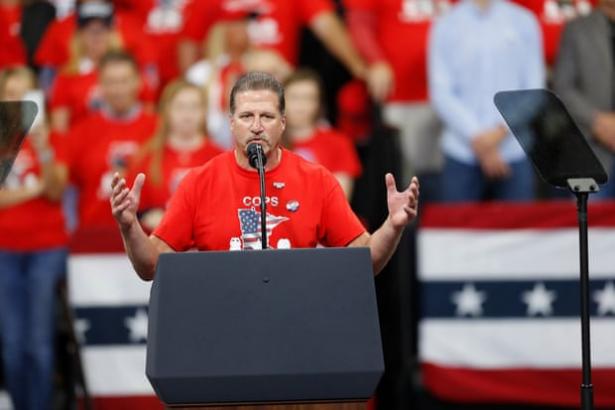 Bob Kroll, a Trump ally and the president of the Police Officers Federation of Minneapolis. , Star Tribune/Getty Images

This article was published in partnership with the Marshall Project

The head of a police union in Baltimore called Black Lives Matter protesters a “lynch mob”. One in Philadelphia referred to demonstrators as “a pack of rabid animals”. Another has labeled St Louis’s democratically elected prosecutor, who is black and supports police reform, a “menace to society” who must be removed – “by force” if necessary.

All three union leaders also have this in common: they are white.

In many cities, police officers are more likely to be white than the citizens they are sworn to protect and serve. But this is especially true of the presidents of their unions, the Marshall Project found in an analysis of demographic data from major US police departments. Of the 15 large American cities in which a majority of officers are non-white, only one, Memphis, has a union leader who is black.

Only about a fifth of the Miami-Dade police department’s officers are white, but the head of its union is. In Washington, DC, just a third of police are white, but the union chief is. It’s a similar story in many other largely black cities such as Atlanta, New Orleans, Houston and Los Angeles: most police are not white, but the person who represents their interests – who publicly speaks for them – is.

The same is true of the entire leadership structure of many police unions and associations. The Chicago Fraternal Order of Police has no black officers among its top brass, the union confirmed. California’s statewide FOP appears to have an executive board consisting of nine white men – and one black man serving as the chaplain. (The board did not respond to requests for comment.)

“It is to the detriment of policing, period, that our community is not represented at police union tables,” said Sonia Pruitt, chairperson of the National Black Police Association. These unions are so powerful that “if they had leaders who said, ‘Listen, what happened to George Floyd was absolutely terrible,’ officers around the country would follow.”

Like other labor organizations, many police unions negotiate salaries and benefits for officers as well as fight for job protections. The role of all union chiefs is to go to battle for workers, so they are often pugnacious and resistant to any attack on their members, whether representing police, teachers, truckers or others.

But this is particularly true of police union leaders, who have long protected members accused of brutality and racism by winning employment contracts that make it difficult or impossible to fire or discipline them. They have also neutered internal-affairs units and civilian review boards, both of which also try to hold bad officers accountable.

Meanwhile, police unions have paid for warrior training, instead of de-escalation training, for the officers they represent. And they have helped scrub racist officers’ social media pages as a further way of protecting them.

Jim Pasco, executive director of the Fraternal Order of Police, responded to a question about why there is so little minority representation in police union leadership with an email saying, “I don’t respond to questions which telegraph a negative story.”

Vince Champion, the south-east regional director of the International Brotherhood of Police Officers, said he has never heard black officers complain that they don’t trust him to represent their interests because he is a white man.

“We don’t see color, and we don’t see race,” said Champion, who represents officers in the Atlanta police department. “We see blue. As long as you are a fellow officer, your lifestyle doesn’t matter.”

Black officers often have no choice but to join these unions, either because it is mandatory or because they need the collective bargaining power to negotiate their wages and promotions, experts said.

But then the union defends white officers who have committed violent acts against black citizens – “and you realize that your values, your community values, as a person who probably has experienced that same kind of treatment when your uniform is off, are not being represented at the top”, said Chris Burbank, former police chief in Salt Lake City and now vice-president of law enforcement strategy at the Center for Policing Equity, an organization that works with local police departments on race issues.

These diverse views are almost never presented when a police union chief steps up to the microphone following an event like the killing of George Floyd.

“Do I ever remember a person of color on my executive board? I don’t,” said Brendan Cox, former police chief in Albany, New York, and also a former union leader there. “I’m white, male, Irish Catholic, which is not exactly the hardest thing to be in a police department,” he said. “Officers of color who want a leadership position have to prove themselves in a completely different way.”

This is in part why, in dozens of cities, a separate black police officers’ association also exists. But these are often smaller groups with less influence over how the department operates and less visibility when a major incident occurs.

There are several reasons for the disparities at the head of police unions, law enforcement experts and former police chiefs said. It starts with who gets recruited and encouraged to take leadership positions, they said. And when black candidates emerge for these top roles, some white officers are suspicious.

“They think, ‘Oh, a black cop isn’t going to be the one to be the strongest defender of us,” said Samuel Walker, a criminology professor at the University of Nebraska Omaha who has written more than a dozen books about police accountability and civil liberties.

“And then black officers in turn realize that that’s the perception, and just decide it’s not worth even running.”

In recent decades, there has been an increase in the number of black and Latino police officers nationally, but that demographic change has yet to be reflected in the higher ranks, experts and former chiefs said. The older guard is still more likely to be white, to know enough of the union’s insiders to have a chance to lead it.

To be sure, white police can be open to reform. And if elected to union leadership, black officers may not necessarily take reform-minded stances. Some research has suggested that black officers are nearly as likely to kill black people as white ones are, suggesting that racial bias is systemic and that representation alone won’t solve the deep-seated problems in policing.

“Black officers are not a monolith – I think most of us like to talk things out more with the community, and aren’t as angry with the community all the time. But others buy into that ‘us v them’ policing mentality,” said Pruitt of the National Black Police Association.

Michael Williams, president of the Memphis Police Association, offers the only case study of a black union chief in a major majority-black city. While he has defended police officers ferociously at times , he has also shown what nonwhite police union leadership can bring to the table.

After US marshals fatally shot a 20-year-old black man named Brandon Webber in 2019, angry protesters clashed with law enforcement in the streets of Memphis. But Williams, who did not respond to requests for comment, struck a more measured tone than police union leaders often do. In an interview with the New York Times, he said that police officers are too often blamed for social ills beyond their control, from failing schools to joblessness and homelessness. “There is unrest in this city,” he said, “and a lot of it is systemic problems.”

Eli Hager is a Staff Writer at The Marshall Project, a nonprofit news organization that reports on the U.S. criminal justice system. He covers juvenile justice issues, family court, poverty and education, as well as for-profit prisoner transportation, and his work has appeared in the New York Times, the Washington Post, the Guardian, the Atlantic, and elsewhere. Hager also solicits and edits journalism by incarcerated writers for The Marshall Project's weekly "Life Inside" feature.

Weihua Li is a data fellow at The Marshall Project. She uses data analysis and visualization to tell stories about the criminal justice system. She studied journalism and comparative politics at Boston University and recently graduated from Columbia University with a master's degree in data journalism.

The Digital Subscription
Support The Guardian and enjoy two innovative apps and ad-free reading on theguardian.com. The complete digital experience from The Guardian.