Secrets of the Y Chromosome

It’s not just what makes males into males. The sex chromosome also influences health in hidden ways, some experts believe, and may even explain why men have shorter life spans. 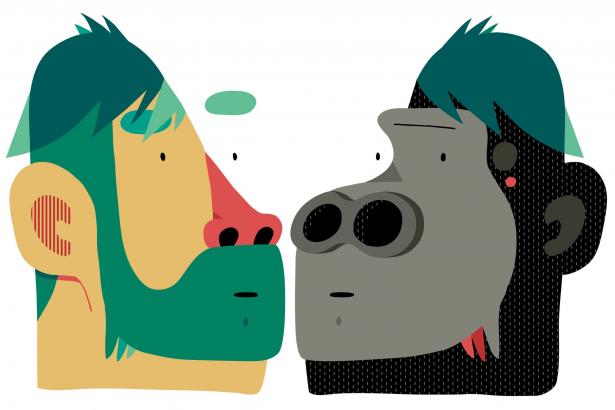 In advance of Father’s Day, let’s take a moment to sort out the differences and similarities between “Dad jeans” and “Dad genes.”

Dad jeans are articles of sex-specific leisure clothing, long mocked for being comfy, dumpy and elastic-waisted but lately reinvented as a fashion trend, suitable for male bodies of all shapes and ages.

Dad genes are particles on the sex-specific Y chromosome, long mocked for being a stunted clump of mostly useless nucleic waste but lately revealed as man’s fastest friend, essential to the health of male bodies and brains no matter the age.

Yes, dear fathers and others born with the appurtenances generally designated male. We live in exciting times, and that includes novel insights into the sole chromosomal distinction between you and the women now prowling the aisles at the hardware store. (“Didn’t he say he could use a new bow saw? Or some halogen light bulbs?”)

Researchers have discovered that, contrary to longstanding assumptions, the Y chromosome is not limited to a handful of masculine tasks, like specifying male body parts in a developing embryo or replenishing the sperm supply in an adult man.

New evidence indicates that the Y chromosome participates in an array of essential, general-interest tasks in men, like stanching cancerous growth, keeping arteries clear and blocking the buildup of amyloid plaque in the brain.

As a sizable percentage of men age, their blood and other body cells begin to spontaneously jettison copies of the Y chromosome, sometimes quickly, sometimes slowly. That unfortunate act of chromosomal decluttering appears to put the men at a heightened risk of Alzheimer’s disease, leukemia and other disorders.

“I’m quite certain,” said Lars Forsberg, an associate professor of medical genetics at Uppsala University in Sweden, “that the loss of the Y chromosome with age explains a very large proportion of the increased mortality in men, compared to women.”

Other researchers are tracing the evolution of the Y chromosome and comparing the version found in modern men with those of our close relatives, both living and extinct.

Takeaway A: We can drop the man-equals-caveman caricature. Although human DNA has been found to contain vestiges of our dalliances with Neanderthals from about 50,000 years ago, none of those genomic imprints are on the human Y chromosome.

The immune system analogy may be particularly apt. Fernando Mendez, a geneticist, and his colleague Carlos Bustamante of Stanford University reported that one of the notable differences between the human and Neanderthal Y chromosomes lies in a gene linked to transplant rejection.

Whatever the reason for the purification of the human Y over time, women’s equivalent X chromosome does not appear to have been similarly cleansed, with the result that women on average may be slightly more Neanderthal than men, which could explain our comparative fondness for animal print shoes.

Yes, but apercu B: Hang on to the gorilla suit. From a global genomic perspective, our closest living relative is the chimpanzee, followed by the gorilla. When it comes to the Y chromosome, however, humans look considerably more Magilla than Bonzo.

Kateryna Makova, director of the Center for Medical Genomics at Penn State University, and her colleagues recently determined that if you line up a man’s Y chromosome with a chimpanzee’s, only about 70 percent of the two spans will stick together. Align a human Y with a gorilla’s, and 83 percent of the paired chromosomes will comfortably conjoin.

The researchers propose that the observed patterns could be the result of mating practices. Among gorillas, fertile females generally mate with one male at a time — the local silverback. Women, too, are mostly, though by no means unerringly, monogamous.

By contrast, female chimpanzees mate wildly and promiscuously during each ovulatory cycle. As a rule, female promiscuity promotes sperm competition among males, and because the Y chromosome oversees sperm production, Dr. Makova said, the chimpanzee Y is likely evolving at hyperspeed to keep up.

David Page of the Whitehead Institute in Cambridge, Mass., a world authority on the male sex chromosome who could well be called the Y Guy, believes the Y and the X “each deserve a full novel of their own.”

Whether in the double-X format that specifies a female fetus, or the X and Y pair found in males, the sex chromosomes stand apart from the other 22 normal chromosome pairs, or autosomes, that constitute the complete human genome and that are stuffed into nearly every cell nucleus of the body.

That tendency toward molecular aloofness led to the initial designation of the female chromosome as “X,” for strange or unknown; the Y was simply named for the next letter in the alphabet.

The Y chromosome is a true chromosomal outlier, holding a fraction of the number of genes found on all the other chromosomes, including the X. Its genetic impoverishment is a legacy of its role in sex determination.

Among our pre-mammalian forebears, an offspring’s sex was dictated as it is today in crocodiles and turtles: not by genetics, but by temperature.

Among turtles, if an egg develops in warm conditions, the embryo turns female. If it’s cooler outside, the embryo becomes male.

But with the rise of internal gestation and its uniform weather conditions, embryos needed another clue for sex development. That demand led to the evolution of the male sex determination gene, called sry, and the related need to keep the male and female genetic programs segregated.

As a result, the Y chromosome on which sry was located could no longer freely recombine and swap its pieces with its corresponding X chromosome, as the other chromosomal pairs do to freshen things up whenever a new egg or sperm cell is created.

Lacking the standard repair system of chromosomal recombination, genes on the Y chromosome began to decay and were eventually tossed out or reassigned to other chromosomes.

“The erection of ‘trade barriers’ allowed X and Y to follow divergent paths,” Dr. Page said. “The X chromosome could continue to recombine with another X chromosome in the making of eggs, but the Y chromosome followed an isolationist strategy, which led to its rapid decline.”

It’s not total isolationism: The tips of the X and Y chromosome can still swap pieces, but most of Y is off limits to trans-chromosomal barter and amendments.

“There’s a striking loneliness to the Y chromosome,” said George Vassiliou of the Wellcome Trust Sanger Institute and Cambridge University.

Nevertheless, the Y still has powers to divulge. After speculation in the 1990s that the Y chromosome was still shrinking and might someday vanish altogether — leaving who knows what sex determination protocol in its wake — scientists are now confident the chromosomal attrition has ended.

“It’s dynamic but stable,” said Melissa Wilson Sayres, who studies sex chromosomes at Arizona State University. “It may lose a gene or two, but it may also gain sequences. It’s not a dead end.”

Moreover, new research indicates that the Y chromosome can patch up some internal problems without benefit of free trade and recombination with the X — by shuffling around duplicate copies of genes on its own lonely span.

The Y also holds a host of genes that have yet to be fully appreciated or understood.

Dr. Vassiliou and his colleagues reported last month on a Y-specific gene called UT-Y that protects against leukemia in mice and likely performs a similar role in men. The chromosome more generally is committed to its bearer’s health and persistence.

Dr. Forsberg of Uppsala University and his colleague Jan Dumanski have published a series of papers about the phenomenon called L.O.Y., or loss-of-Y, in which men’s blood and other cells mysteriously start shedding their Y chromosomes with age.

Smoking hastens the depletion of the Y chromosome in men’s blood cells, the researchers have found. Men with a high percentage of Y-free cells — 10 percent or more — are at a heightened risk of dying in the near future, compared with similarly aged men whose cells have hung onto their Y’s.

And men with Alzheimer’s disease are more likely to be L.O.Y. men than are their non-demented cohorts.

The researchers propose that a weakening of the immune system may explain the many perils of L.O.Y. When white blood cells that serve as immune sentries lose their Y chromosome, Dr. Dumanski said, their surveillance skills falter.

They fail to clean up messes on arterial walls or to spot cancer cells in need of destruction. They allow plaques and tangles to accrete in the brain.

Dr. Dumanski admitted that the association between the loss of Y and disease has yet to be definitively proved, and that much remains to be understood about what’s driving the chromosomal loss in blood cells and how it might be stopped.

“It’s still early, and there’s still a lot of skepticism,” he said. “It will take a couple more years before the idea is widely accepted, but we are quite convinced ourselves that we are right.”

At which he laughed — and admitted his extreme self-confidence could well be the result of the Y chromosome that made him a man.

Natalie Angier became a columnist for Science Times in January 2007. Ms. Angier’s column focuses on the fundamentals of science, using news events to explore the basic principles that govern the natural world. She began writing for The Times in 1990, covering genetics, evolutionary biology, medicine and other subjects.

She was born in New York City on Feb. 16, 1958, and grew up in the Bronx and New Buffalo, Mich. After attending the University of Michigan for two years, she transferred to Barnard College in New York, from which she graduated with high honors in 1978. While in college, she studied English, physics and astronomy. At the age of 22, she was hired as a founding staff member for Discover, the science magazine that Time Inc. started in 1980.

She has also been the senior science writer for Time magazine, an editor at the women’s business magazine, Savvy, and a professor at the New York University's Graduate Program in Science and Environmental Reporting.

Her first book, “Natural Obsessions” (Houghton Mifflin, 1988), an inside look at the high-throttle world of cancer research, was named a notable book of the year by The New York Times and the American Association for the Advancement of Science.

In 1991, she won a Pulitzer Prize in the category of beat reporting. She has also received numerous other honors, among them the AAAS-Westinghouse award for excellence in science journalism, the Lewis Thomas Award for distinguished writing in the life sciences, the Exploratorium public understanding of science award, the Barnard College distinguished alumna award and membership in the American Philosophical Society.

Her writing has also appeared in The Atlantic, Smithsonian, National Geographic, The American Scholar, Parade, O magazine, Washington Monthly, Geo, Slate and many other print and online magazines. Her essays have been published in a number of anthologies, including “The Bitch in the House,” “Sisterhood Is Forever,” “The New Science Journalists” and “The St. Martin’s Guide to Writing.” She was the editor of the 2002 edition of “The Best American Science and Nature Writing” and the 2009 edition of “The Best American Science Writing.”

Ms. Angier is a voting member of the usage panel of The American Heritage Dictionary, and though she wholeheartedly believes that languages must evolve or die, she will never vote in favor of using “impact” as a verb.

A version of this article appears in print on June 12, 2018, Section D, Page 1 of the New York edition with the headline: Men Are Different: Here’s Y.