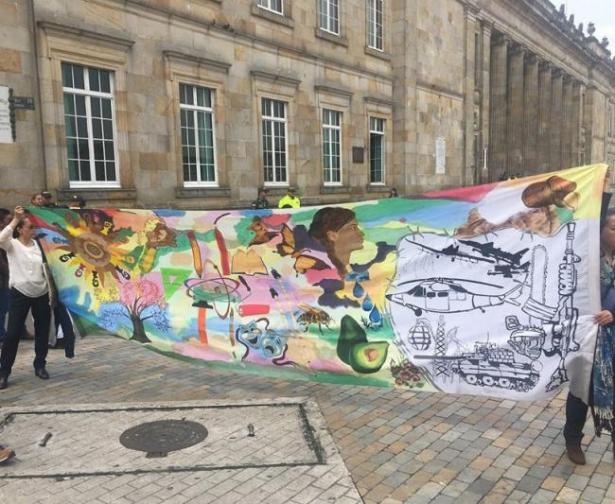 A 2019 protest in Bogotá, Colombia against military aggression in Venezuela. , Tom Power

Colombian soldiers and military brass have been implicated in a string of human rights violations in recent weeks. On May 1, Semana magazine reported that Colombian military illegally used U.S. military aid to spy on journalists and human rights defenders, including U.S. citizens. On June 4, Colombian armed forces carried out forced eradication of illicit crops, and injured six farmers. On June 25, seven soldiers confessed to gang raping a 13-year-old Emberá girl in Northern Colombia.

Yet the United States is only deepening its relationship with the Colombian military. On May 28, the U.S. Southern Command (SOUTHCOM) announced the deployment of the U.S. Security Force Assistance Brigade (SFAB) to Colombia to advise and train Colombian units in anti-narcotic missions. Colombians have spoken out against the security agreement, and the U.S. role in the country’s militarized drug policy. While Congressman Jim McGovern of Massachusetts has called for the suspension of U.S. military aid pending an audit, SOUTHCOM has further deepened the bilateral relationship.

“As a human rights defender and as a defender of the environment, the arrival of gringo troops to Colombia isn’t only a violation of our sovereignty, our constitution, and our nation’s laws,” said Isabel Zuleta, leader of the organization Rios Vivos, who lives near one of the areas where U.S. troops may be deployed. “It doesn’t take into account the whole history of armed conflict and socio-political violence that we’ve lived through.”

The area under cultivation of illicit crops, namely coca, has surged since 2013. The 2016 Peace Accords signed between the FARC guerillas and the Colombian government laid out a strategy of state investment to areas of illicit crop cultivation. But vulnerable small-scall farmers with few alternatives continue to grow coca. Trump has pressured Colombia to do more about the rise in illicit crops. Colombian President Iván Duque issued an executive order to resume aerial fumigations, using glyphosate in the forced eradication strategy. Aerial fumigations betray the spirit of the Peace Accord.

SFABs are designed to advise and assist operations in foreign nations. The first brigade was established in 2017 at Fort Benning, Georgia, and deployed to Afghanistan in 2018. Now they will be stationed in Colombia’s “future zones,” special militarized areas where 55 percent of Colombia’s illicit crops are cultivated. The unit “Tarea Conjunto Omegle” is one of the military units in these future zones and was involved in the operation which left farmers injured on June 4.

The deployment of 54 SFAB soldiers to Colombia further escalates this new phase of the drug war.

The deployment of 54 SFAB soldiers to Colombia further escalates this new phase of the drug war. In March, Trump said Colombia must resume aerial fumigations. On April 1 he announced a new counternarcotic strategy which implicitly aims to remove Venezuelan President Nicolás Maduro from power. The administration has sent U.S. warships to the Caribbean, and indicted Maduro on drug charges.

Three confederations of grassroots organizations, comprising over 400 different Colombian social movements, signed a communique demanding President Duque withdraw the U.S. troops. They say their presence violates the Colombian Constitution and that the U.S. military has not enhanced their security.

“On the contrary, we would like to call attention to the imminent risk to life and security this poses to peasant, Afro-descendent, and Indigenous communities that live in the so-called ‘future zones,’” the communiqué read.

Duque’s administration did not consult the Colombian Congress on the presence of foreign troops in the country, which he justifies saying that U.S. troops will not be carrying out combat operations.

Colombian Senator Iván Cepeda tweeted, “The Senate and Council of State must make a statement on the illegal presence of U.S. troops in our territory. This intervention is an overt aggression to our sovereignty, to the peace process in our territories, and a grand threat of transnational war.”

“How is this possible, how does this even thinkable?” said Zuleta of Ríos Vivos. “We feel that we don’t have a government who we can count on to protect our rights, a state that abandons us… There is no state, there is no democracy in Colombia.”

The grassroots members of these organizations feel unsafe with U.S. troops in their territory for the same reason communities of color in the U.S. feel unsafe with a militarized police force: a history of human rights violations.

The undercurrent of racism in the U.S. military and policing connects both North and South at Fort Benning, named after Confederate general Henry Benning.SFAB is based at Fort Benning, Georgia, which also houses the School of the Americas/WHINSEC, a military academy that has trained Latin American military officers for generations in counterinsurgency tactics and torture.

The undercurrent of racism in the U.S. military and policing connects both North and South at Fort Benning, named after Confederate general Henry Benning. Immigration and Customs Enforcement also trains there. Derek Chauvin, the police officer who murdered George Floyd, served at Fort Benning in the 1990s.

“The army implemented a policy which was divulged and disseminated from the School of the Americas,” said Alejandro Parra, referring to false positives. “[It] is to measure troops’ strategic success from the number of deaths generated by combat operations… …It’s ridiculous because particularly in Colombia it meant the army killed more than 10,000 civilians to show them as ‘positives’ killed in combat.”

Parra is part of Acción colectiva de objetores y objetoras de conciencia (Collective Action of Conscientious Objectors, ACOOC), a Bogotá-based organization that advocates for the rights of conscientious objectors and demilitarization in Colombia.

General Mario Montoya, commander of the Colombian National Army from 2006 to 2008, served as a student and instructor at the School of the Americas. Montoya is implicated in the false positives scandal.

In February 2019, Human Rights Watch released a report documenting current army commanders who face allegations for their responsibility in false positives. General Evangelista, who implemented the Bogotá curfew during last year’s mass protests, and General Nicacio de Jesús Martínez, a former army commander, were both mentioned in the report. Jesús Martínez was briefly a student at SOA in 1981 and later worked with the CIA and SOUTHCOM while Evangelista was an instructor at SOA/WHINSEC 2001-2002.

“Far from being sanctioned, these officers who took courses in the School of the Americas and applied their doctrines of death… …were actually promoted and put in positions of military leadership and have been put in charge of directing high impact operations,” Parra said.

“The reason for the training in relation with drug trafficking isn’t very convincing,” said Abilio Peña, a member of Servicio Internacional Cristiano de Solidaridad con los pueblos de América Latina (International Christian Service of Solidarity with Latin American Peoples, SICSAL). “There are allegations and investigations against the president for the financing of his campaign by a drug trafficker. And there hasn’t been a statement by the US government on this.”

In February, three cocaine labs were found on family farms of Ambassador Fernando Sanclemente. Peña points out the U.S. government has also been quiet on the matter.

Peña is concerned that an invasion of Venezuela could be launched from Colombian territory, given the explicit position of the U.S. to remove Maduro from power. The arrival of U.S. troops is part of the Trump administration’s increased pressure on the Latin American “troika of tyranny”—Cuba, Nicaragua, and Venezuela.

“Some think they are going to invade Venezuela,” said Luzmery Panche, Indigenous Nasa and part of the Coordinación Nacional de Paz (National Coordination of Peace), charged with monitoring the ethnic chapter of the 2016 Peace Accords. “Or they could be coming here to take control of the Amazon and everything that would mean for the world.”

One of the “future zones” is in Chiribiquete in the Colombian Amazon. Luzmery says that in Chiribiquete, “there are oil concessions, hydro-electric dams, palm oil crops, and cattle ranching.”

Extractive industries are invested in the other “future zones,” including oil in Arauca, mining in Catatumbo, the mega-dam Hidroituango in Bajo Cauca, and gold and other mineral interests. Southern Córdoba has both mining projects and agroindustry.

There is precedent for using the military to protect extractive industries.

There is precedent for using the military to protect extractive industries. Drummond, AngloGold Asanti, and Glencore have all signed special protection agreements with the Colombian Defense Ministry, indicating private economic interests are appropriating public armed forces. Meanwhile, Colombia is the second most dangerous country in the world for human rights defenders whose work implicates companies.

In the United States, the War on Drugs justifies militarizing police forces and submitting Black and brown people to mass incarceration. In Colombia, militarized drug policy justifies dominating territories, intimidating adversaries, and assuring economic interests at the expense of people who were already living there.

It should come as no surprise that Colombians who joined worldwide protests of police violence and racism following the death of George Floyd also had U.S. militarism on their minds. Protestors outside the U.S. Embassy in Bogotá demanded the recently-arrived troops leave their country, and held a sign of solidarity with U.S. movements for racial justice. Their message linked movements in both countries: “Yankees out of Colombia, long live the struggle of the people of the United States.”

Tom Power is a candidate for a master’s degree in Estudios Políticos (Political Studies) in the Universidad Nacional de Colombia (Universidad Nacional of Colombia) and was an International Human Rights Accompanier with Fellowship of Reconciliation from 2016-2018, where he continues to collaborate.