Tech workers across pay scales, job types, geographies, and companies have joined together in unprecedented shows of solidarity. 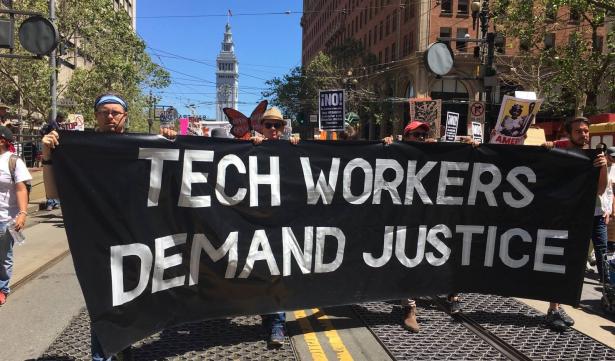 Employee activism at major tech companies like Amazon and Google has been on the rise, especially since the pandemic. ,

Google was one of the first.

Other companies took notice. Soon after, dozens of Kickstarter employees formed the first white-collar union at a major tech company.

Even a year ago, the idea that tech's cafeteria workers and office workers were on the same page about forming a labor union would have seemed unthinkable.

The recent wave of employee activism and organizing efforts represents a widening rift between the industry's rank-and-file employees and its executives. For the first time, developers and product managers with higher pay and closer ties to management are siding with their lower-paid colleagues in warehouses, cafeterias, and contract gigs.

A global pandemic and sweeping protests against systemic racism have brought workers across pay scales, job types, geographies, and companies together in an unprecedented show of solidarity. They've protested unsafe and toxic workplaces, racial and gender discrimination, and stagnating wages as tech companies rake in record profits. At the same time, workers who build the technologies shaping our society are demanding a say in how those products get built.

Business Insider spoke to more than a dozen tech employees, organizers, and labor experts who said the industry has reached an inflection point: Workers from the cubicle to the warehouse are, for the first time in a major way, united.

"What's different in this moment is that people see themselves as connected to, dependent on, and responsible for one another - software engineers and warehouse workers and delivery drivers, customers, neighbors," said Dania Rajendra, director of Athena, an organization of Amazon workers and activists.

Recent months have shown tech workers just how removed executives can be from the experiences of regular employees. The pandemic has wiped out millions of jobs since March, including cushy gigs at Uber, Lyft, and Airbnb. Meanwhile, Amazon CEO Jeff Bezos' personal fortune has grown by $35 billion this year, Facebook CEO Mark Zuckerberg's has jumped $30 billion, Tesla CEO Elon Musk is at least $2 billion wealthier, and Uber is busy buying up multibillion-dollar startups.

Labor leaders say the pandemic's impact on tech workers of all social classes, from software engineers to delivery drivers, has shifted often in opposition to management.

Take Amazon, where employees have sounded alarms since March about its coronavirus response and criticized its transparency around outbreaks at the company's fulfillment centers. After former warehouse worker Chris Smalls led a protest against what he called inadequate health and safety measures, Amazon fired Smalls and reportedly attempted to mount a racially charged smear campaign against him (Smalls is Black).

Amazon's reaction galvanized corporate employees within the Amazon Employees for Climate Justice group, which advocated and led virtual walkouts on behalf of their warehouse-based coworkers - a move that eventually resulted in the firing of two of its organizers, engineers based in Amazon's corporate headquarters. One of those employees, Maren Costa, who had been with Amazon for 15 years, told Business Insider at the time that she believed her firing was ordered by top executives and that the company has a history of pushing out whistleblowers. "Once you're in the crosshairs, you're out," she said.

Steve Smith, communications director for the California Labor Federation, said tech workers across class lines are particularly attuned to "broader societal ills, including income inequality and structural racism,"" and want to "change underlying, systemic problems that [have] allowed the system to become rigged against us."

As The Verge's Casey Newton noted earlier this month, employees are also increasingly seeing those systemic problems - from racially biased algorithms to hate speech moderation - as labor issues, and they're using every tool at their disposal to force changes.

Employees speaking out has led to changes at their companies, and encouraged other workers to do the same

Frequent leaks to the media - notable given the historically tight-knit culture at tech companies - and the emergence of groups like Rideshare Drivers United, Tech Workers Coalition, Athena, and Amazonians United are just two signs of the rise in employee activism in recent years. But over the past few months, emboldened by the pandemic and racial justice protests, workers at startups like Away and giants like Facebook have become a vocal chorus of critics.

"Tech has never been seen as a hotbed for worker-led organizing," Smith said. "That's changed in the last several years."

Part of the divide between tech workers and bosses can be attributed to company growth. Startups foster close relationships between early, white-collar hires and founders. Then, as more employees join, the buy-in to a company's mission can weaken. Buzzy luggage startup Away soared to unicorn status and hundreds of employees just five years after it launched, but many of them spoke out in recent months about a toxic culture fostered by outgoing co-CEO Steph Korey. Korey's behavior was largely defended by early employees, other executives, and investors.

Some employees have also felt more comfortable, and found success, in opposing executives over the products the company builds. Google said it would stop building drone imaging software for the US Department of Defense after employee activism, and Amazon said it would pause selling facial recognition technology to law enforcement in June.

Facebook employees, contractors, and researchers funded by CEO Mark Zuckerberg recently spoke out against the company's hate speech and moderation policies; in one instance, a Facebook engineer resigned over the company's decisions. The issue has become a growing headache for Facebook, which just faced its first civil rights audit.

"Despite the obvious differences of average salaries and physical workspaces, the core issues that bring workers together remain the same: collective bargaining rights, development of democratic workplace policies, and job protection, among others," said Grace Reckers, an organizer who helped form the Kickstarter union.

Laurence Berland, an engineer fired by Google last fall after speaking at a protest where employees accused the company of union busting, said he had seen solidarity across different roles and social classes at the company. In the past two years, 17,000 Googlers walked out over sexual misconduct. In March, full-timers demanded that Google do a better job of protecting contractors from COVID-19.

Berland said Googlers have also been "actively supportive" of unionizing efforts by the company's contractors, who are often paid less despite outnumbering its full-time workforce. Ben Gwin, who started the organizing efforts at HCL, said that solidarity proved vital for the union push there. HCL could have just fired the organizers and avoided the whole thing, even if it meant a slap on the wrist from regulators, he said, but "a big reason that they didn't was because we had so much support from the full-time Google employees."

Y-Vonne Hutchinson, who co-founded Black Tech for Black Lives, a collective of Black tech workers and entrepreneurs, said that for the first time, workers are "pushing organizations to go from just tweeting about [racial equality] or coming out with a statement to really saying what they're going to do to make a change."

The biggest takeaway from this recent spree of collective actions might be that, in at least some cases, they're working. Uber reversed course on its sick pay policy after drivers slammed it. Amazon announced it would pay $500 million in one-time bonuses to front-line workers after they criticized its decision to end a temporary $2 hourly pay bump during the pandemic. Last year, Instacart abandoned a controversial new pay structure when shoppers said their pay dropped significantly.

And as companies unleash massive layoffs during the pandemic, tech workers have caught a brief glimpse of what their world might look like if they had more power. Kickstarter said in May that it would cut 39% of its workforce, but thanks to a deal reached between Kickstarter and its union, laid-off employees received four months' pay, four to six months of healthcare coverage, and first dibs on their old job if Kickstarter brings it back within a year.

Contrast that with thousands of startup employees who experienced blunt, Zoom-delivered break-ups with no severance packages, and suddenly, a union looks pretty appealing. That said, the path for tech unions is still full of pitfalls, and huge changes to US labor law and the social safety net would be needed to reverse the decades-long effects of stagnated workers' wages and rolled back rights.

So, employees will continue to put pressure on executives and the companies they run.

"I don't see a near future where workers are just going to roll over and just accept what's going on," Smalls, the ex-Amazon organizer, said.