How Athletes Protesting the National Anthem Has Evolved Over 17 Years

When Toni Smith-Thompson turned away from the flag in 2003, the act was widely derided – a far cry from how similar gestures by NBA and WNBA players are received today. 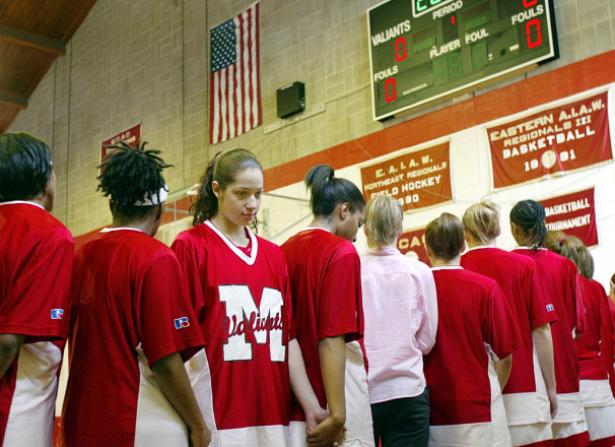 Manhattanville College guard Toni Smith, third from left, turns her back on the American flag during the playing of the national anthem before a basketball game against Stevens Tech on Feb. 23, 2003, at Manhattanville College in Purchase, New York., AP Photo/Stuart Ramson // The Orange County Register

The Associated Press report described a Vietnam war veteran stepping onto the basketball court during a Division III women’s college game and thrusting an American flag toward the 21-year-old forward who’d turned away from it during the national anthem that night, as she had before every game that season.

“She disgraced herself and she disgraced the flag,” Jerry Kiley, 56, was quoted as saying then.

Seventeen years later, the Lakers, Clippers and a vast majority of their NBA colleagues are kneeling during the anthem before every game at Walt Disney World Resort. And in another Florida bubble about 100 miles away, the Sparks and other WNBA teams are leaving the court before “The Star-Spangled Banner” plays in virtually empty gyms.

President Donald Trump expressed his displeasure – “I think it’s disgraceful,” he said – but overall, when it comes to politics and sports, public opinion has shifted since 2003, when an otherwise unknown Manhattanville College player’s 90-degree turn resulted in jeers and death threats and spurred national debate.

Much of the argument then mirrored popular columnist Mitch Albom’s insistence that Toni Smith-Thompson was wrong “because a college basketball game is not a political arena, nor a stage for protest.”

But as of October, a Pew poll indicated that 62% of Americans find it acceptable for professional athletes to speak out publicly about politics, including 74% of those between 18 and 29 years old.

“I’m very glad that we have moved past the point of debating whether or not there’s a place for politics in sports,” said Smith-Thompson by phone from New York, where she’s a senior organizer with the New York Civil Liberties Union. “There are some people who are still against these expressions of social justice, but by and large, we are past the moment where people are saying politics shouldn’t be in sports, because they are. They’re in sports.

“So now the conversation is about how politics are going to be in sports.”

Basketball at the forefront

During the ongoing national reckoning about race, professional basketball has not shied away from that conversation.

There have been big-ticket pledges like the one from the NBA Foundation – an initiative launched recently by the NBA Board of Governors and the NBA Players Association – promising to contribute $30 million annually for a decade with the goal of “creating economic empowerment in the Black community.”

There’s been news of prominent action plans, like LeBron James’ new voting-rights group, More Than a Vote, partnering with the Dodgers to turn Dodger Stadium into a polling place in November.

Players and coaches have steered interviews toward social justice issues, exemplified by Dallas coach Rick Carlisle and Memphis coach Taylor Jenkins, who deliver history lessons about the country’s struggles with racism at the top of virtual scrums with reporters. Jenkins has directed his audience toward calendar.eji.org, a digital this-day-in-history initiative from the Equal Justice Initiative, with which the National Basketball Coaches Assn. has partnered.

There’s the continuing anthem protests, and other can’t-miss symbolism: Black Lives Matter is displayed in bold lettering on NBA and WNBA courts, and socially relevant messages appear on the backs of most players running up and down them.

From a menu agreed upon by the NBA and NBPA, players had their pick of messaging to adorn on the backs of their jerseys, if they chose – phrases such as “Black Lives Matter,” “Education Reform,” “I Am A Man” and, above Lou Williams’ No. 23, “Equality”.

“I’m happy to know that I work for a company that stands alongside of the minorities in this country and wants to make a bold statement like that,” the Clippers guard said. “Obviously, they have a lot of sponsors … and some people may not feel that way. It was important for the NBA to listen to the players and listen to our voices and put the things in motion that we felt strongly about.”

In the WNBA, players agreed they all would wear the name of Breonna Taylor, the Black EMT fatally shot in her apartment when Louisville Metro Police Department officers executed a no-knock search warrant in March.

“We’re still trying to fight for justice for her,” said the Sparks’ Tierra Ruffin-Pratt, one of the members of the league’s newly formed Social Justice Council. “Even though we’re not out there on the front lines, we’re still trying to make some noise here in the bubble.”

Smith-Thompson is watching all of this with keen interest, ruminating on what this moment might mean, long-term, in the fight for racial justice, and reflecting on her experience and what’s changed in 17 years. That includes the blowback Colin Kaepernick received for kneeling during the anthem four years ago, and that the upswell of support he received came from student-athletes before his professional peers.

Now, WNBA players are getting it right, Smith-Thompson thinks, noting the effectiveness of their “Vote Warnock” T-shirts.

After a pair of Zoom conferences with the Rev. Raphael Warnock, players wore T-shirts expressing support for his U.S. Senate campaign against Atlanta Dream co-owner Sen. Kelly Loeffler (R-Ga.), a staunch conservative who wrote to WNBA Commissioner Cathy Engelbert before the season objecting to the league’s embracing Black Lives Matter and suggesting that teams instead add the American flag to jerseys.

That sentiment received swift reproach from players. They responded by wearing T-shirts supporting Warnock, whose campaign reported raising almost $240,000 and adding 4,000 new donors in the three days that followed.

“When I saw that, my thought was, ‘This is brilliant,’” Smith-Thompson said. “They are doing something simple and visible, they are emphasizing the importance of local elections, they’re keeping the focus on issues, they’re challenging power. And they are continuing to evolve their tactics … It was totally about challenging the power, but it also wasn’t centering her, which I loved.”

The women in the league are intentional about trying to harness their collective power, said New York Liberty guard Layshia Clarendon, a San Bernardino native who’s become one of the league’s leading voices for social justice.

“Coming into the season, it was about the 144, whatever we do is stronger if the whole league did it,” she said by phone. “We’re smart enough and well organized enough to realize that. LeBron can sneeze and people care more about that, because of sex (discrimination) and the way we’re covered, so for us, it’s about doing it together.”

That’s something that Smith-Thompson said she wishes she’d considered in 2003, when her solitary, personal protest made her a national lightning rod. She heard from supporters, she said, but her detractors included major college coaches, pundits, sports columnists – and strangers who went through lengths far greater than firing off a tweet to find her address and mail her newspaper clippings scrawled with obscenities or wishes that she “die by this very specific, particular way.”

Her protest, which came on the brink of the U.S. invasion of Iraq, wasn’t meant to make news, Smith-Thompson said.

“It was very much personal,” she said. “It was rooted in a disgust that the racial injustices that are rooted in our domestic policy were then extended to our international policy … if you’re gonna say that the flag stands for freedom, you also have to say it says stands for the massacre of indigenous people, enslavement of African people, you need to hold all of it. So my protest wasn’t really a demand that the country not be racist, although certainly we want that, that particular protest was me saying, ‘You’re not gonna make me participate in it.’”

But those conversations weren’t happening among basketball teammates then, not as they are now.

“I just feel like today’s movement is so much more arrived, and it’s really kind of wonderful to see it, and at the same time, once in a while I’m like, ‘Maybe I should have thought to do that,’” she said. “It didn’t even cross my mind when I protested that the protest could be a collective protest. It was so far from my realm of what was likely or possible, to say to a teammate, ‘Do this with me, and here’s why.’

Clippers coach Doc Rivers, who’s coached in the NBA for 21 seasons and played 13 before that, said it feels to him as though this current moment – with its collective might – could have staying power.

“It’s always hot times, there are certain times when I was a player where something happened that the conversation came up, and then it usually faded away,” he said. “I think this one is here to stay, hopefully. There’s so many more players involved now than ever before. There’s so many of our young players speaking out, taking leadership roles.

“What gives me a lot of hope is that it is the players. Us coaches are always involved for the most part, and we’re doing our thing, trying to educate our guys as much as possible. But I think what’s been more impressive in this one is how willing the players, not only want to get involved, but they want to lead.”

[Mirjam Swanson covers the Clippers, the NBA and the LA Sparks for the Southern California News Group. Previously, she wrote about LeBron James and the rest of the Dream Team at the 2004 Olympics (where, yes, they took bronze), Tiger Woods winning the U.S. Open on one leg, and had a tour reporting on city government, education and the occasional bear in a backyard.]