food In the middle of two pandemics, cooking soul food has become my labor of love

I continue to seek healing in the kitchen, the way I recover from the churning news cycle of sickness and police violence. 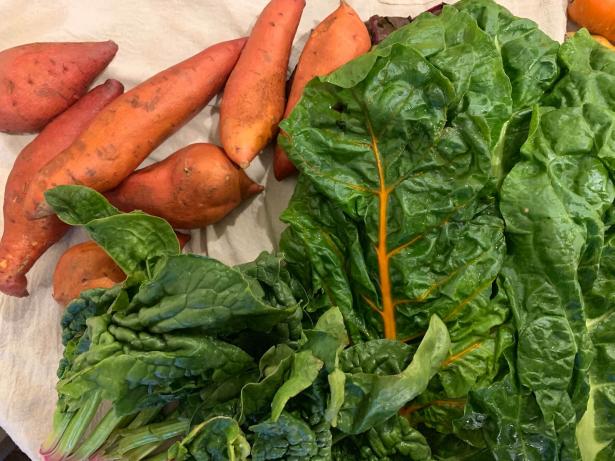 A cuisine that now brings us comfort was born out of creative struggle and a determination to survive., Talia Moore

In late March, as my days indoors began to accumulate, I started seeking comfort in the kitchen. I was still grieving the loss of my cousin, who committed suicide last fall, and since I was unable to mourn with my family physically, food became the bridge between our distance and my memory of him.

More than anything, I found myself craving soul food. At first, this was simply a question of appetite, my body telling itself what it wanted. I ate collard greens and rainbow chard. I ordered fried catfish from a local spot in Bed Stuy, Brooklyn, a reminder of the family fishing trips and fish fries that were a highlight of my childhood. I insisted on figuring out every way I could prepare a sweet potato. I even made two pans of mac n’ cheese, way too much for me to eat alone, in tribute to my cousin—who would always take the biggest plate home after family functions.

A cuisine that now brings us comfort was born out of creative struggle and a determination to survive.

My desire for soul food led me to reflect more consciously on its origins. It was a reality check of both privilege and grief. When I think of the legacy of soul food, I think of the wisdom of Black women who braided okra seeds and black-eyed peas into their hair, bringing with them the food histories of their people. The innovation required to make rough greens edible. The creative genius needed to invent hush puppies from corn meal and cooking oil. Generations of Black folks before me endured far worse than I had, cooking from the comfort of my Brooklyn apartment.

Then, slowly, the reality of the pandemic as I experienced it started to shift. The destabilizing fear of sickness became a broader reckoning with the forces of systemic injustice—the fact that being Black in America can cost you your life. Shortly before I started sheltering in place, Breonna Taylor was murdered by the Louisville Metro Police inside her apartment. Ahmaud Arbery, an unarmed Black man, was shot to death while jogging in his Glynn County, Georgia neighborhood. Tony McDade, a Black trans man, was killed by the Tallahassee Police Department, two days after the public lynching of George Floyd in Minneapolis. The list goes on of Black lives, those named and unnamed, stolen by police violence and racist terror.

A box of dry beans sent by care package to the author from her family.

As Americans across the country took to the streets to protest, part of me wondered whether the comfort I had started to find in eating was out of touch.

And yet food—soul food—continued to be the way I sought healing, a way to recover from the churning news cycle of police brutality and murder. After attending an altar ceremony for victims killed by police, I submerged greens in a bowl of cold water, a soothing and cleansing practice I had been taught from a very young age.

I longed for my grandmother’s vinegar pie, an adaptation to apple pie, formed in response to a lack of access to fruit during the Dust Bowl. Dumplings made of dough replaced fruit fillings, folded into the sweet and tangy syrup.

I even came to think differently about meals I dreaded growing up—simple staples like beans and rice that made my face scrunch up as a kid. For my birthday last month, my parents shipped me a box of dried food and I was pleased to find it was full of beans. Now the beans I make from scratch are a source of pride and pleasure.

In the months after my cousin died, I found myself eating for sustenance, or barely eating at all. But my desire for nostalgia, to revel in tastes connected to my family’s lineage, increases daily. I began to accept that I shouldn’t feel guilty about turning to food for respite during this time. That’s part of the legacy of soul food, too: A cuisine that now brings us comfort was born out of creative struggle and a determination to survive.

Grief is heavily tied to food. And in a reality where two pandemics are killing Black people at disproportionate rates—the ongoing public health crisis that reflects our society’s systemic injustice, and the ongoing epidemic of police violence—cooking has become my labor of love. It’s a way for me to be kind and gentle to myself and others, a reminder that I’m alive and still fighting. My hours in the kitchen have become a cathartic practice, a difficult chapter’s saving grace.

Talia Moore is The Counter’s editorial producer. Her previous work has highlighted the intersections of food sovereignty, art, and culture, while centering the marginalized voices of QTPOC, women, people of color, and immigrant communities.