Letter from Bernie on the 'Danger of Socialism'

But he sees already existing socialism for the rich as the problem. 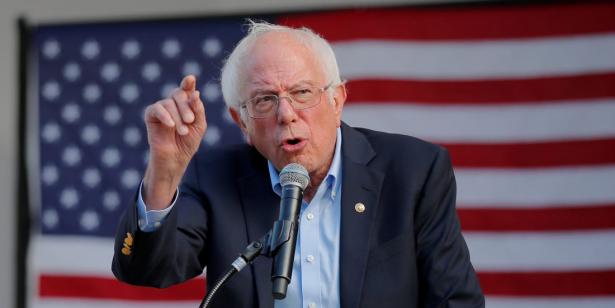 If you have watched the first two nights of the Republican National Convention, and I am sorry if you have, you have probably seen speaker after speaker accuse Joe Biden and the Democratic Party of being SOCIALISTS who, if elected, will carry out the agenda of Bernie Sanders, Alexandria Ocasio-Cortez, and Ilhan Omar.

If only that were true…

But while they scream "socialist" as an epithet in their videos and from the stage, what everyone needs to know is that Trump and the Republican Party just LOVE socialism — a corporate socialism for the rich and the powerful.

And let's be clear. Their brand of socialism has resulted in more income and wealth inequality than at any time since the 1920s, with three multi-billionaires now owning more wealth than the bottom half of our nation. Their socialism has allowed, during this pandemic, the very, very rich to become much richer while tens of millions of workers have lost their jobs, their health care and face eviction.

While Trump denounces socialism let us never forget the $885 million in government subsidies and tax breaks the Trump family received for a real estate empire built on racial discrimination.

But Trump is not alone.

And who could ever forget when Larry was on television begging for the largest federal bailout in American history for his friends on Wall Street — some $700 billion from the Treasury and trillions in support from the Federal Reserve — after their greed, recklessness and illegal behavior created the worst financial disaster since the Great Depression.

But it is not just Trump and Larry Kudlow.

If you are a fossil fuel company, whose carbon emissions are destroying the planet, you get billions in government subsidies including special tax breaks, royalty relief, funding for research and development and numerous tax loopholes.

If you are a pharmaceutical company, you make huge profits on patent rights for medicines that were developed with taxpayer-funded research.

If you are a monopoly like Amazon, owned by the wealthiest person in America, you get hundreds of millions of dollars in economic incentives from taxpayers to build warehouses and you end up paying not one penny in federal income taxes.

If you are the Walton family, the wealthiest family in America, you get massive government subsidies because your low-wage workers are forced to rely on food stamps, Medicaid and public housing in order to survive — all paid for by taxpayers.

This is what Dr. Martin Luther King, Jr. meant when he said that “This country has socialism for the rich, and rugged individualism for the poor.”

And that is the difference between Donald Trump and us.

Trump believes in corporate socialism for the rich and powerful.

We believe in a democratic socialism that works for the working families of this country. We believe that in the wealthiest country in the history of the world, economic rights are human rights.

So yes, progressives and even moderate Democrats will face attacks from people who attempt to use the word "socialism" as a slur.

There is nothing new of that.

Our job in this moment is to stay focused.

Then on Day 1 of the Biden administration, we will mobilize the working families of this country to demand a government that represents all of us and not just the few. We will fight to ensure that every American has a right to a decent job that pays a living wage, to health care, to a complete education, to affordable housing, to a clean environment, and to a secure retirement — and no more tax breaks for billionaires and large corporations.

Add your name to say you’re in this fight:

Sign my petition: add your name to say you’ll fight for a 21st Century Bill of Rights that guarantees everyone in this country a decent job with a living wage, quality health care, a complete education, affordable housing, a clean environment, and a secure retirement.