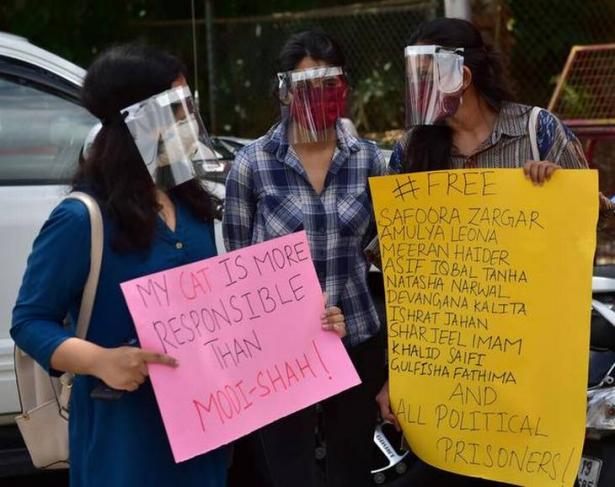 At Mourya circle in Bengaluru, India, a protest against the arrests of anti-CAA activists,Photo: V. Sreenivasa Murthy

Walking out in their thousands, employees at industrial behemoths carried signs saying, “We’re Not Serfs — We’re Workers!” with some even calling for a general strike.

Russian Socialist Movement: “No to Putin’s police operation against the Belarusian people!”

Communist Party of the Russian Federation: “Belarus is not ruled by his majesty the dollar.” (Scroll down to “Union of Communist Parties”)

Left Front: “Brothers Belarusians, do not be fooled!”

The Left Front is watching with great concern the development of events in fraternal Belarus, where a very difficult situation has developed, and civil confrontation is growing, fueled by various imperialist forces.

Of course, we must record that President Alexander Lukashenko played a huge positive role in preserving and developing the sovereignty of Belarus, preventing the predatory privatization of natural resources, industry and the ruin of agriculture, protecting the social rights of the population. However, at the same time, one cannot but admit that he was unable to timely implement the principle of the change of power, therefore, in recent years, he increasingly resorted to anti-democratic, authoritarian methods of leading the republic. This gradually led to the formation in the Belarusian society of a fairly massive segment of opponents of Lukashenka’s policy, who became more active following the results of the presidential elections held in Belarus on August 9 this year.

We understand the emotions of Lukashenka’s opponents, who are outraged by the non-transparent format of the last vote, as well as the excessively harsh suppression of protest actions after the elections. But at the same time, it should be noted that the leaders of the opposition in their program offer the Belarusian people stereotyped neoliberal dogmas in the spirit of Gaidar-Chubais, the implementation of which will inevitably lead to increased exploitation of the working class, degradation of the republic's industrial potential and the elimination of many social gains of modern Belarus. At the same time, the Belarusian opposition is actively supported by aggressive representatives of large Western and Russian capital, who expect to profit from the wealth of the republic in the event of Lukashenka’s fall.

In such a situation, we call on the Belarusian brothers to show wisdom, not to bring the country to civil war and bloodshed, not to give Belarus to be torn apart by the imperialist bastards, but to organize a full-fledged dialogue between the conflicting parties in order to find a constructive way out of the situation by carrying out the necessary reforms aimed at democratizing the political situation in the republic and further improvement of the life of the working people. This applies to both the Belarusian authorities and the protesters.

Brothers Belarusians! Do not fall for provocations, be the masters of your own destiny. Form people’s councils at various levels, develop independent trade unions, and intensify the activities of left-wing political parties and movements. Do not give your homeland into the hands of shameless predators who are now skillfully using your emotions.

Know that the people of Russia are sincerely worried about your fate and hope for the further development of allied relations. Our brotherhood must last forever!

We have guided our political tactics into three priorities: active resistance in defense of the conquered territories; Emergency Plan for People’s Agrarian Reform with measures to face the pandemic and economic crisis; and class solidarity.

Diversity, the history of slavery in Morocco, and the racism that is generally inherent in post-slave societies are not openly discussed and often denied by non-Blacks.

Agitators for a rent strike in the renters union had to moderate their positions as, via phonebanking and an online survey, they went through the process of speaking to struggling members.

Protests have broken out in many cities against alleged misappropriation of funds for COVID-19 equipment.

Interrogations, arrests and charge-sheeting of anti-CAA protesters continue. More and more people feel that the inquiry is a ruse for political vendetta against Muslims and critics of the BJP government.

In the second round of the recent municipal elections, we witnessed the possibility of a new kind of democratic, ecological civic alternative beginning.