“It is beyond me how Mike Pence can come to speak in northeastern Pennsylvania when this administration has attacked workers’ rights,” Warren Faust, president of the NEPA Building and Construction Trades Council, said early Tuesday afternoon. 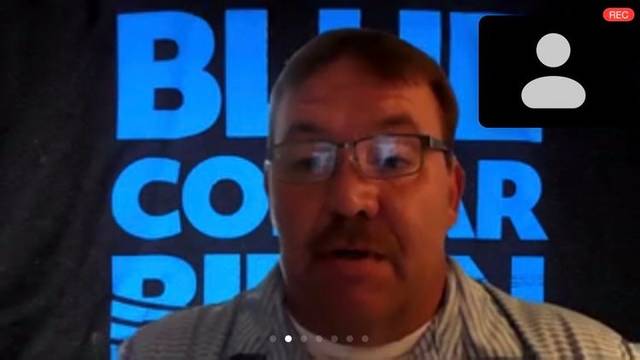 Warren Faust, president of the NEPA Building and Construction Trades Council, speaks during a virtual press conference Tuesday afternoon prior to Vice President Mike Pence’s appearance in Exeter. ‘It is beyond me how Mike Pence can come to speak in northeastern Pennsylvania when this administration has attacked workers rights,’ Faust said.

As supporters lined up for shuttle buses to hear Vice President Mike Pence speak at a “Workers for Trump” event in Exeter later Tuesday, a key local union leader was left scratching his head.

“It is beyond me how Mike Pence can come to speak in northeastern Pennsylvania when this administration has attacked workers’ rights,” Warren Faust, president of the NEPA Building and Construction Trades Council, said early Tuesday afternoon.

During Donald Trump’s presidency, Faust said, the National Labor Relations Board has “systematically rolled back” workers’ rights and the right to engage in collective bargaining, pursuing policies he says leave fewer workers protected by that body and reducing the protections offered to those who are still covered.

And it’s not just NLRB: Other agencies, such as the Occupational Safety and Health Administration, also have seen their regulatory powers diminished, Faust added.

Such attacks have only ramped up as the nation has been preoccupied with COVID-19 and its economic fallout, he said during a virtual press conference by area Democrats held early Tuesday afternoon, well before Pence was set to touch down for his 4:30 speech at Kuharchik Construction.

“Perhaps, as November gets closer, candidates will start to talk about how a president who claims to be for working people has gutted workers rights,” Faust said, calling Democratic challenger and Scranton native Joe Biden “the real blue collar candidate.”

The Biden campaign released its own statement earlier Tuesday.

While each said they awaited Pence’s remarks, each also expressed incredulity that the Republican veep would come to rally workers in our region at a time when so many workers here and across the country are jobless — as a result, the Democrats said, of Trump’s policies and handling of the coronavirus outbreak.

“Most families in our region … and the state, are concerned about two basic crises: The virus and jobs,” casey said, citing 886,000 people out of work across Pennsylvania and about 39,000 between Luzerne and Lackawanna counties.

“The evidence is mounting by the hour and by the day of their failure to adequately deal with this virus and their failure to have an economic plan in the aftermath,” Casey said. “Biden and (Kamala) Harris have a plan for both.”

That plan, Casey explained, is the “Build Back Better” strategy, as outlined by Biden in recent speeches and on his website. It has four points designed to capitalize on American manufacturing capabilities, investing in infrastructure, building a “caregiving and education” workforce and promoting in racial equity by investing in minority communities and entrepreneurs.

“I’m willing to bet we’re not going to hear much about an economic plan from the people (currently) running the federal government,” Casey predicted of Pence and the GOP.

Blake pointed out that the U.S. manufacturing sector had slipped into a recession in 2019, well before the COVID-19 pandemic struck in March of this year, and that other sectors, such as agriculture and lumber, were already suffering due to Trump’s “failed trade war” with China.