labor All Aboard to Defeat Trump: Biden Train Tour in Pennsylvania Steel Country

The “Build Back Better Tour” by Joe Biden originated in Cleveland and made a campaign stop in Alliance, Ohio. Riding into Pennsylvania, Biden made stops in Pittsburgh, Greensburg, New Alexandria, Latrobe, and concluded here in Johnstown. 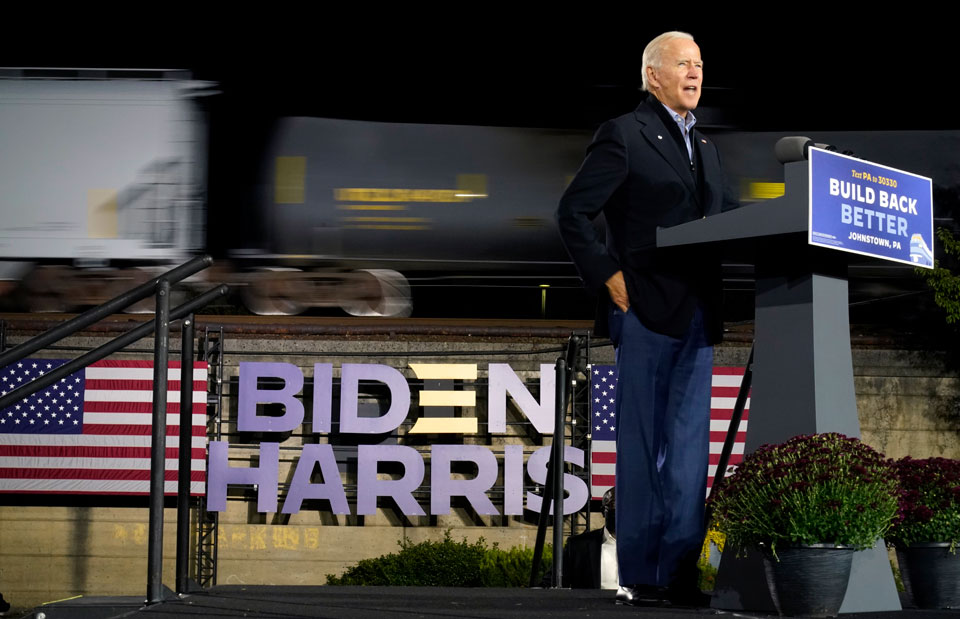 JOHNSTOWN, Penn.— It was an unusually warm autumn evening in Johnstown as Joe Biden’s Amtrak pulled into the city’s historic passenger station, opened in 1916. The station is a unique structure, as trains arrive above the depot on an elevated level. The adjacent wall was adorned with a massive Biden-Harris sign, rising above a very enthusiastic crowd.

This was a drive-in style outside event in Johnstown, with social distancing. It would be highly unlikely for Donald Trump to campaign by rail, as he has continually ignored and sought to defund Amtrak. On the contrary, Biden says he knows how essential passenger train service is, connecting communities like Johnstown, and supports Amtrak faithfully.

It’s common knowledge that “Amtrak Joe” loves trains. He hit the campaign trail on rails Sept. 30 after taking on Trump in the first debate—and before the president’s COVID-19 diagnosis.

The whistle stop campaigning brought to mind the nostalgic tradition of candidates riding the rails through America. On the heels of the debate, for many voters, the arrival of the Biden train seemed the equivalent of comfort food, a signal of Biden’s claim he’d restore decency and accountability in the White House.

The “Build Back Better Tour” originated in Cleveland and made a campaign stop in Alliance, Ohio. Riding into Pennsylvania, Biden made stops in Pittsburgh, Greensburg, New Alexandria, Latrobe, and concluded here in Johnstown. In-person campaigning has been limited during this year of the pandemic. At the whistle stops, attendees were properly spaced out with social distancing and masks.

The involvement by labor unions in the Biden campaign has been strong; AFSCME, USW, and SEIU were just a few unions represented at the Johnstown rally. Local resident Brian Smith, former Navy Seabee and current SEIU member, shared how a good union job enabled his family to remain in Johnstown, before introducing the Democratic candidate.

Biden arrived on stage, to much applause, shouting, “Hello Johnstown!” As he began addressing the crowd, a loud freight train roared past. Turning around and pointing to the train, Biden said, “By the way, that’s a good thing!” Reflecting, he reminded the crowd of his long connection to the nation’s rail system. “I started by taking the train when I got elected as a 29-year-old kid in the United States Senate. I started going back and forth every single day so I could be home in Wilmington every night with my two young boys, and later, with my daughter.”

He talked about riding the train home at night after a debate in the Senate “about fair tax policy, or about health care, or about unions that I was fighting for…and I’d look out…I really mean this…I’d look out like I did coming from Cleveland today. I’d look out at all those homes I’d pass, those middle-class neighborhoods like I was raised in.”

Biden said the view made him wonder whether the families inside were “having the same conversations my mom and dad had when we were growing up…we need four new tires on the car, but we can’t afford it…or maybe we are going to have to worry about whether or not they’re going to turn the electricity off because we’re behind on the bill because the job changed or I lost my health insurance.”

In the midst of the ongoing pandemic and economic collapse, Biden said people today are having the same kind of conversations.

Johnstown was once a thriving steel manufacturing town located in Cambria County, Penn. While a few mills remain, some retaining a unionized workforce, a majority have closed. The city continues to struggle, as it is statistically one of the poorest places in Pennsylvania.

Once a Democratic stronghold, the county’s party affiliation numbers recently revealed that registered Republicans now slightly outnumber Democrats for the first time for as long as local residents can remember. This has been the trend throughout Western Pennsylvania.

In 2016, Trump held a rally in Johnstown and many voters here supported him then. Biden is intent on gaining those supporters back, and the labor movement here is determined to pull people away from Trump.

There is evidence they may succeed with some. When Trump passed through four years ago, he took people’s votes, but then gave nothing back. While fueling division across the nation, he plainly forgot about places like Johnstown. There is a sense here that local citizens are now realizing this.

Due to strict social distancing, Biden’s rally could only accommodate a limited number of attendees. Nonetheless, across the Little Conemaugh River from the train station, many local supporters arrived to glimpse the stage and express their solidarity.

A local pub, adhering to strict health guidelines, provided an outdoor television screen to broadcast the speech. In an encouraging sign, supporters also arrived from surrounding rural areas. An important factor concerning the election outcome in Pennsylvania will be the urban-rural divide, which the Biden campaign seems well aware of.

Johnstown was once home to a thriving steel industry. Here, a woman walks past the Gautier steel buildings in town. Trump’s promise to revive the industry came up flat, and voters have not forgotten. | Carolyn Kaster / AP

Speaking before the candidate, Jill Biden hit on the point. “We’re seeing that our differences are precious and that our similarities are infinite. Democrat and Republican. Urban and rural. Our communities are showing that the heart of this nation still beats with kindness and courage.” Pushing the crowd to look beyond the harshness and division of Trump’s presidency, she argued, “We don’t agree on everything. And we know we don’t have to. We can still love and respect each other. We care more about people than politics.”

Concluding his address, Biden again called out to labor, proclaiming “the middle class built America and unions built the middle class.” He vowed a presidency that would fight for working people and their jobs and families, “not for corporations.” To the residents of this town that’s been feeling hard economic times for years, he pledged to “build back better” after Trump. “It’s all about injecting life and capital back into places like Johnstown.”

Many registered voters in small Western Pennsylvania towns have a deep-rooted history of leaning conservative regarding social issues. This has been a factor in the realigning of the region politically, creating a challenge for uniting voters.

Biden knows this well, and his whistle stop campaigning through what the media calls the “Rust Belt” shows his campaign is reaching out in an effort to bring everyone back on board to defeat Trump.