The End of the Voter-Consumer

The work of organizing a politically legible coalition of nonvoters is functionally the same as what’s needed for the left to win elections. 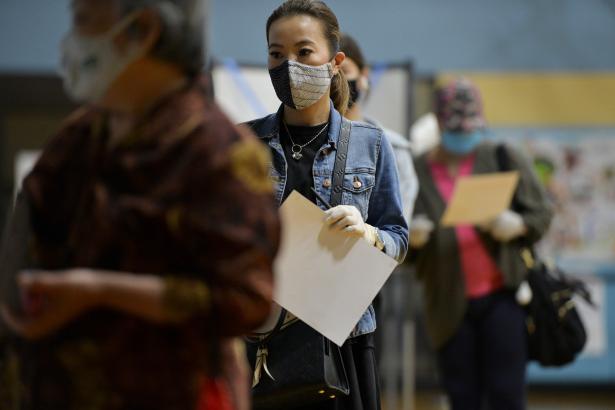 With the conventions behind us, it’s clear that Republicans are running full speed ahead on consolidating our country’s lurch toward fascism, stoking fears of leftist-driven mass chaos engulfing American cities, and valorizing the armed guardians of property, both police and civilian. Democrats, for their part, seem committed to 2016’s failed playbook to appeal to affluent white suburban Republicans and offer vanishingly little in the way of a policy vision capable of addressing a pandemic and a devastating recession.

For those of us whose political mission is to overpower corporate interests and build a world that prioritizes human life over the violent demands of capital, the coming months will be a familiar season of brutal fear and anxiety. As always, we’re faced with the same question: What the hell do we do come November? Should we “reward” the Democrats with our votes despite their unflinching alignment with the donor class? Stay home? Vote for a marginal party or write in our displeasure with a noncandidate?

But these are false choices mirroring the mainstream liberal framework for voting. It’s a consumer model of politics that presents elections as singular opportunities for us to make our individual voice heard—one person, one vote—and misses something crucial about the left’s project: building power through the strength of the collective. Vote or don’t—really, it’s your choice. But personal feelings aren’t the same thing as political positions; a moment of individual self-expression isn’t political action. If it’s not part of a collective effort, it pretty much doesn’t count.

Against the backdrop of thousands still dying and millions still unemployed because of a pandemic response that has rejected political planning and collective solutions in favor of individual “personal responsibility,” the left must insist that, far from a personal act that expresses the hot feelings of one’s heart, voting is instead a stone-cold political tactic for achieving defined aims in a collectively waged struggle.

It’s easy to imagine tactical deployments of mass, organized threats of vote-withholding. How many people in Pennsylvania, Wisconsin, and Michigan would need to publicly pledge to sit out the election together unless Biden endorsed Medicare for All and a Green New Deal, before extracting some concessions? Trump’s 2016 margin of victory in those states was a combined 80,000 votes, and there were nearly three times that many Bernie Sanders voters in Pennsylvania alone, which held its primary months after he dropped out of the race.

How can someone withholding a vote as a self-purifying act be distinguished from someone unable to vote because of work, health care–based obstacles, lack of transit, vote suppression, or alienated resignation? Nobody pays attention to individual nonvoters—that’s part of the problem—so nobody is in a position to be taught a lesson by anyone’s nonvote. On top of that, Democrats have shown themselves to be more or less immune to learning lessons from lost elections. They do it all the time and go back for seconds.

But we don’t need to think through hypothetical campaigns about making a nonvote politically meaningful; we can simply look to those who really are waging collective struggles to see how they are trying to use the election to extract concessions from the Biden campaign or use it to build their coalition.

The Sunrise Movement, which supported Sanders in the primary, has launched an ambitious mass relational-organizing program at dozens of colleges, high schools, and middle schools throughout the country, collecting pledges to vote against Trump as a first point of contact for potential recruits as they build chapters with an eye toward staging powerful actions in 2021. (Disclosure: I am a volunteer coach.)

“What we’ve shown is that when we organize, we can change the terrain of possible, and the common sense of society,” the organization wrote in a statement on the progressive changes its director, Varshini Prakash, helped make to Biden’s climate platform as a member of the Biden-Sanders “unity task force.” “But millions are without jobs. Storms are battering our coasts as we speak. The summer is getting hot. Babies are being born into an increasingly uncertain world. Folks can’t breathe. So roll up your sleeves, and let’s keep pushing.”

Likewise, the Latinx movement organization Mijente, which similarly endorsed Sanders in the primary while also agitating to move his platform left when he fell short, is stepping into the election with an effort called #FUERATRUMP, which casts electing Biden as a critical harm-reduction campaign in advancing its long-term strategy. “We only get one chance to end Trump’s presidency, alleviate the harm on our gente, and clear the way to organize for change,” it wrote. Mijente knows Biden is not a champion for its agenda, having repeatedly interrupted and denounced him during the primary campaign, but in no way are its long-term objectives advanced by staying out of the electoral arena.

Among Sanders’s labor movement endorsers, perhaps none is so embattled as the American Postal Workers Union. For decades, it has been fending off bipartisan-led attacks on the postal service, and knows electing Biden is no guarantee that the onslaught will relent. But it is clear that stepping out of the electoral sphere as a terrain of struggle is a guarantee it won’t. There is “a stark choice,” it wrote in its statement endorsing Biden. Beyond that, “Our union will continue to help build the movement to defend the Postal Service and win a more just society.”

These groups, who will, unlike the Democratic Party, continue fighting after November 3, understand that confiscating fascists’ public offices feeds the aims of all people’s movements. They are clear that there is no question which of the two possible presidential administrations opens the widest pathway forward for our transformative agenda.

It’s easy to feel spurned—or rightly disgusted—by a party hell-bent on high-dollar fundraisers with tech and finance barons, which invited the unrepentant anti-union, anti-abortion Tea Party Republican John Kasich as a primetime convention speaker while sidelining its own future in lawmakers like Alexandria Ocasio Cortez. It makes sense to resent being vote-shamed by people who have never taken to the streets, never joined a picket line, never committed civil disobedience—who have never risked anything for political struggle. And it is difficult to stomach a candidate whose reputation for compassion and decency is plainly belied by decades of footage showing his aggressive arrogance, serial dishonesty, and handsy ghoulishness.

We should also be clear about the limits to our ability to move the Democrats left, which become clear when looking back at the Obama years, when righteous movements from Occupy Wall Street to Black Lives Matter and Indigenous-led climate justice activists extracted little more than lip service from a president elected in large part on his progressive bona fides as an opponent of the Iraq War. The funding, media, think-tank, and institutional centers of the Democratic Party have made it perfectly clear how hostile they are to our agenda: Ultimately, they will need to be defeated, not persuaded.

Still, there were exceptions, probably none as impressive as undocumented young people’s victory in forcing President Obama’s hand on Deferred Action for Childhood Arrivals after a series of confrontational direct actions in the lead-up to the 2012 election. Critically, our movement is much stronger now than it was then, with a greater degree of programmatic alignment and self-awareness as a political left. This doesn’t make the work ahead easy—only more possible. The only solution, then as now, is organizing.

Voting is the copper penny of political activity. The bare minimum. Those of us who seek revolutionary political-economic transformation should know that we have to join organizations and take courageous action and go to protests and write letters to the editor and talk to strangers about joining fights with powerful interests over things that matter to lots of people. Voting alone does next to nothing. Likewise, the voters for whom casting a ballot and posting on social media is the extent of their political engagement clearly have no business judging others who don’t vote or who vote in a way they don’t like. If they lose, clearly, the one they’ll actually be disappointed in is themselves.

So which “we” am I most powerful as a part of: a maddening three-month alliance that includes, yes, John Kasich and Michael Bloomberg but also Ilhan Omar and Angela Davis? Or a disorganized, unaccountable collection of individuals whose voice, even the one with which they announce themselves as nonvoters, is heard by no one?

[Jesse A. Myerson is a writer and organizer from New York City.]