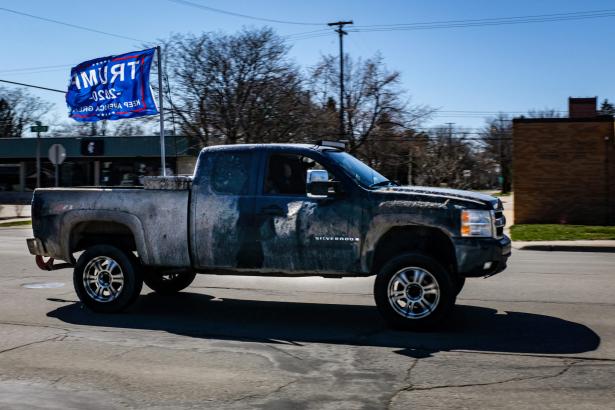 In his 2004 Democratic National Convention speech, Barack Obama said: “There is not a liberal America and a conservative America — there is the United States of America. There is not a Black America and a White America and Latino America and Asian America — there’s the United States of America.” If it was true then, it certainly isn’t true now. We are a nation on the edge of an increasingly hot civil war, one in which white supremacists are invading American cities, fomenting violence, and the overtly racist president they support sees the violence as benefiting him politically.

For the last two decades at least, Democrats have labored under the notion that if they were just reasonable enough, they could heal sharpening political divides in America. Meanwhile, Republicans spent the same time period inflaming every cultural resentment they could, maximizing racist, sexist and homophobic resentments among primarily white men. Republicans worked overtime to try to set urban and exurban populations against one another, disempowering and disenfranchising city dwellers through gerrymandering and voter suppression.

Donald Trump added kerosene onto the flaming bonfire built by Newt Gingrich, Karl Rove, Rush Limbaugh and Roger Ailes. He won the GOP primary not be being something radically different, but by accurately reflecting the existing dispositions of the Republican base. He embodies their ethos heart and soul, and they reward him with intense loyalty even as the economy begins to collapse and 180,000 Americans die in a pandemic he has ignored.

Many like David Neiwert have long predicted this would end in violence, but were largely dismissed. Conservatives are now both more desperate and more cocksure than ever before. As more Americans started living in cities, as the racial complexion of the nation diversified, as young people locked out of housing, trapped in debt and forced into dead-end jobs realized the need for a radical rethinking of the social and economic contract, and as a larger percentage of white people went to college and by extension became increasingly inoculated from the very worst forms of bigotry, the hold of conservative elements over the country has weakened. The Right has lost the culture war. American corporations, solicitous of the economic patronage of younger trendsetters and growing families, have established ever more left-leaning branding (at least on social and environmental matters.)

At the same time, however, political structures designed to empower the minority of conservatives in America to rule over its liberal majority are maintaining an apartheid-style government. The electoral college has put a conservative in the White House twice in the last two decades despite losing the popular vote, and threatens to do so again. The Senate majority belongs to conservatives who nonetheless control mostly rural states with a minority of the U.S. population, and the presence of the filibuster makes real change all but impossible even if Democrats were to retake the chamber. Gerrymandering ensures that the House of Representatives and state legislatures are stacked in favor of exurban dwellers and conservatives, with the result that even when Democrats do attain victory, those legislators are perforce more moderate than the majority of the Democratic base. And, of course, widespread voter suppression maximizes the disenfranchisement of urban progressives. Protected by these structures and with Donald Trump as president, conservatives feel that they are empowered to rule regardless of what majoritarian democracy would suggest.

The protests against police violence are reflective of this broader trend. Most police do not live in the cities they serve. They tend to be extremely culturally conservative and out of touch with the values of the taxpayers who fund them. In New York City, one of the nation’s most progressive enclaves where the president no longer dares to tread, the police union defiantly endorsed Donald Trump. Police violence against racial minorities has been a longstanding problem for decades, and one that has started to receive national attention through the diligent efforts of activists and through the presence of ubiquitous video technology to capture actions that in years past would have been sanitized in one-sided police reports. But it’s also the reality that in the age of rightwing radicalization, a large segment of the police have come more than ever to see themselves as occupying warrior forces in cities whose culture is threatening and alien to them. And the citizens of those cities know it and feel it– as psychological torment, legal harassment, financial hardship from court costs, and as scars on their bodies.

Protests in this context are inevitable. And why not? The people of America’s cities have a right to demand action from their city leaders. It’s a problem for America’s cities to sort out, as citizens demand that their representatives fear their political power as much as they do that of the police organizations.

But conservative white supremacist extremists are not content to allow that to play out. An empowered urban citizenry is a direct threat to their power, an acceleration of their loss of control. The “Boogaloo” movement wants to instigate a civil war along largely racial lines precisely to settle accounts before they suffer any further cultural or demographic declines.

So a few days ago a radicalized Trump-supporting teenager drove across state lines armed for a violent confrontation against protests, and murdered two people and injured a third. He did so after being welcomed by local police, given water, and ignored when he attempted to surrender. He is being celebrated in right-wing circles for doing so, and so-called “Christian” groups are funding his legal defense.

Yesterday, convoys of out-of-town trucks and SUVs bearing Trump flags stormed into Portland with the intent of creating confrontation. They allegedly rolled through groups of protesters in their vehicles, shooting projectiles and pepper spray into the crowds. In the ensuing violence, one of the far-right Trump supporters was shot and killed.

The Portland murderer should, of course, be brought to justice. There is no excuse for deadly violence. But all of this is happening because white supremacists are invading American cities with the express intent of starting a civil war. President Trump sees them as “very fine people” who are on his side. He sees the violence as politically beneficial, a useful cudgel against Democratic nominee Joe Biden–even though the violence is happening while Trump himself is president, not Biden.

Trump’s election theme is that Americans won’t be safe in a Biden presidency. The opposite is true. Americans won’t be safe as long as a white supremacist president is leading a movement of bigots to incite a civil war, and attempting to ensure that the majority of Americans with cosmopolitan, egalitarian values remain politically disenfranchised and under the thumb of those who fear and despise them.

[David Atkins is a writer, activist and research professional living in Santa Barbara. He is a contributor to the Washington Monthly's Political Animal and president of The Pollux Group, a qualitative research firm.]