Which Way Germany? -Conflict Between Peace Forces and Militarists 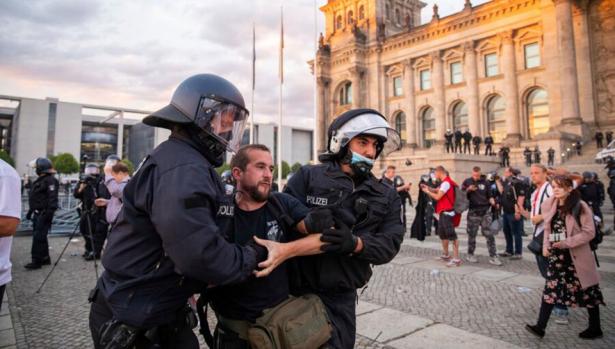 On August 29 police had to forcefully remove right wing pandemic deniers from the Bundestag in Berlin when thousands of them tried to force their way into the building., Christoph Soeder/AP

I’ll never forget the day my father’s ancient jalopy got stuck boarding the New York-Jersey City ferry; two wheels on the dock, two on the boat, the motor stalled, my father frantic, my mother scolding, cars behind us honking, and me, just 6, looking at the swirling waters below. Two muscular ferrymen finally pushed us back on land.

The gas pipeline Nord Stream 2 has markedly different proportions. But it’s also stuck; one end near Vyborg in Russia, the other, after a thousand km under swirling Baltic Sea waters, stalled only 164 km short of its safe goal, Sassnitz in eastern Germany.

Here, too, there is plenty of honking – and more than a few muscle men, with Germany half on and half off its policy toward Russia, between rapprochement and confrontation. Donald Trump offered his customary words of wisdom; blustering threats if Germany favors pipelines over ever greater military build-up. His buddies, far-right Senators Ted Cruz, Tom Cotton and Ron Johnson, warned little Sassnitz, pop. 9186, of “crushing economic and legal sanctions” if it lets the pipeline land there.

Some German business and political leaders were outraged at this crude interference and consider it far wiser to do business with Russia, selling it cars, chemicals, machinery and farm products, than kowtowing to arms manufacturers and other war hawks on both sides of the Atlantic. This at a time when, with more and more weapons along Russian borders, one little false move, a maneuver missile accidentally fired a bit too far eastward, a fighter pilot briefly losing his bearings, a misunderstood message, could unleash a world-destroying nuclear war. Like 1962 but at far closer range.

For Angela Merkel’s government it was two wheels on and two off. Then came Belarus. And then a poisoned Alexei Navalny. Both provided the hate-Russia crowd with exactly what they yearned for, to push things their way and counteract the wishes of a majority of Germans who want to stay peaceful.

Yet both issues were far from being so very clear-cut. As the keen analyst and one-time British ambassador Craig Murray wrote:

“I have no difficulty at all with the notion that a powerful oligarch or an organ of the Russian state may have tried to assassinate Navalny… What I do have difficulty with is the notion that if Putin, or other very powerful Russian actors, wanted Navalny dead, and had attacked him while he was in Siberia, he would not be alive in Germany today....One thing we know about ‘Novichok’ for sure is that it appears not to be very good at assassination… If the Russian secret services had poisoned Navalny at the airport before takeoff as alleged, why would they not insist the plane stick to its original flight plan and let him die on the plane? ….Next, we are supposed to believe that the Russian state, having poisoned Navalny, was not able to contrive his death in the intensive care unit of a Russian state hospital. …If Putin wanted him dead, he would be dead… There are a whole stream of utterly unbelievable points there… Personally I do not buy a single one of them, but then I am a notorious Russophile traitor.”

Nor is the Belarus uprising  as clear-cut as European leaders and op-ed writers quickly decided. It is obvious that Lukachenko’s 80% election victory was a poor joke; it seems evident that many or most people there want to get rid of him after 26 years, for a wide variety of reasons.

But EU support for protests hypocritical

But the outside support given the protests is steeped in hypocrisy. When Lukachenko seemed to be leaning westward the invective softened, there was a sudden increase of trust in Lukashenko, as in 2010, when the Polish and German foreign ministers and the Lithuanian president met both him and the opposition, and found that he might even be won over - and was supported by a majority of his citizens.

“Our energy producers are ready to deliver 100% of the oil you need at competitive prices. We are the biggest energy producer in the world and all you have to do is call us…. The U.S. wants to help Belarus build its own sovereign country… Inspired by what I saw at Hi-Tech Park (in Minsk); a great example of how Belarus can seize its extraordinary growth potential by embracing forward-looking economic policies and smart regulation. It’s clear how impactful American investment can foster prosperity across the globe.”

He offered prosperity. Was he really thinking of power, not just fuel-based but strategic? Lukachenko has indeed maintained a merciless, tight grip. But Belarus is the only ex-Soviet republic to maintain public ownership of much of industry, instead of oligarch control, and permits no giant private landowners. Is a hope for good pickings behind western support for the current uprising? As for noble words; nasty as arrests and beatings in Minsk certainly are, they cannot compare with those of brutal cops elsewhere, often aiming missiles at heads, eyes and hands - in Chile, Ecuador, Iraq, France (against the yellow jackets) and the new buddy, Bahrein, or for that matter in Baltimore, Minneapolis or Staten Island. Are jail beatings in Belarus worse than in Riyadh or Abu Ghraib – or CIA “black sites”, with tortures worse than those of the Inquisition? All are horrible, but denouncing some and downplaying or ignoring others is pure hypocrisy.

Most important of all, perhaps; while Kharkov in the Ukraine is about 400 miles from Moscow, Vitebsk in Belarus is less than 300, not much farther than New York to Washington. And the US Army and Raytheon are working on a new Long Range Precision missile which can hit targets at least 310 miles away.

Ups and downs in Germany are less dramatic than in Minsk or the USA, now suffering under the corona pandemic, terrifying forest fires and worrisome election-fever, with an outcome far from certain – and possibly even leading to armed violence.

But Germany, too, could veer left or right, when countless jobs are gone, small businesses vanish, evictions multiply. Some omens foreshadow grave differences. Can humane pressures force the government to accept more than a few token planeloads with 400 child refugees from the miserable, burnt-down camp on Lesbos, where 13,000 refugees lost even their miserable tents and shanties?  Most fled Afghanistan, Iraq or Syria where foreign warriors destroyed their homes and livelihoods.

And then came pandemic deniers

In German cities a re-named “Querdenken711” movement has been gathering crowds. ”Querdenken” -  “crosswise thinking”, rejecting both left and right; it is for “self-determination” and “love” – and strictly against face masks, social distancing, or even the existence of an epidemic. Its mysterious, hitherto unknown leaders offer no other program. Many of those marching and filling squares simply oppose a world-wide Bill Gates “compulsory vaccine plot”, all vaccinations, or the current “conspiracy  government”. A few are non-party “super-leftists”. Much more conspicuous are far-right Alternative for Germany (AfD) members and groups with fascist tattoos and flags; a mob of them even stormed the Bundestag building, whose doors were defended (peculiarly!) by only three cops. Will this movement fade – or grow?

And what will follow the uneasy coalition between Merkel’s Christian Democrats and the Social Democrats after next year’s elections? The Social Democrat chosen to lead the campaign against whoever succeeds Merkel – still an ongoing rivalry - is Olaf Scholz, now Vice-Chancellor and Finance Minister. But poor Olaf was hit by a scandal about a phony software giant whose crooked organizer is missing (as are 1.9 billion euros), all of which he somehow failed to notice – or to deal with. And now he faces another scandal. While mayor of Hamburg he seems to have helped save the big Warburg bank from paying millions in back taxes – and later lied about his secret meetings with its boss.

With a key congress due at the end of October it is facing a key issue. If it becomes possible to form a coalition government with the SPD and the Greens (current polls don’t make that possible but they could change), should the LINKE weaken or drop its basic demands to oppose NATO or sending any Bundeswehr soldiers to fight in foreign arenas. That’s a condition set by the war-willing Social Democrats and Greens. It could thus achieve a few coalition cabinet seats, always the dream of some? Or should it stick to its position: no cabinet seats but still remaining the only “party of peace” in the Bundestag?

This question will affect the choice of new LINKE leaders; the current co-chairs, after two terms, are stepping down. Two are already in the running. One, from the party’s “pragmatic wing”, is a leader in the LINKE-Social Democrat-Green- government in East German Thuringia. The other has led the LINKE quite successfully in opposition in the  West German state of Hesse. She is from the militant wing of the party. Others may also run, but at present it looks possible that these two may join in a balanced slate which would make the LINKE the first party with two women in top leadership. If the two remain friendly it could also succeed in keeping both sides of the party – not only geographically – in one piece, safe from the threatening waters swirling beneath them. Like those ferrymen long ago, more working-class muscles, politically speaking, might also help the divided party to move and grow. It will be needed!

[Victor Grossman (born in New York City, 1928) is an American journalist who deserted the US Army in 1952 under McCarthy-era pressure by swimming across the Danube River to the Soviet Zone of Austria. He has lived in East Berlin ever since. A Socialist Defector: From Harvard to Karl-Marx-Allee was just published by Monthly Review Press.  His other books include a history in German of the Spanish Civil War, Madrid du Wunderbare, and his English-language autobiography, Crossing the River (University of Massachusetts Press).]