"The next White House should belong to the people, not corporate America," said Jamaal Bowman, a New York Democrat. 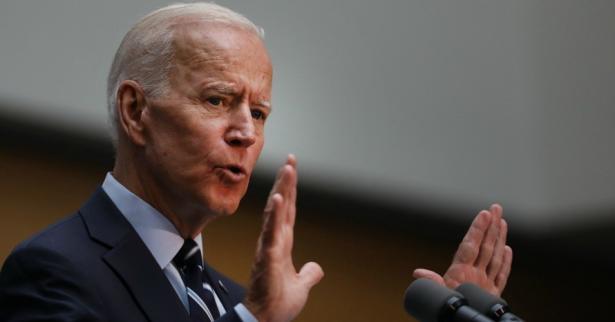 Progressive activists have long said that Joe Biden must do more to show he cares about Main Street as much as about Wall Street, Spencer Platt/Getty Images

A group of progressive lawmakers, candidates, and organizations have collectively signed a letter urging Democratic presidential nominee Joe Biden to eschew appointing corporate executives and lobbyists to his administration if he is elected, Politico reported Friday.

"One of the most important lessons of the Trump administration is the need to stop putting corporate officers and lobbyists in charge of our government," the letter, which was delivered to Senate Majority Leader Mitch McConnell (R-Ky.) and Senate Minority Leader Chuck Schumer (D-N.Y.) on Friday morning, states.

"The revolving door needs to stop, not just change direction every few years."
—Coalition of progressives

The letter specifically argues that K Street and Wall Street executives should not be nominated for any position that requires Senate confirmation.

"As elected leaders, we should stop trying to make unsupportable distinctions between which corporate affiliations are acceptable for government service and which are not," it asserted.

Grijalva told Politico that the letter "is not addressed to Biden" specifically, but that "there's an understanding that he’d be in charge and be the person making nominations."

The letter is a reminder of the stark differences between the progressive and the corporate wings of the Democratic Party—Ocasio-Cortez famously said earlier this year that "in any other country, Joe Biden and I would not be in the same party"—that would likely come to the forefront should President Donald Trump be defeated.

Although Trump loves to tout the stock market gains that have occurred during his tenure, Wall Street has donated more money to Biden and Democrats this election cycle than to the president and his party. Biden has praised and reassured corporate leaders, shareholders, and the wealthiest Americans, promising to not "demonize" them and vowing that "nothing would fundamentally change" for them if he is elected.

Many progressives assert that there is much cause for concern, if Biden's tenure in Congress and as vice president are any indicator of how he would run the country if elected.

The former senator from Delaware—a state known as a haven for banks and corporate headquarters—cast key votes to deregulate the banking and financial services industries, which showered him in campaign cash and other support. Biden was also a leading champion of a bill that made it much more difficult for Americans to declare bankruptcy—just before the most devastating economic crisis since the Great Depression.

As vice president during what many progressives derisively called the "Goldman Sachs administration"—for the number of Wall Street and corporate executives it employed, the amount of corporate donations it received, and how it was influenced by big money interests—Biden played a key role in advancing what many saw as President Barack Obama's Wall Street and corporatist agenda.

The new letter addresses some of these concerns, including the so-called "revolving door" between the public and private sectors that has characterized both Republican and Democratic administrations.

"The revolving door needs to stop, not just change direction every few years," it says.

Left-leaning lawmakers including Ocasio-Cortez have previously warned Biden not to take progressives for granted, and to better address the needs of what Sanders and others have called the "99 Percent."

"We're going to hold Biden's feet to the fire on his progressive commitments that he has made."
—Faiz Shakir

"I think people understand that there are limits to what Biden will do and that's understandable—he didn't run as a progressive candidate," Ocasio-Cortez said earlier this year. "But, at the bare minimum, we should aspire to be better than what we have been before."

Many progressive activists, wary of being spurned and burned again as they feel they were by Obama, are nevertheless preparing to—as Noam Chomsky, Medea Benjamin, and other left activists said in a recent letter of their own—"dump Trump, then battle Biden."

"Bernie has been very clear that after the election ... we're going to hold Biden's feet to the fire on his progressive commitments that he has made," Faiz Shakir, a senior advisor to Sanders, told the Los Angeles Times on Thursday.

Shakir ended on a positive note, acknowledging that Biden "has made some pretty solid commitments" on climate policy.

Progressives note that it was incessant pressure from grassroots activists that made Biden's $2 trillion green energy plan as ambitious as it is, and they're betting and hoping that more of the same persuasive persistence will bear better fruit than the sour grapes of the Obama, Clinton, and Carter presidencies.