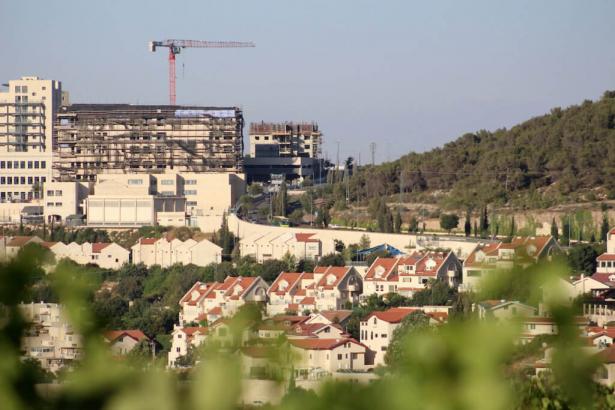 The Israeli settlement of Efrat within the Gush Etzion settlement bloc between the Palestinian cities of Hebron and Bethlehem in the West Bank on June 30, 2020.,Mosab Shawer/APA Images

According to the group, the advancement of the plans by the Israeli Civil administration, make 2020 the “highest year on record in terms of units in settlement plans promoted since Peace Now began recording in 2012.”

It is possible, the group noted, that the Civil Administration’s Higher Planning Committee could convene again before the end of the year and advance even more settlement plans.

The group noted that all of the new units except for two were approved in areas that Israel would have to evacuate in the case of a two-state solution that adheres to the borders drawn in the Geneva Initiative.

Among the plans that were advanced were hundreds of illegal settler outposts that were retroactively recognized and approved. Israeli outposts, which unlike settlements are built without initial government approval, are considered illegal under Israeli law itself, but are frequently “retroactively legalized” by the government in proceedings such as this one.

Peace Now also noted that the plans included 560 units in the Har Gilo settlement, which was built on the lands of al-Walaja village and lies in the hills between Bethlehem and Jerusalem.

The new “neighborhood” in Har Gilo, Peace Now notes, would actually be larger than Har Gilo itself, and would effectively further isolate al-Walaja from the surrounding village of Battir, and Battir from Bethlehem city.

Not only are the lands in question central to Palestinian life in the Bethlehem area, with many residents enjoying hikes and nature trails between Bethlehem, Battir, and al-Walaja for decades, the land also “constitutes some of the only uninhabited fertile land reserves for Bethlehem, which currently is cut off by the West Bank barrier to its immediate north and west,” Peace Now says.

In our second episode of the COVID-19 in Palestine series, residents of the al-Walaja village told Mondoweiss that Israeli forces have continued their policy of home demolitions in the village during the coronavirus pandemic.

"The move is the first major demonstration of Defense Minister Benny Gantz’s bowing to the ‘Greater Israel’ settlement agenda that would in reality bring about a permanent undemocratic one-state reality,” Peace Now said in a statement.

“By doing so, Israel is signaling to the world its bi-partisan support for the end to the concept of a two-state solution and a Palestinian state – the paradigm that until now has largely shielded Israel from formal pressure over its 53-year occupation. The settlement enterprise is not in Israel’s national or security interest, and is a strategic mistake at the national and international level,” the group said.

Israeli settlements are considered illegal under international law, and have been widely condemned by the international community as one of the major barriers to achieving peace in the region and justice for Palestinians.

It is estimated that there are over 600,000 Israeli citizens living in these illegal settlements in the West Bank and East Jerusalem.

Making the most of a Trump presidency

Groups like Peace Now have noted a clear spike in the approval of new settlement construction during the Trump Era, “when Israeli settlement activity has dramatically increased since the US Administration has shown less pressure on settlement expansion and Israeli domestic politics have correspondingly pushed for more activity.”

Analysts suggest that this week’s slate of approvals are part of a larger effort being made by the Netanyahu government to formalize as many settlements as they can while US President Donald Trump is in power.

While former Vice President Joseph Biden does have a longstanding record of pro-Israel policies, and has used his campaign to double down on his support of Israel, it remains unclear if a Biden administration would be as supportive of the kind of settlement expansion that the Trump administration has celebrated.

“The dynamic this is creating is that rather than shift course now in a way designed to start on a positive note with a different administration, the Israeli government is trying to hedge for the possibility that we are in the final months of the Trump administration by cramming in as much as it can under the wire,” Koplow said.

Koplow also pointed out the fact that the new wave of approvals feature many units in settlements “deep inside” the West Bank “in spots that are chosen purposely for their role in disrupting any potential Palestinian contiguity in a future state.”

Annexation back on the table

Critics have also pointed to Thursday’s slate of approvals as officially signalling the end of the pretense that Israel had halted its annexation plans in exchange for normalization and full diplomatic relations with the United Arab Emirates (UAE).

The new slate of approvals is the first time new settlement homes have been advanced since Israel signed normalization deals with the UAE and Bahrain.

When the UAE announced its deal with Israel, it emphasized the fact that as part of the agreement, Israel would be putting a stop to annexation plans that were being touted by Israeli Prime Minister Benjamin Netanyahu for months, and were supposed to be announced officially on July 1st.

The claim that the UAE was responsible for halting annexation drew widespread criticism from Palestinians and their supporters, who said that not only was de facto annexation already a reality in the oPt, but that Israel would continue its policies of displacement of Palestinians into the future.

While the the construction of new settlements does not necessarily mean that Israel will be immediately applying sovereignty over the settlements and other swaths of the West Bank, settlement expansion is largely viewed as a precursor to annexation.

As a direct result of these new settlement units, Palestinians’ access to their lands in places like the Bethlehem area, for example, will be further restricted in the coming months, until the likely event that they will be full prevented from reaching their lands in and around the settlements.

For many Palestinians, annexation is more than just the official recognition of Israeli sovereignty over parts of the oPt, but rather the continued dispossession of Palestinians from their land, through settlement expansion, home demolitions, and land confiscations.

Israel’s decision to advance plans for new settlement units, just weeks after signing these latest normalization deals, signal for many an end to the false pretense that annexation was on hold, and the ushering in of a reality that many states in the Middle East region will continue to make normalization deals with Israel, with or without the approval of Palestinians.

[Yumna Patel is the Palestine correspondent for Mondoweiss.]