books Where are the Social Movements in Fiction

Ten guesses why social justice activism rarely appears in our novels and movies. In the midst of major popular uprising, where are the lists of stories that would draw us into the heads and hearts of activist characters taking on injustices they face 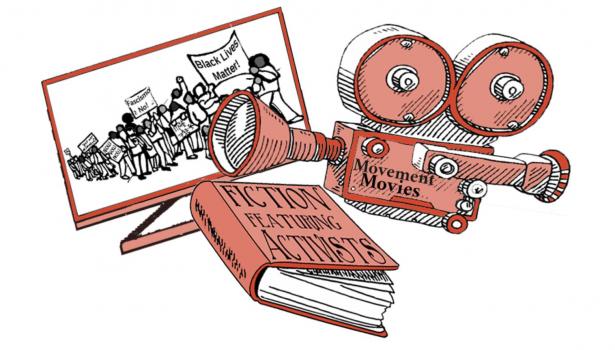 When big events hit, people seek perspective in books and movies. There is, as Rich Benjamin writes in The Intercept, “a wide, multifaceted desire for books that can help a person digest the current moment and the uncharted future.” With the 2020 Black Lives Matter uprising in the U.S., libraries, bookstores, publishers, and online media sites are featuring lists of works headlined “Guides to Antiracism” and “Black Lives Matter,” showcasing an array of memoirs and histories of racial injustice and struggle in the US.

The sudden scramble of mainstream white culture to highlight what for many has been a lifelong daily atrocity may be questionable, but these lists are concrete proof that social movements do raise consciousness. While not everything on the lists is profound, many excellent works are being brought forward, including searing social analyses by activist critics like Assata Shakur, Angela Davis, and many others.

The lists also include novels and feature films—as well they should, as good fiction is uniquely able to pull us into worlds where we’ve never been: a past historical era, a future dystopia, or a Black working class neighborhood across town, allowing us to feel what the characters are going through and connect to their experiences and perceptions through the creator’s portrayal of them. Borrowing words from one my favorite novelists, Paule Marshal, fiction lets the creator “operate on many levels and to explore both the inner state of [the] characters as well as the worlds beyond them.”

But the lists seem lacking in one area: where is the fiction—movies, novels, TV programs—about social movements? In the midst of a major popular uprising, where are the lists of stories that would draw us into the heads and hearts of activist characters taking on injustices they face? The novels where we can inhabit the characters as they live the day-to-day details of their struggles? The television shows that let us accompany activists as they paint signs and pack water bottles to go down to the White House or the local police station to march, chant, kneel or pull down racist statues?

As an activist who loves fiction, I’ve long been struck by the potential for fascinating stories focused on activists’ lives and struggles. 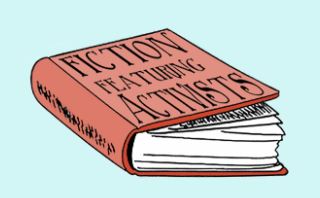 Yet, despite the huge reservoir of real movement experience to draw from, I find surprisingly few such stories on these lists (or anywhere else in mainstream culture). Yes, there are some dramatic retellings of the stories of great movement figures, like Martin Luther King, Jr., Malcolm X, and others, but what about stories of everyday activists, where we readers and viewers get to be with them through the excitement, dilemmas, delights, and, yes, dangers, of participating in a social justice movement? There are some, but not many, especially considering the inspiration, emotion and drama of activist life.

We see untold stories of police, detectives, special forces, and such, pursuing justice in ways that uphold the status quo. Where are the stories of activists pursuing the deeper justice of social transformation?

And there’s the delight we take in the adventures of iconoclasts, mavericks and numerous other disrupters of the prevailing order. Yet the rebels we warm to in movies don’t often include portrayals of people truly confronting the system.

Siding with the underdog and questing for justice are universal story themes. We see countless variations on them in all genres of fiction, from heroic quests to right wrongs to densely populated sagas of challenging tyrants–a fantasy staple–finally culminating in liberation. Nonetheless, with few exceptions these narratives tend to skirt the actual depiction of social justice movements, even though such movements are what most commonly achieve real justice for oppressed people, the quintessential underdogs.

Why aren’t the current lists full of fiction set in the Black Power, labor, American Indian, Chicano, and so many other key movements? Why don’t we have lists of TV shows about people challenging police violence, rather than ones that romanticize policing? Where are the westerns about Native activists fighting mining or fossil fuel industries? The rom-coms starring young people who meet in an environmental or anti-racist movement; the wrenching dramas about peace activists pouring their blood on Trident missiles?

The present moment of movement upsurge and political turmoil is surely a perfect time to bring out such fiction. We need works that not only distract and entertain, but also inspire and uplift. Where, then, are the lists of social movement fiction?

Here are some speculations about why fiction featuring activism, activists, and especially activist movements is sparse, marginalized and, when it exists, often unkind to the activists it does depict.

1. Most fiction authors are not activists. Of course, most authors aren’t detectives, spies, or space travelers, either.

2. Mainstream histories tend to assume that change comes about through the actions and decisions of “great men”—generals, kings, the wealthy and powerful—rather than collective grassroots movements that actually power major social transformation. This mindset has been inculcated for centuries, so it’s little wonder mainstream fiction exhibits a similar pattern.

3. Along this same individualistic line, fiction tends to center on individual characters tackling universal dilemmas and challenges. Even a character shown engaging in activism often acts individually, doing their own letter-writing campaign or staging a lonely protest against some authority. In real life, such solitary activism is much rarer than collective action, but perhaps from a craft point of view it is easier to portray than a cast of thousands?

4. With activism and social movements so marginalized from the dominant narrative, featuring them in the story arc might not even come to the author’s mind.

5. Activists themselves write huge amounts—mostly nonfiction, but they write fiction, too. However, I’ve found that these authors generally focus on problems they care about—such as racism—and how these issues affect the characters. For whatever reason, placing their characters in social movements confronting the problems seems much less common—something that would be great to discuss among activist writers.

6. Anti-Communist persecution of radical authors, filmmakers and other artists has long chilled production and publication of social-justice-oriented fiction. It would be interesting to know the extent to which past and present red-baiting continues to discourage literature, film and TV depictions of social justice movements, as well as ways in which rising social movements open the way for more fiction featuring activists.

7. Fiction featuring activists that does exist is generally not widely promoted or sold. Popularity—on Amazon, Netflix, Google, best-seller lists—drives sales, which drive popularity, which drives ranking and reviews—which drive sales. As bell hooks says, “[t]he primary way what the reading public knows that a book exists is either they see it displayed in bookstores and/or they read reviews…When work is dissident and progressive it is unlikely to receive very many mainstream reviews. (Feminism is for Everybody, bell hooks, Routledge, 2014) Nonetheless, many progressive social critics—including bell hooks—do become widely known, especially in times of social upheaval. But works of fiction about such upheavals are still not often seen.

8. Where activists do appear in mainstream entertainment, many of the portrayals tend not to encourage readers and viewers to empathize, admire, or identify with them in their efforts to challenge the status quo. Activists are often stereotyped as angry, extremist, silly, full of weird ways, and other unattractive traits. Could this jaundiced view of activists make creators reluctant to feature them?

9. Dominant culture does not make it easy for people to understand how social movements work, nor to get details of how people organize, raise consciousness, and all the rest of what’s involved in propelling social transformation. More fiction that actually shows such details in engaging and relatable ways could spark ideas and impart lessons dominant interests do not want widely shared.

10. As my colleague, Dorothy Smith, said to me, we have been educated from childhood to conform, not to speak out. Dissidence is considered bad behavior and is regularly punished, especially when coming from those most oppressed. This conditioning is so strong, and fiction’s potential to open people’s minds to activists and social movements so thoroughly marginalized, that we fail even to notice its absence.

Conspiracy theories? Well, we do live in a society where a few people control the vast majority of wealth and power, including creation of and access to education and entertainment.

Whether or not you’d consider that a conspiracy, and whether or not these guesses are good, the dearth of fiction featuring activists and social justice movements is a problem, given how vital activists and activism are for the survival of our planet.

We need more works of fiction featuring activists and social justice movements. We have only to look at how much progress—though not enough!–has been made in the representation of people of color and women, so long marginalized and stereotyped in fiction, to recognize the importance for activists of being fully and fairly portrayed, and being heard in their own voices, as well as the potential dangers of their being misrepresented.

Let’s recognize the works of fiction featuring activists that do exist and include them on the lists! Let’s look with generosity but open eyes at new efforts like The Trial of the Chicago 7. And let’s create more fiction that fully and fairly represents everyday activists and activist movements.

As a step in that direction, Protect Our Activists is compiling a Fiction Featuring Activists List, including novels, movies, TV shows, musicals, children’s stories and narrative games where activists and social justice movements play a significant role.

To be on the list, a work of fiction must have at least one named social justice activist character significant to the plot, who is shown “onscreen” engaged in activism–attending or organizing marches, canvassing, holding meetings, etc. This simple standard is inspired in the well-known Bechdel Test for works featuring women, and is, like that one, a first step rather than the best we aspire to.

It’s important to lift up the works on the list for giving a place to activists and activism. Yet, as all oppressed peoples know, merely appearing in the media is not enough; representation must be fully humanizing and fair. It’s important to pay attention not just to the presence or absence of activists and social movements, but to the nuances of their portrayal—looking for depictions that show the full humanity of ; noticing where activists appear, and depictions that overtly or subtly stereotype activists.

For decades she was also an organizer and translator for labor unions and worker organizations in Mexico and the US, as well as providing bilingual support for Latin American immigrants in educational, political and healthcare settings. She has long been a participant-observer of activist culture, focusing in on the experience of being an activist—the risks, tensions and dangers, as well as the joys, of daily life in the belly of the Beast activists are struggling to transform.

Juliana has been part of movements for a just society all her life, from the Civil Rights and anti-Vietnam war movements as a child and teen, to social movements in Mexico, where she lived for nearly two decades, and working for justice, peace and inclusion at many levels and with many groups and movements in the DC metropolitan area where she now lives, and elsewhere in the U.S. and Latin America.

Her work includes making movement music with other social justice oriented musicians in Mexico and the US; also artistic, literary and activist explorations with young people–including her own daughter, Rainwood House Sings co-author and illustrator Sophie Barnet-Higgins, and a number of collective creative writing programs with neighborhood children and youth.]