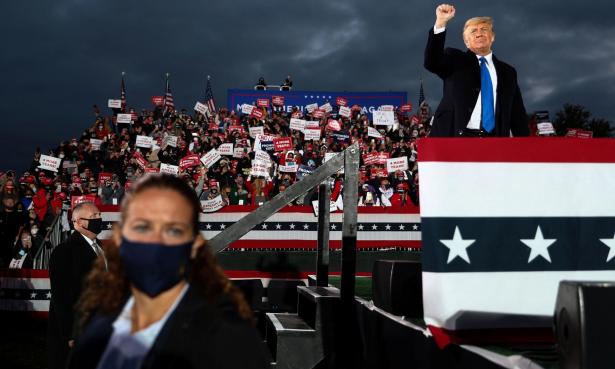 Donald Trump raises a fist to the crowd following his speech in Circleville, Ohio, on Saturday,Tom Brenner/Reuters

The Republican party has become dramatically more illiberal in the past two decades and now more closely resembles ruling parties in autocratic societies than its former centre-right equivalents in Europe, according to a new international study.

In a significant shift since 2000, the GOP has taken to demonising and encouraging violence against its opponents, adopting attitudes and tactics comparable to ruling nationalist parties in Hungary, India, Poland and Turkey.

The shift has both led to and been driven by the rise of Donald Trump.

By contrast the Democratic party has changed little in its attachment to democratic norms, and in that regard has remained similar to centre-right and centre-left parties in western Europe. Their principal difference is the approach to the economy.

The new study, the largest ever of its kind, was carried out by the V-Dem Institute at the University of Gothenburg in Sweden, using newly developed methods to measure and quantify the health of the world’s democracies at a time when authoritarianism is on the rise.

Anna Lührmann, V-Dem’s deputy director, said the Republican transformation had been “certainly the most dramatic shift in an established democracy”.

V-Dem’s “illiberalism index” gauges the extent of commitment to democratic norms a party exhibits before an election. The institute calls it “the first comparative measure of the ‘litmus test’ for the loyalty to democracy”.

The study, published on Monday, shows the party has followed a similar trajectory to Fidesz, which under Viktor Orbán has evolved from a liberal youth movement into an authoritarian party that has made Hungary the first non-democracy in the European Union.

India’s Bharatiya Janata Party (BJP) has been transformed in similar ways under Narendra Modi, as has the Justice and Development party (AKP) in Turkey under Recep Tayyip Erdoğan and the Law and Justice party in Poland. Trump and his administration have sought to cultivate close ties to the leadership of those countries.

The Republican party has remained relatively committed to pluralism, but it has gone a long way towards abandoning other democratic norms, becoming much more prone to disrespecting opponents and encouraging violence.

“We’ve seen similar shifts in parties in other countries where the quality of democracy has declined in recent years, where democracy has been eroding,” Lührmann said. “It fits very well into the pattern of parties that erode democracy once they’re in power.”

“The demonisation of opponents – that’s clearly a factor that has shifted a lot when it comes to the Republican party, as well as the encouragement of political violence,” she said, adding that the change has been driven in large part from the top.

“We have several quotes from Trump, that show how he has encouraged supporters to use violence against either journalists or political opponents.”

In western Europe, centre-right parties like Germany’s Christian Democratic Union and Spain’s People’s party have stuck to their commitment to democratic norms. By the same measure, Britain’s Conservative party has moved some way along the liberal-illiberal spectrum but not to the Republicans’ extremes.

The institute has found the decline in democratic traits has accelerated around the world and that for the first time this century, autocracies are in the majority – holding power in 92 countries, home to 54% of the global population.

According to V-Dem’s benchmark, almost 35% of the world’s population, 2.6 billion people, live in nations that are becoming more autocratic.

• The graphic accompanying this article was amended on 26 October 2020 to reduce the number of parties shown.

Julian Borger is the Guardian's world affairs editor. He was previously a correspondent in the US, the Middle East, eastern Europe and the Balkans. His book on the pursuit and capture of the Balkan war criminals, The Butcher's Trail, is published by Other Press. Click here for Julian's public key