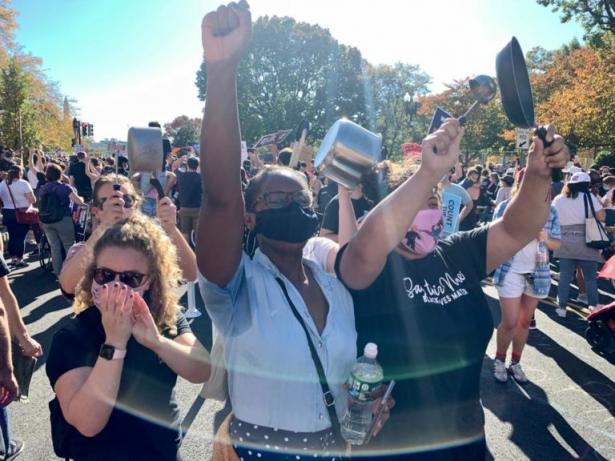 Joe Biden has been elected the 46th president of the United States, achieving a decades-long political ambition and denying Donald Trump a second term after a deeply divisive presidency defined by a once-in-a-century pandemic, economic turmoil and social unrest.

Biden won the presidency by clinching Pennsylvania and its 20 electoral votes, after several days of painstaking vote-counting following record turnout across the country. The win in Pennsylvania, which the Associated Press called at 11.25am ET on Saturday with 99% of the votes counted, took Biden’s electoral college vote to 284, surpassing the 270 needed to win the White House.

“In the face of unprecedented obstacles, a record number of Americans voted, proving once again that democracy beats deep in the heart of America,” Biden said in a statement after the result was called on Saturday, exactly 48 years after he was first elected to the US Senate.

“With the campaign over, it’s time to put the anger and the harsh rhetoric behind us and come together as a nation. It’s time for America to unite and to heal.”

The president-elect, joined by his running mate, Kamala Harris, was expected to address the nation later on Saturday.

In electing Biden, the American people have replaced a real estate developer and reality TV star who had no previous political experience with a veteran of Washington who has spent more than 50 years in public life, and who twice ran unsuccessfully for president. Trump is the first incumbent to lose re-election since 1992, when Bill Clinton defeated George HW Bush.

Despite a long-standing tradition of peacefully accepting the outcome of US elections, Trump refused to concede and threatened unspecified legal challenges regarding the vote counting process.

Biden’s victory, fueled by women and people of color who spent the last four years resisting and mobilizing against Trump, was celebrated as a repudiation of a president who shattered democratic norms and stoked racial and cultural grievance. Cheers, honking and dancing erupted in emotional displays of joy on the streets of major cities across the country, including in the nation’s capital, where Biden will be sworn into office on 20 January.

However, the nation’s deep divisions were laid bare as pro-Trump protesters continued to claim that the election had been stolen from a president who millions still view as a defender of “law and order” at home and of “America first” abroad.

With turnout projected to reach its highest point in a century despite the pandemic, a fearful and anxious nation elected a candidate who promised to govern not as a Democrat but as an “American president” and vowed to be a unifying force after four years of upheaval.

The result also marked a historic milestone for Harris, 56, the daughter of Jamaican and Indian immigrants who will become the first woman – and the first woman of color – to serve as vice-president. Her presence on the Democratic ticket was a rejoinder to Trump, who spent four years scapegoating migrants and attacking women and communities of color.

The outcome threatened to send convulsions across the country, as Trump and his campaign continued to make baseless claims of voter fraud and vowed to challenge the results.

“Legal votes decide who is president, not the news media,” the president said in a statement, which was sent while he played golf at his golf course in Virginia.

Trump’s statement included a litany of unfounded assertions about the vote-counting process, and attempted to undermine faith in the integrity of the electoral system by advancing a conspiracy about “legal” and “illegal” votes.

At 77, Biden is set to become America’s oldest president. His triumph came more than 48 hours after polls closed on election day, as officials in key states worked furiously to tally ballots amid an unprecedented surge in mail-in voting due to the coronavirus pandemic, which has killed more than 230,000 people and infected millions.

A father and husband who buried his first wife and his infant daughter in 1972 after they were killed in a car crash, and decades later buried his adult son after he died from brain cancer in 2015, Biden sought to empathize with Americans who lost loved ones to the coronavirus.

Biden won by reclaiming key states that make up the so-called “blue wall” that Trump knocked down in 2016, and by expanding Democrats’ reach in places like Arizona, a reliably conservative state that has progressively slipped away from Republicans over the last four years. According to the Associated Press, Biden won Wisconsin, Michigan and Arizona.

National polling showed Biden with a consistent lead as Americans grew increasingly frustrated with Trump’s erratic handling of the pandemic, particularly in the weeks after his own diagnosis and hospitalization from the virus.

Though Biden received nearly 75m votes, the most for any presidential candidate in history, it remained uncertain whether the nation had delivered the sweeping denunciation of Trump and Trumpism that the former vice-president envisioned when he declared the election a “battle for the soul of the nation”.

As of Saturday, Trump had garnered more than 70m votes, more than Barack Obama won in his historic 2008 victory, which remained the record until this year.

Predictions of a competitive race in Iowa, Ohio and Texas fell short as Trump proved unexpectedly resilient in battleground states. In the Senate, Republicans were increasingly confident in their ability to maintain control of the chamber, setting the stage for blistering political battles with a future Biden administration and dimming hopes of swift action on progressive priorities on the economy, climate and immigration.

The dynamic will test Biden’s enduring faith in bipartisanship, despite having witnessed the hardball tactics of his former Senate colleagues during the eight years he served as Barack Obama’s vice-president. This could also strain the fragile detente with progressives in his own party, who are demanding he meet Republican opposition with a similar take-no-prisoners approach.

A fresh start for America ...

... as Joe Biden and Kamala Harris win the US election. The American people have disavowed four years of a thuggish presidency. They have chosen decency over dysfunction, fact over fiction, truth over lies, and empathy over cruelty. They have rejected the last four years of ugliness, divisiveness, racism and sustained assaults on constitutional democracy. And even as Trump plots legal challenges and levies unfounded claims of fraud, it is clear America is moving on.

Removing Trump from the White House is one thing – fixing America is another. Many of the systemic issues that afflict the country will remain in place once he leaves Pennsylvania Avenue. Two eight-year Democratic presidencies over the last 30 years have not significantly impacted these issues. A stark racial wealth gap, school segregation, corrosive inequality, a climate crisis and a democratic deficit at the heart of America’s electoral college are but some of the issues that confront the new president.

With the Trump administration drawing to a close, we welcome the opportunity to refocus our journalism on the opportunities that lie ahead for America: the opportunity to fix a broken healthcare system, to restore the role of science in government, to repair global alliances, and to address the corrosive racial bias in our schools, criminal justice system and other institutions. We will report on the massive economic transition needed to stem climate change and we will continue to question the unchecked power of corporations and Big Tech.

But we can’t do this on our own. We need your support to carry on this essential work. We rely to an ever greater extent on our readers, both for the moral force to continue doing journalism at a time like this and for the financial strength to facilitate that reporting.

We believe every one of us deserves equal access to fact-based news and analysis. We’ve decided to keep Guardian journalism free for all readers, regardless of where they live or what they can afford to pay. This is made possible thanks to the support we receive from readers across America in all 50 states. If you can, support the Guardian from as little as $1 – and it only takes a minute. Thank you.