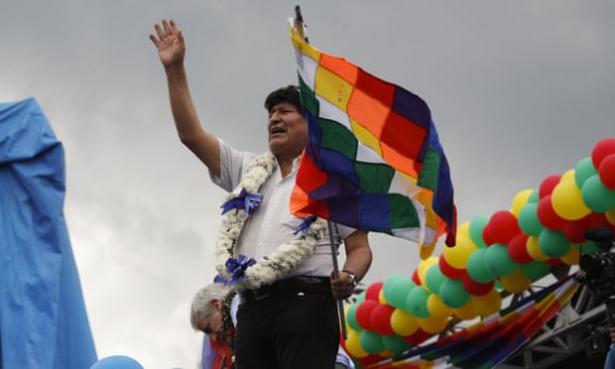 Tens of thousands of jubilant followers have welcomed Evo Morales back to the coca-growing region from which he fled into exile exactly one year ago after what they branded a racist rightwing coup.

“Evo, Evo, Evo,” chanted the people who had travelled from all over Bolivia to witness their leader’s triumphant return home in the jungle-flanked town of Chimoré.

Bolivia’s first indigenous president resigned and abandoned the South American country on 11 November 2019, making his escape on a Mexican air force jet that whisked him out of Chimoré’s airport.

But on Wednesday, two days after re-entering Bolivia at the start of an emotional, politically-charged homecoming, he made a gleeful return to the same town – to a rapturous reception.

In a highly symbolic move, tens of thousands of followers from across the country had gathered on the runway from which Morales took flight. 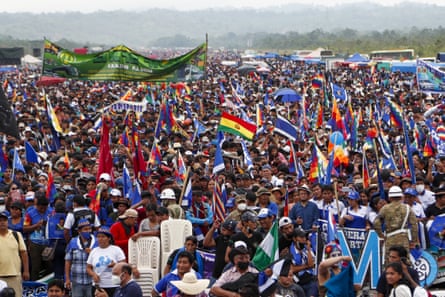 Supporters of Morales attend a rally to welcome him to Chimoré on 11 November. Photograph: Juan Karita/AP

Addressing them from a stage decked with green, yellow and red balloons, Morales declared: “We knew we were not alone. We knew we would return.”

Wreathed in white flowers and coca leaves, the former coca growers union leader thanked the crowd for its support during his year-long banishment, railed against the US and mocked Jeanine Áñez, the conservative senator who took power after he was forced from office.

Morales, 61, recalled how in January Áñez had urged the Bolivian people to stop “the savages” from regaining power.

“The Bolivian right and the global right should know: the savages are back in government,” he added sarcastically. “We’re in power now.”

Morales decision to return to Bolivia, just weeks after his party reclaimed the presidency in a re-run of last year’s election, has enraged opponents and unnerved some within his own party, the Movement For Socialism (Mas).

Bolivia’s new leftwing president, Luís Arce, has distanced himself from his predecessor and has not taken part in Morales’s caravan to Chapare province.

But Morales is still adored in many parts of the country for the social, economic and racial strides Bolivia made during his three terms in power. There have been scenes of joy this week as the exiled politician crossed Bolivia’s southern border with Argentina and headed north towards the jungle-covered Chapare region where he began his political career in the 1980s. 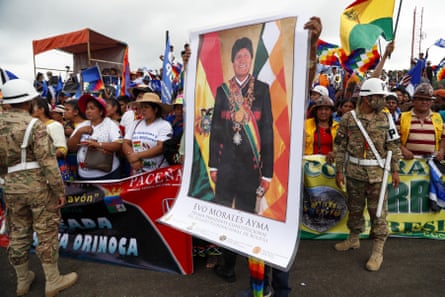 A supporter holds a poster of Morales during a rally to welcome him to Chimoré on 11 November. Photograph: STF/AP

Before Morales spoke in Chimoré, Justina Choque, 37, had fought her way to the front of the throng. She beamed in anticipation under wide-brimmed hat.

“We will never forget our president Evo. He identifies our roots. He represents the poor, the peasants, and this story will never be forgotten. He will always be our undisputed leader,” said Choque, a coordinator for the Mas party in Cochabamba.

“We have lived through massacres, with dead and wounded,” she said, recalling the shooting of unarmed civilians at the height of last year’s unrest. “But thanks to Luís Arce, we got back our country.”

Nearby, a group held up a banner commemorating Roberth Calisaya, 20, who was killed last year when soldiers opened fire on demonstrators in Santa Cruz.

“When [Evo] left, there was a dictatorship that persecuted our people,” said María Poma, whose sister was wounded in unrest.

“They showed no mercy to my sister, in spite of her being a woman, and they beat and tortured her as if she was a man.

“We want justice for all the victims. We want justice from that damn dictatorship we lived through,” said Mark Frauz, another family member. “It’s a joy for us that Evo has returned.”

Along the road north Morales was serenaded by brass bands and mobbed by devotees shouting words of support or clutching the multicoloured indigenous Wiphala flag that Morales made one of Bolivia’s national standards.

“The fight goes on,” the former cocalero activist proclaimed as his motorcade began its three-day journey back on Monday morning. On Tuesday the former union leader visited his childhood home in Orinoca wearing an Andean poncho.

Addressing the rally in Chimoré on Wednesday, Juan Carlos Huarachi, the head of the Bolivian Workers’ Centre, urged Morales’s champions to celebrate the return of “comrade Evo” and the defeat of the right.

“We did not surrender, carajo! We fought back … The people are responsible for this revolution,” Huarachi said.

“Comrade Evo isn’t just a domestic leader. He’s a Latin American leader and he’s a world leader,” he added. “Thanks to him we have our dignity. Thanks to him, comrades, we have recovered our identity.”

Tom Phillips is the Guardian's Latin America correspondent.  Dan Collyns is a British multimedia journalist based in Peru.