Trump Defeated - Four Takes: Black People Defeated Trump; We Win when we Follow Black Women; 10 Takeaways From the 2020 Election and the Future of Healthcare; California's Prop 15

The defeat of Donald Trump and the building of grass roots political independent. Reports from The Movement for Black Lives (M4BL); Showing Up for Racial Justice (SURJ); Labor Campaign for Single-Payer, California Calls 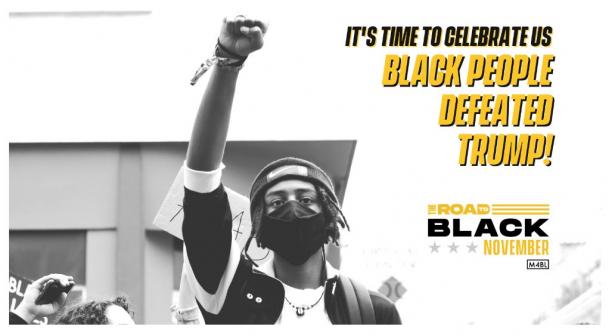 The Movement for Black Lives (M4BL),

Black People Defeated Trump (The Movement for Black Lives)
We Win when we Follow Black Women (Showing Up for Racial Justice - SURJ)
WTF Just Happened? 10 Takeaways From the 2020 Election and the Future of Healthcare (The Labor Campaign for Single-Payer)
California's Prop 15 (California Calls)

Black people showed up, and we won. From Philly to Atlanta to Detroit, Black people defeated Trump, and pushed back against white supremacy. We proved that the majority of people in this nation support our fight for Black lives and oppose hate, bigotry and indifference.

Black people moved through so much pain and heartbreak to get to today. We’ve lost over 235,000 people to COVID-19, including a disproportionate number of our family and loved ones. We lost millions of jobs when we already face a precarious economic situation every day due to racial capitalism. And lawmakers across the country did everything they could to stop us from organizing, voting and building power.

We won anyway. This is a testament to the power of Black people and Black organizing.

This win is also a testament to the power of Black women. Black cis and trans women and femmes are at the forefront of our movement. Black women rejected the white supremacist agenda and mobilized our communities to turn out and vote.

But our work is not done. We have always said: the fight for justice does not stop at the ballot box. We have our first Black woman Vice President alongside many new Black women, trans and non-binary leaders who were voted into office across the country. Now, our job will be to hold these leaders accountable to the people’s demands.

We have a vision for Black lives and a plan for the first 100 days of the new administration.

We will champion the BREATHE Act to divest from ineffective, racist policing and invest in our communities. We will dig in on local defund the police campaigns all over the U.S. We will double down on our commitment to be about ALL Black lives including trans, gender nonconforming and intersex people, disabled people and immigrants.

Keep Showing Up With Us:

We must make Black lives matter after elections, too. And we must hold politicians accountable to the Black people who put them into office. We’re not going anywhere — Black movement was here long before this election and will be here long after.

In power and solidarity,

The Movement for Black Lives

[The Movement for Black Lives (M4BL) formed in December of 2014, was created as a space for Black organizations across the country to debate and discuss the current political conditions, develop shared assessments of what political interventions were necessary in order to achieve key policy, cultural and political wins, convene organizational leadership in order to debate and co-create a shared movement wide strategy. Under the fundamental idea that we can achieve more together than we can separately.] 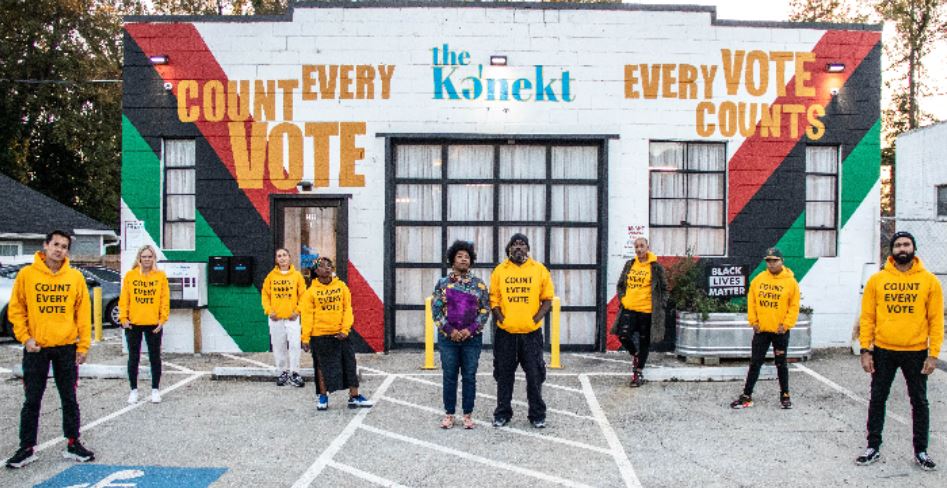 Today, we are all breathing a collective sigh of relief. The people of this country – led by communities of color – have voted out Donald Trump.

This win is a testament to the power of multi-racial grassroots organizing. These last four years we have again seen that People of Color, but most especially Black women, offer the vision, leadership, and organizing work to get all of us free.

I am so proud of how we showed up in this election. We knew white voters elected Trump and we took responsibility for organizing our own to get him out. We threw down in Georgia – a place the Democratic Party had written off and where Black women organizers have been leading the way. We joined partners on the ground in Georgia, including the New Georgia Project, Black Voters Matter, Fair Fight, Working Families Party, and so many other groups that had already laid the foundation to flip Georgia because of their tremendous ongoing work to expand the electorate with more Black voters while keeping real solutions to working people’s problems front and center.

SURJ made over a million calls to white voters who we knew were suffering under this administration and who are infrequent voters. Over 3,800 SURJ members had 36,000 conversations with voters and secured 21,200 commitments to vote.

And it worked. The New York Times is reporting that Biden made major gains in majority-white counties among white people who didn’t attend college. That's who we called.

This is what it looks like to organize our own – and to do it at scale and in service of a vision set by Black movement leaders.

When we build multi-racial coalitions and invest in long-haul organizing, we win, y’all! And let’s be clear: defeating Trump was a movement win, not a win for the Democratic establishment. Years of powerful Latinx organizing laid the groundwork for progressive wins in Arizona. Black leadership paved the way to defeat Trump in Georgia. Grassroots organizers across the country built the people power to send visionary progressive candidates to the halls of Congress.

We know the road ahead will not be easy. Our movement is going to have to fight hard against a Biden administration – and we’re up against an emboldened Right. More white people voted for Trump in 2020 than in 2016 and the Right will not let up for a single second. We’ve got our work to do to continue to organize more of our people away from white supremacy.

Today, we celebrate – and recommit to organizing alongside our partners for the long-haul.

We now know control of the Senate will be decided in Georgia on January 5th. Want to take action with us to help win? Sign up here and we’ll be in touch to put you to work after we’ve checked in with our partners and rested up

In solidarity and with hope,
Erin Heaney
SURJ Director

WTF Just Happened? 10 Takeaways From the 2020 Election and the Future of Healthcare (The Labor Campaign for Single-Payer)

The 2020 electoral rollercoaster ride is almost at an end. While it is still possible that the keys of the White House will have to be pried from Donald Trump's cold hands, it is all but certain that Joe Biden will become president on January 20, 2021. There is good reason to celebrate the triumph of democratic process and the peaceful transition of power under some very trying circumstances.

However, the post-election prospects for the Medicare for All movement are far less certain. Here are ten takeaways from this past year that might shed some light on the future of healthcare justice under a Biden Administration:

Where Do We Go From Here?

The world's most unequal, expensive and inefficient healthcare system is in crisis and Medicare for All is the only effective solution. Despite President-Elect Biden's stated opposition, Medicare for All enjoys broad public support and will continue to drive the political agenda. Now that the most important election of our lifetimes is over, labor and other social movements must embrace this support and help build momentum to overcome the power of the medical industrial complex and finally win the fight to make healthcare a right for everyone in America.

Join Us for the Medicare for All Virtual Strategy Conference January 23-24, 2021.

The path forward to healthcare justice is difficult and fraught with peril. We need to come together as a movement to gain strategic clarity and build unity. We don't have the luxury to wait until it is safe for all of us to travel again.  We need to be ready when the Biden Administration takes office.

This January, we will be co-hosting the first ever Medicare for All Virtual Strategy Conference with our allies, Healthcare Now. During the week of January 18, we will feature evening presentations and panels from leaders in the Medicare for All, social justice and racial equity movements. On the weekend of January 23-24, we will conduct a series of plenary discussions and dozens of workshops to address the burning issues of our movement. Registration information will be posted shortly. Please plan to join us. 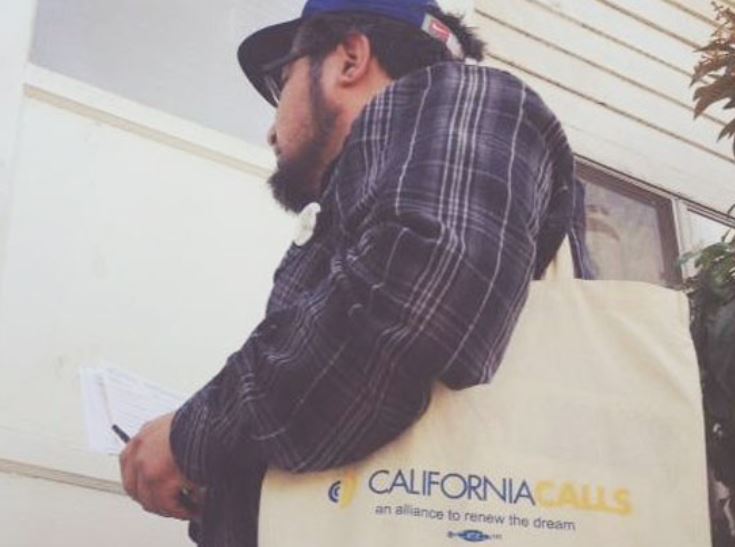 We always knew that Prop 15 was going to be a neck and neck, razor-thin race. Right now, we are still unable to call the final outcome. The good news is that we are only 400,000 votes behind, with 5 million more ballots still to be counted throughout the state.

It may be several more days before we know the results with full certainty.

BUT THIS MUCH WE DO KNOW:

We built the biggest, broadest and most powerful coalition of progressive social forces in recent history. Organized over nearly six years—with community-based, racial and social justice groups at the heart of it—we forged together an amazing array of diverse partners including labor union, civil rights, housing, health, education, and environmental groups, and elected leaders in a common quest for transformative change of California’s tax system to invest in our people and our future.

Together, we challenged the “third rail” of California politics that held Proposition 13’s special protections for multi-national corporations to be sacrosanct and untouchable. More than 1.7 million Californians signed our petition to place Prop 15 on the ballot—the largest number of signatures ever collected in California history. As official endorsements from the New York Times, the Los Angeles Times, the San Francisco Chronicle and the Sacramento Bee signaled, we demonstrated that even the mainstream had to agree the time for change was overdue.

We deployed the most sophisticated, coordinated, large-scale ground game in California history. California Calls served as the backbone for reaching young voters, new voters, low-income and people of color voters across the state, building upon 10 years of experimentation and field programs to authentically engage voters who often stay home. Pivoting from door-to-door to an entirely virtual phone and digital outreach program, the Million Voter Project trained more than 21,000 grassroots leaders and volunteers and reached over 1 million key voters in 2020—many of them several times. We believe they will pull us through—if not this time, certainly the next.

Our coalition demonstrated growing momentum for transformative solutions—not incremental ones—to address income inequality, racial justice, educational excellence, and economic opportunity for all. As our state continues to reel from the pandemic, recession and wildfires, we know that wealth and power must be redistributed. We know that the most vulnerable must be protected and have an equal voice in shaping their own destiny. We know that California’s future must be guided by the values of inclusion, justice and equity.

The Schools & Communities First campaign has expanded our vision and emboldened our confidence. It has lifted our spirits and unified us in the belief that together, fundamental change is possible.