As the coronavirus pandemic continues to threaten hard-hit minority communities, the nation’s largest association of doctors has passed a policy that recognizes racism as a public health threat. 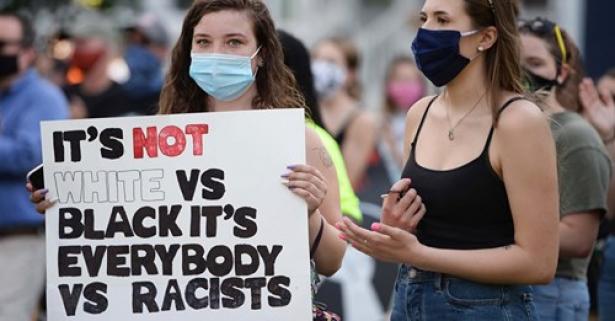 The new policy recognizes racism as a social determinant of health, and highlights the health disparities and lack of access to health care that have significantly hindered good health in Black and other historically marginalized communities in the U.S.

The American Medical Association’s House of Delegates – which includes 600-plus members from every medical specialty – released a statement last week that describes three tiers of racism detailed in the policy: systemic, cultural and interpersonal. Each poses specific barriers to quality medical care and good health and hinders the advancement of health equity, the group wrote.

Racism is a declared public health issue in 145 cities and counties across 27 states.Now what happens?

Baltimore-based board member Dr. Willarda Edwards chaired the AMA Task Force on Health Equity and lobbied for action that led to the creation of the AMA Center on Health Equity last year. She said the AMA's new policy is a continuation of those efforts – and the result of a confluence of racial unrest amid protests against police brutality and the pandemic.

“Essentially, with COVID, the Band-Aid was ripped off our health care system,” said Dr. Edwards, an internist. “And the disparities were so blatant as we see more Black and brown and Native American communities hard-hit by COVID. And we just said, ‘This has got to stop.’ We’ve got to be able to do something more than just talk about the stats.”

She’s referring to the disproportionate impact certain illnesses like heart disease and diabetes have on Black and Hispanic communities. But she's also talking about unconscious bias that has influenced medical treatment for minority patients.

“We have found that there has been a real evidence of disparity with respect to the way people of color are treated in the medical world,” she said, citing C-sections performed on minority women more than white women, and less pain medication prescribed for young minority men and women.

Last week, the AMA also officially recognized race as a social construct rather than a biological one, nodding to a vast net of socioeconomic factors that come along with it and impact health and well-being.

Dr. Otis Brawley, a renowned oncologist and professor of oncology and epidemiology at Johns Hopkins University, has been studying health disparities and treatments in Black people and minorities for three decades.

Perceiving race as a mere biological factor diminishes its far-reaching implications, he said.

“It takes the emphasis away from the fact that a substantial number of those people have poor outcomes because they either don’t get treatment or they have poor quality treatment,” Brawley said.

We're 'guinea pigs for the rich':Black Americans are the most hesitant to get a COVID-19 vaccine

“We need to get good care for Black people."

Ravi Perry, political science chair of HBCU Howard University, said the AMA’s announcement could be a significant catalyst in the progress of national racial dialogue and policy development to fight disparities.

"I think it has the potential to be a game changer – just like it was when homosexuality was ruled no longer a mental health disorder (by the American Psychological Association) ... that began a long trek to justice," he said.

Perry, a member of the American Lung Association’s COVID-19 Advisory Panel, has himself contracted COVID-19. He's signed up for clinical trials for the vaccine and lends his perspective on the panel about vaccine distribution among the minority communities he is a part of and studies, such as people with HIV.

“The fact that the scientific community has said that racism is in fact a public health matter – what that suggest is that this is no longer a grassroots political talking point,” he said. “It’s now a public policy matter backed up by scientific verification."

A state-by-state analysis found that in 32 states and the District of Columbia, black Americans are dying at disproportionate rates from COVID-19.