Dispatches From the Culture Wars - December 8, 2020 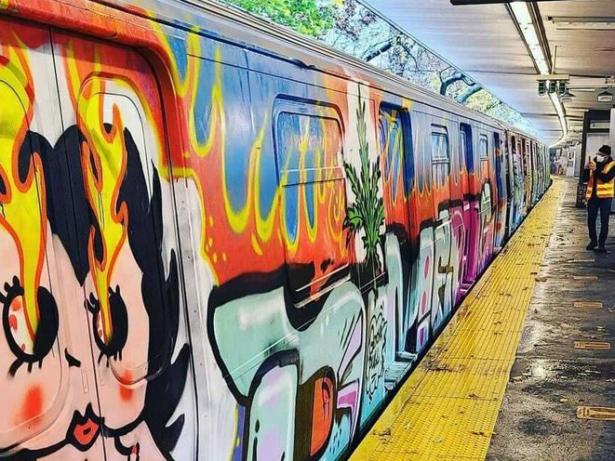 One of the tagged trains from the last weekend in November 2020. Credit , JOSE MARTINEZ/THE CITY

By Kim Kelly
The Baffler

Nearly a year into the pandemic and across every sector of essential work, it seems that employers have lost interest in lionizing the workers who have sacrificed so much for the sake of others.

Several elected officials chose to flout safety standards over the last few weeks of the pandemic. They know what the science says, and because they know, they’re able to convince themselves that they’re intelligent and savvy enough to safely flout the rules.

By Aaron Calvin
The Intercept

Advocating for simple, potentially lifesaving measures has become a politically significant act, working to inform the public means navigating conflicting regulatory bodies, and doing your job means making yourself publicly vulnerable to an endless stream of vitriol and even death threats.

Pope Francis is supporting demands for racial justice in the wake of the U.S. police killing of George Floyd and is blasting COVID-19 skeptics and media organizations that spread their conspiracies.

The U.S. has taken hits to its international reputation before. In the past four years, it’s taken a beating.

There is a growing trend in Canada towards increased tolerance for anti-China rhetoric. It is time for progressives to stand up for an independent foreign policy and against attempts to escalate a new Cold War.

Fostering a sense of victimhood – of an embattled silent majority under attack from a fanatical left – is integral to the modus operandi of right-wing populism.

Tear Down That Wall

President-elect Joe Biden’s pledge to halt construction is a start, but activists say tearing down the barrier is ultimately what's needed.

The Return of Subway Graffiti

By Jose Martinez
THE CITY

Subway taggers went on a weekend graffiti blitz, striking 24 cars on six lines — including an M train coated in “Alice in Wonderland”-like images of a white rabbit and a Mad Hatter.