Deb Haaland's Ability, Vision and Ancestry Would Make Her an Ideal Interior Secretary

The Native American congresswoman from New Mexico has worked across the aisle and is backed by environmentalists. 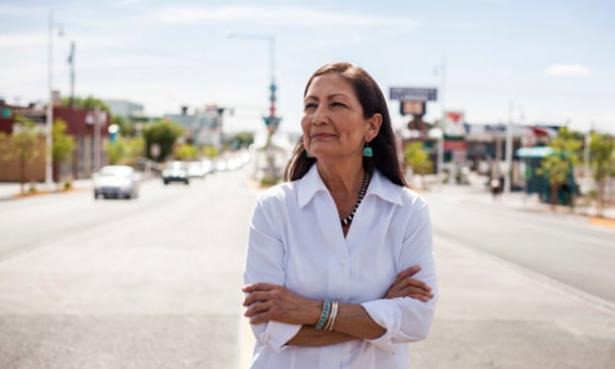 Deb Haaland. Who better to tell the oil boys that they no longer have control of the land than someone who can say it once belonged to her and her people., Juan Labreche/AP

Occasionally presidents have a chance to make choices that change the way we view things – one of those opportunities comes in the next few days, when Joe Biden is expected to name the next secretary of the interior.

The interior department dates back to 1849 and President Zachary Taylor. Largely forgotten now (in part because he died after 16 months in office), Taylor had first come to prominence fighting in the Black Hawk war, which led to the policy of “removing” Native Americans to the far side of the Mississippi, and then as a general in the Second Seminole war, where he fought the Battle of Lake Okeechobee. Over the years its secretaries have ranged from the corrupt (Albert Fall, of Teapot Dome fame) to the remarkable (Stewart Udall, who in the 1960s became the most persuasive champion of conservation the government ever had) to the unpleasant (James Watt, Reagan’s choice, who lost his job when he explained to a Chamber of Commerce gathering that one of his agencies boasted “a black, two Jews, and a cripple”).

But there’s one kind of American who’s never run the department, and that’s a descendant of the people who, well, once owned the interior. That could change – the New Mexico congresswoman Deb Haaland, one of the first two Native American women ever elected to the House, is considered a frontrunner for the job.

From the beginning, one duty of the department has been to handle “Indian affairs”, which is to say they have administered what’s usually been a gruesome set of policies. Haaland’s grandmother was taken away to boarding school when she was eight, as part of the process to break the chain of cultural connection that stretched back into the very ancient history of the Laguna Pueblo. Haaland – both of whose parents served in the military – was a single mother on food stamps; nonetheless she managed to graduate from law school, and she was soon chairwoman of the tribe’s development corporation, successfully overseeing its casinos and other businesses. She ran the state’s Democratic party before her election to Congress, where she has managed to make friends across lines of party, region and ideology – the Alaska Republican Don Young, longest-serving member of the House, called her a “consensus builder”, and according to the journalist Julian Brave NoiseCat, her House legislation has attracted more companion bills in the Senate than any other representative. She’s already served as vice-chair of the House committee on natural resources and chair of the subcommittee on national parks, forests, and public lands – she knows precisely what she’s getting into.

But she’s also beloved of environmentalists – the Sunrise Movement has offered an unstinting endorsement, and she’s introduced the 30 by 30 Act, which “sets a national goal of conserving at least 30% of the land and 30% of the ocean within the United States by 2030”. (Full disclosure – I’ve spoken at fundraisers in both her congressional campaigns.) She’s argued persuasively that the best route out of the coronavirus recession is to move swiftly to build out clean energy. “We need to listen to our planet and act now. While we do that, our country can reap the economic benefits of new industries and address economic inequality.”

What do progressives make of Joe Biden's cabinet picks so far?

Much of the next interior secretary’s role will be simply to clean up the mess left by Trump: after Ryan Zinke was caught up in a corruption investigation, he was replaced by the oil lobbyist David Bernhardt, who has been remarkably successful in rolling back environmental regulations – at the moment, he’s doing his best to sell off oil leases in the country’s largest wildlife refuge before Biden can take office.

And no matter who’s secretary, they will face controversy: Biden has promised to end all new fossil fuel drilling and mining on public lands, most of which fall under interior’s domain. That will go down hard in parts of the west – but who better to tell the oil boys that they no longer have control of the land than someone who can say it once belonged to her and her people?

In truth, if her competence and vision are the best reasons for giving her the job, her background comes next on the list. It would be a remarkable plot twist in the American story for an Indigenous person to run interior – a gesture can’t repair much of the damage that’s been done, but it can serve as a constant reminder of the debt still to be repaid. There’s never been a Native American cabinet member. For most of our history, sadly, it would have been an outlandish idea; now it feels absolutely necessary.

Bill McKibben is an author and Schumann Distinguished Scholar in environmental studies at Middlebury College, Vermont. His most recent book is Falter: Has the Human Game Begun to Play Itself Out?

... The Guardian has a small favour to ask. As we prepare for what promises to be a pivotal year for America, we’re asking you to consider a year-end gift to help fund our journalism.

Millions are flocking daily to the Guardian for open, independent, quality news that is funded by readers like you. Support from our readers has kept Guardian journalism free for everyone else, and has enabled the following:

We believe everyone deserves access to information that is grounded in science and truth, and analysis rooted in authority and integrity. That’s why we made a different choice: to keep our reporting open for all readers, regardless of where they live or what they can afford to pay. Powerful journalism drives change; this is some of the high-impact reporting that Guardian readers funded in 2020.

In these perilous times, an independent, global news organisation like the Guardian is essential. We have no shareholders or billionaire owner, meaning our journalism is free from commercial and political influence.

If there was ever a time to join us, it is now. Your funding powers our journalism. We’re asking readers to help us raise $1.25m to support our reporting in the new year. Every contribution, however big or small, will help us reach our goal. Make a gift now starting from as little as $1. Thank you.