Trump Is Guilty of Sedition and Must Be Brought to Justice

He’s violating his oath to protect the Constitution, and every day that he’s allowed to remain in power, the threat to our democracy grows. There are constitutional provisions to remove such a person from power. 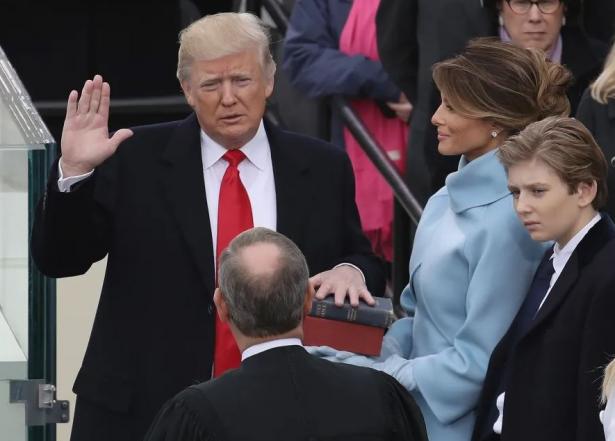 The Signal: Trump is now talking the sedition talk on a daily basis, and, one has to assume, actively planning ways to walk the sedition walk over the next month. He is meeting regularly with Sidney Powell, Steve Bannon and other plotters, and daily he is being fed a diet of ever more extreme scenarios for overturning the election results. This is no idle chatter, and even if we had once been inclined to dismiss it with words to the effect of “Oh, it’s only the crazy old guy blowing off steam,” we no longer have that luxury. In increasingly specific language, Trump and his band of traitors are advocating some combination of martial law, national emergency, and paramilitarism as a way to cling to power.

Witness: On Friday, Trump reportedly argued, to the dismay of many of his top officials, that he should appoint Sidney Powell (of “Hugo Chávez stole the US election” fame) as a special counsel to investigate election fraud. That was, apparently, too nuts an idea even for Rudy Giuliani to stomach; it was also a distraction from Giuliani’s own unfathomably outlandish plan to have the Department of Homeland Security step in and seize voting machines from the states, in a giant fishing expedition searching for fraud.

Meanwhile, Giuliani’s plan, despite being denounced as unconstitutional or unhinged or some combination of both by everyone from White House counsel Pat Cipollone to ex–national security adviser John Bolton, was apparently too moderate for another ex–national security adviser, Michael Flynn. Flynn was also at the Friday White House meeting, arguing in favor of declaring some form of martial law, which would involve sending the military into swing states Trump lost, forcing new elections, and, presumably, not resting until those new elections generated the “correct” result, one that ended up with Trump the winner.

And if anyone was tempted to give Trump the benefit of the doubt here—to argue that Trump himself wasn’t advocating martial law but was just giving an 11th-hour platform to an eccentric old friend—the president himself put that line of reasoning to rest on Saturday. Egged on by his trade adviser, Peter Navarro, who published a lengthy report on alleged fraud in the November 3 election, No. 45 went full-on paramilitarist. In a tweet that seemed half-fascist, half–teenager having just discovered a secret new house party, he informed his followers that “Peter Navarro releases 36-page report alleging election fraud ‘more than sufficient’ to swing victory to Trump. A great report by Peter. Statistically impossible to have lost the 2020 Election.” Trump continued, inviting his followers to descend on the nation’s capital to interrupt Congress’s certification of the Electoral College vote early in the new year. “Big protest in D.C. on January 6th. Be there, will be wild!”

“Wild!” indeed. A sitting president encouraging his violence-prone followers, including groups like the Proud Boys and conspiracists such as Alex Jones, who have pledged to keep Trump in office by whatever means necessary, to rise up against the constitutional process and the peaceful transfer of power.

At the same time, despite the Supreme Court’s latest decision on the election, and the fact that the Electoral College has already met and confirmed Biden’s win, the Trump campaign is, once again, appealing lower-court decisions on the election back up to the Supreme Court. On Sunday, the Trumpists filed yet another appeal, this time attempting to get Pennsylvania’s results overturned.

If I were a lawyer, I’d say that Trump is building a pretty good sedition case against himself, urging war against the institutions of American democracy and substituting loyalty to the person of Trump for loyalty to the country, the Constitution, and the institutions that he, and all of his government colleagues, have sworn an oath to protect.

But I’m not a lawyer, so I’ll just call it as I see it. Having lost the popular vote by 7 million, having lost the Electoral College vote too, and having failed at every level of the court system to get judges to intervene to squeeze a victory out of the bitter lemons of defeat, Trump is now grasping not only at one frivolous lawsuit after the other but at the straws of violence: specifically, military and paramilitary violence.

The people he is looking to for support in this attempted coup are, not surprisingly, the sewage of humanity—Powell, Flynn, Giuliani, the Proud Boys, Alex Jones. These are shameless con artists and thugs; people who lack any sense of morality or humility in the face of the popular will. They are, temperamentally, fascists, and like all fascists, they are entirely comfortable embracing the notion that the ends justify the means.

It is tempting to write them all off as a clown show, people too clumsy to even tie the laces of their jackboots correctly. And it’s true, there is more than an element of the comical to them. But even while we mock them and laugh, it is also important to keep in mind just how immensely dangerous these plotters are.

The United States is adrift. Its government has been reduced to puffery and fantasy to sustain the unstable ego of Donald J. Trump. There is no coordinated response to the massive computer hack of official agencies that was revealed last week. There is no sense of empathy from the administration for the thousands of people dying of Covid-19 on a daily basis.

That, this week of all weeks, the president’s inner circle was so distracted  by Trump’s efforts to overturn the results of a national election that it didn’t have the intellectual firepower left over to work on these problems says all that needs to be said about this administration’s priorities.

Remember the old saying: If it waddles like a duck and quacks like a duck, it’s almost certainly a duck. In this case, Trump is walking and talking like a fascist, and doing so while the country slides ever further into crisis. He’s gone beyond being a clear and present danger to the Constitution, and every day he’s allowed to remain in power, that danger grows.

There are constitutional provisions to remove such a person from power: He could be re-impeached by the House for his efforts to subvert the Constitution and immediately convicted by Mitch McConnell’s Senate; or he could be removed via the 25th Amendment. Both scenarios would be extraordinary with only four weeks to go until the inauguration; but as the Trump drumbeat to not abide by the peaceful transfer of power gets louder, so too does the need become ever more immediate to find ways to neuter Trump politically before he can do even worse, even more irreparable damage to American democracy.

Since McConnell and the rest of the GOP Senate leadership have finally admitted that Biden is the president-elect, it’s unconscionable that they are, at the same time, still standing silently by while Trump and his henchmen plot to unleash violence and mayhem against fellow Americans in their increasingly frantic efforts to keep The Donald in power.

[Sasha Abramsky, who writes regularly for The Nation, is the author of several books, including Inside Obama’s Brain, The American Way of Poverty, The House of 20,000 Books, Jumping at Shadows, and, most recently, Little Wonder: The Fabulous Story of Lottie Dod, the World’s First Female Sports Superstar. Subscribe to The Abramsky Report, a weekly, subscription-based political column, here.]