One of the most basic processes in all of nature—a subatomic particle’s transition between discrete energy states—is surprisingly complex and sometimes predictable, recent work shows 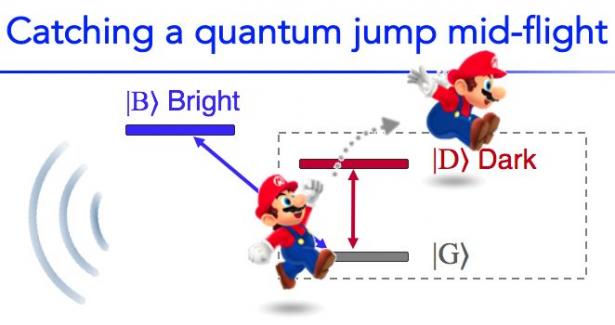 Quantum mechanics, the theory that describes the physics of the universe at very small scales, is notorious for defying common sense. Consider, for instance, the way that standard interpretations of the theory suggest change occurs in the quantum turf: shifts from one state to another supposedly happen unpredictably and instantaneously. Put another way, if events in our familiar world unfolded similarly to those within atoms, we would expect to routinely see batter becoming a fully baked cake without passing through any intermediate steps. Everyday experience, of course, tells us this is not the case, but for the less accessible microscopic realm, the true nature of such “quantum jumps” has been a major unsolved problem in physics.

In recent decades, however, technological advancements have allowed physicists to probe the issue more closely in carefully arranged laboratory settings. The most fundamental breakthrough arguably came in 1986, when researchers for the first time experimentally verified that quantum jumps are actual physical events that can be observed and studied. Ever since, steady technical progress has opened deeper vistas upon the mysterious phenomenon. Notably, an experiment published in 2019 overturned the traditional view of quantum jumps by demonstrating that they move predictably and gradually once they start—and can even be stopped midway.

That experiment, performed at Yale University, used a setup that let the researchers monitor the transitions with minimal intrusion. Each jump took place between two energy values of a superconducting qubit, a tiny circuit built to mimic the properties of atoms. The research team used measurements of “side activity” taking place in the circuit when the system had the lower energy. This is a bit like knowing which show is playing on a television in another room by only listening for certain key words. This indirect probe evaded one of the top concerns in quantum experiments—namely, how to avoid influencing the very system that one is observing. Known as “clicks” (from the sound that old Geiger counters made when detecting radioactivity), these measurements revealed an important property: jumps to the higher energy were always preceded by a halt in the “key words,” a pause in the side activity. This eventually permitted the team to predict the jumps’ unfolding and even to stop them at will.

Now a new theoretical study delves deeper into what can be said about the jumps and when. And it finds that this seemingly simple and fundamental phenomenon is actually quite complex.

CATCH ME IF YOU CAN

The new study, published in Physical Review Research, models the step-by-step, cradle-to-grave evolution of quantum jumps—from the initial lower-energy state of the system, known as the ground state, then a second one where it has higher energy, called the excited state, and finally the transition back to the ground state. This modeling shows that the predictable, “catchable” quantum jumps must have a noncatchable counterpart, says author Kyrylo Snizhko, a postdoctoral researcher now at Karlsruhe Institute of Technology in Germany, who was formerly at the Weizmann Institute of Science in Israel, where the study was performed.

Specifically, by “noncatchable” the researchers mean that the jump back to the ground state will not always be smooth and predictable. Instead the study’s results show that such an event’s evolution depends on how “connected” the measuring device is to the system (another peculiarity of the quantum realm, which, in this case, relates to the timescale of the measurements, compared with that of the transitions). The connection can be weak, in which case a quantum jump can also be predictable through the pause in clicks from the qubit’s side activity, in the way used by the Yale experiment.

The system transitions by passing through a mixture of the excited state and ground state, a quantum phenomenon known as superposition. But sometimes, when the connection exceeds a certain threshold, this superposition will shift toward a specific value of the mixture and tend to stay at that state until it moves to the ground unannounced. In that special case, “this probabilistic quantum jump cannot be predicted and reversed midflight,” explains Parveen Kumar, a postdoctoral researcher at the Weizmann Institute and co-author of the most recent study. In other words, even jumps for which timing was initially predictable would be followed by inherently unpredictable ones.

But there is yet more nuance when examining the originally catchable jumps. Snizhko says that even these possess an unpredictable element. A catchable quantum jump will always proceed on a “trajectory” through the superposition of the excited and ground states, but there can be no guarantee that the jump will ever finish. “At each point in the trajectory, there is a probability that the jump continues and a probability that it is projected back to the ground state,” Snizhko says. “So the jump may start happening and then abruptly get canceled. The trajectory is totally deterministic—but whether the system will complete the trajectory or not is unpredictable.”

This behavior appeared in the Yale experiment’s results. The scientists behind that work called such catchable jumps “islands of predictability in a sea of uncertainty.” Ricardo Gutiérrez-Jáuregui, a postdoctoral researcher at Columbia University and one of the authors of the corresponding study, notes that “the beauty of that work was to show that in the absence of clicks, the system followed a predetermined path to reach the excited state in a short but nonzero time. The device, however, still has a chance to ‘click’ as the system transitions through this path, thus interrupting its transition.”

Zlatko Minev, a researcher at the IBM Thomas J. Watson Research Center and lead author of the earlier Yale study, notes that the new theoretical paper “derives a very nice, simple model and explanation of the quantum jump phenomenon in the context of a qubit as a function of the parameters of the experiment.” Taken together with the experiment at Yale, the results “show that there is more to the story of discreteness, randomness and predictability in quantum mechanics than commonly thought.” Specifically, the surprisingly nuanced behavior of quantum jumps—the way a leap from the ground state to the excited state can be foretold—suggests a degree of predictability inherent to the quantum world that has never before been observed. Some would even consider it forbidden, had it not already been validated by experiment. When Minev first discussed the possibility of predictable quantum jumps with others in his group, a colleague responded by shouting back, “If this is true, then quantum physics is broken!”

“In the end, our experiment worked, and from it one can infer that quantum jumps are random and discrete,” Minev says. “Yet on a finer timescale, their evolution is coherent and continuous. These two seemingly opposed viewpoints coexist.”

As to whether such processes can apply to the material world at large—for instance, to atoms outside a quantum lab—Kumar is undecided, in large part because of how carefully specific the study’s conditions were. “It would be interesting to generalize our results,” he says. If the results turn out similar for different measurement setups, then this behavior—events that are in some sense both random and predictable, discrete yet continuous—could reflect more general properties of the quantum world.

Meanwhile the predictions of the study could get checked soon. According to Serge Rosenblum, a researcher at the Weizmann Institute who did not participate in either study, these effects can be observed with today’s state-of-the-art superconducting quantum systems and are high on the list of experiments for the institute’s new qubits lab. “It was quite amazing to me that a deceptively simple system such as a single qubit can still hide such surprises when we measure it,” he adds.

For a long time, quantum jumps—the most basic processes underlying everything in nature—were considered nearly impossible to probe. But technological progress is changing that. Kater Murch, an associate professor at Washington University in St. Louis, who did not participate in the two studies, remarks, “I like how the Yale experiment seems to have motivated this theory paper, which is uncovering new aspects of a physics problem that has been studied for decades. In my mind, experiments really help drive the ways that theorists think about things, and this leads to new discoveries.”

The mystery might not just be going away, though. As Snizhko says, “I do not think that the quantum jumps problem will be resolved completely any time soon; it is too deeply ingrained in quantum theory. But by playing with different measurements and jumps, we might stumble upon something practically useful.”

Scientific American Space & Physics. Discover the latest in particle physics, astronomy, cosmology and more as you journey through space and time in each issue.

For $19.99 per year, your subscription includes six bi-monthly digital issues and every digital Space & Physics issue ever published!

You can cancel your subscription at anytime! Please see our FAQs or contact customer service at help@sciam.com for more information.