When white-supremacists resort to terrorist violence, disciplined and strategic self-defense is not only justified — it's required. The federal government has the means and the resources to protect people from white-supremacist terrorism... 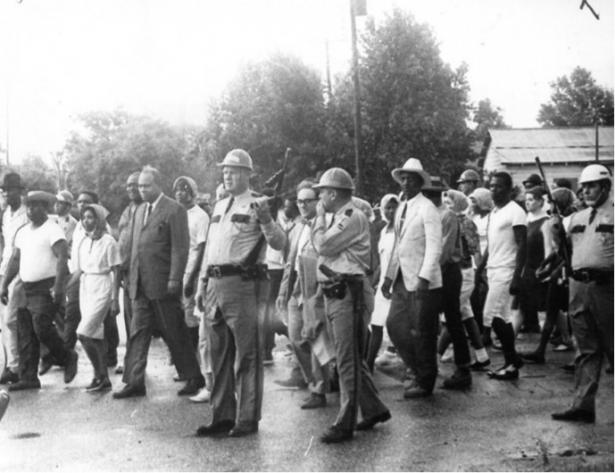 As I watch images of violent white-supremacist mobs in the streets and armed Trumpites threatening to lynch election officials, I'm reminded of the lessons that we of the 1960s Freedom Movement learned from the Bogalusa struggle in 1965.

Back then, Bogalusa Louisiana (pop 23,000) was still a thoroughly-segregated company town in open defiance of the Civil Rights Act that we had forced through Congress the year before. Cops and Klan were joined at the hip, working together to enforce segregation and white-supremacy with jail, clubs, mob violence, and gunfire. By day, nonviolent pickets and sit-ins were mobbed, beaten, attacked by police dogs, and arrested, at night shotgun-toting KKK nightriders threatened the Black community.

Operating in tight strategic alliance with CORE's nonviolent organizers and protesters, the armed Deacons for Defense protected both the Black community and Bogalusa's interracial group of civil rights workers. Led by Charles Sims, they provided armed guards for the mass meetings at the union hall, escorts for CORE cars on rural roads, riflemen to protect Black and white activists at night, and roving security patrols to protect the Afro-American neighborhoods.

Louisiana Governor McKiethan tried to use state troopers to disarm the Deacons — he failed. FBI Director J. Edgar Hoover considered the Deacons to be a "national threat." While the Klan and corrupt cops were running wild in Bogalusa, Bureau agents were busy compiling 1500 pages of reports on the Deacons. He also failed to suppress them.

Strategy and carefully thought-out tactics governed the Deacon's actions — not bombast, posturing, or limelight-seeking. Knowing that they could never prevail against a militarized police-state, they avoided armed battle with the cops and troopers. When nonviolent demonstrators — mostly women and teenagers — were assaulted by Klansmen with fists and boots while the local cops smiled in approval, the Deacons held themselves in check, but when the Klan resorted to knives, ax-handles, firebombs, and guns, the Deacons responded with just enough force to prevent mayhem.

The federal government in DC was controlled by Democrats who prioritized retaining the support of white voters over protecting Black lives, defending civil liberties, and upholding the Constitution. They wrung their hands and made pious statements about civil rights issues but took little effective action — except when forced to do so by public pressure mobilized by the Freedom Movement. Freedom Riders, for example, had to brave savage mob violence and endure the brutality of Parchman Prison to push Kennedy into enforcing existing federal laws regarding inter-state travel. Similarly, Washington did little to punish those who murdered or assaulted Black civil rights workers — except in high profile cases backed by mass outcry such as the lynching of the three Freedom Summer activists (two of whom were white).

The police-KKK reign of terror in Bogalusa continued for six months. Finally, at long last, John Doar of the Department of Justice (DoJ) managed to somehow convince LBJ that it was time to crack down on Klan terrorism and police repression — and to stop cowering in political fear of the "white-backlash." President Johnson ordered Hoover to swarm the little town with over 100 agents, this time targeting both badge-wearing and hood-wearing racists. The DoJ moved against Klansmen and criminal cops with arrests on minor charges and the threat of fines. As soon as they realized that they might face sanctions on their behavior they folded like the cowards that at heart they really were.

Overnight, Washington crushed the white supremacist coup in Bogalusa and forced local authorities to uphold the law. In retrospect, what is remarkable was how little was required to destroy the Klan and force local authorities to protect citizens' rights and liberties. The federal government did nothing more than threaten city officials with modest fines and light jail sentences — Robert Hicks.

The federal show of force was both welcome and effective, but for many in the Freedom Movement it was flavored with bitterness over all the past jailings, beatings, bombings, and lynchings across the South that might have been prevented had politicians in Washington cared as much about Black lives and the Constitution as they did for white votes. For all those years, it wasn't federal inability to stop terrorism and police repression, it was lack of political will.

So what were the "Bogalusa Lessons?"

First, that when white-supremacists resort to terrorist violence, disciplined and strategic self-defense is not only justified — it's required.

Second, that the federal government has both the means and the resources to uphold the Constitution, protect people from white-supremacist terrorism, and sanction police abuse — when they have the political will to do so. But the source of that political will is mass public pressure and constant vigilance.

See Confronting the Klan in Bogalusa With Nonviolence & Self-Defense for more information on the Bogalusa Movement.

From 1963-1967, Bruce Hartford was a Civil Rights Worker with CORE in California and then in Alabama and Mississippi on the staff of Dr. King's organization the SCLC. Later he was a student activist at San Francisco State College, then a freelance journalist covering the Vietnam War, and then an ILWU chief shop steward in the 1970s. He was a founding member and long-time officer of the National Writers Union in the '80s and '90s. Today he is webmaster of the Civil Rights Movement Archive (crmvet.org), on the board of the SNCC Legacy Project, and a local leader of an Indivisible chapter. He is author of, "The March on Washington for Jobs and Freedom" (2012), "The Selma Voting Rights Struggle & the March to Montgomery" (2014), "Voting Rights in America -- Two Centuries of Struggle" (2018), and "'Troublemaker' Memories of the Freedom Movement" (2019).
Copyright © Bruce Hartford, 2020
Thanks to the author for submitting this article to Portside.