As he prepared to march through Kenosha, Justin Blake had his own message: “We do not want you to leave here not fully understanding that the Blake family, one day, will get justice.” 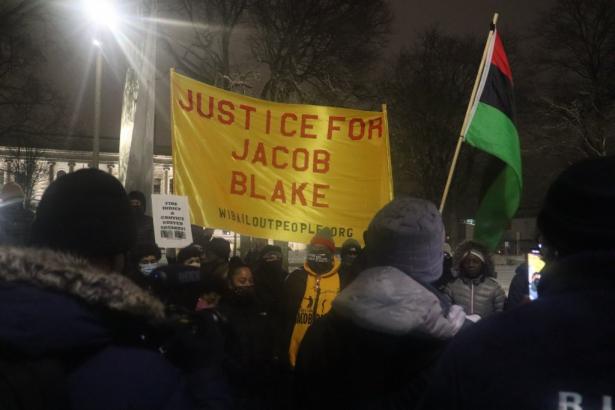 Protesters gather in Kenosha on Jan 4, leading up to the Blake decision., Isiah Holmes

For the family of Jacob Blake, the pursuit of justice will not end with the district attorney’s decision not to charge the officer who shot Blake in the back, during an interaction in August, 2020. “It’s a new day,” Justin Blake, Jacob’s uncle, reassured a crowd of press and supporters on the eve of the announcement on Jan 5 that there would be no charges in the case. “It’s 2021, not 2020. In 2020 we learned a lot. We were able to really analyze a lot and see where we stood. 2021 is the year that we tell the truth and get everybody to stand up and make some noise.”

On Aug. 23, 2020, Kenosha officers were called to a residence for after a report of “family trouble.” A dispatcher said a woman called for police and said, “Jacob Blake isn’t supposed to be there and he took the complainant’s keys and is refusing to give them back.” After officers arrived, video of the incident captured Blake walking down the sidewalk toward his vehicle followed by officers who had  drawn their guns. 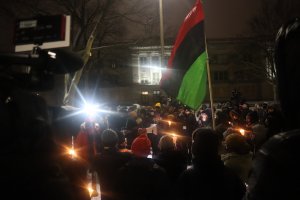 Protesters and the family of Jacob Blake hold a candle light vigil in Kenosha on Jan. 4, 2021. (Photo by Isiah Holmes)

Officer Rusten Sheskey shot Blake at close range as he began to climb into the driver’s seat of the car, while his sons sat in the back seat. Seven gun shots can be heard on the video, which soon went viral. Although investigators have stated that a knife was found on the floor of the vehicle, it’s yet to be confirmed whether Blake was wielding it when he was shot. Blake survived the shooting, but was left paralyzed from the waist down and is undergoing therapy.

The Blake shooting was investigated by the Wisconsin Department of Justice’s Division of Criminal Investigations (DCI). Rusten has also stated he feared Blake was attempting to kidnap the children. Blake’s family firmly rejects that narrative.

“Whatever they thought Jacob did,” says Vaun Mayes, a community organizer from Milwaukee, “there’s a process for that. You go to jail, you go to court, and then we see what happens. We don’t even get to make it to the jail … we don’t even make it to the process. That’s what we’re talking about.” The Blake family has called for Officer Sheskey to be fired and they had wanted him to be charged in the shooting — a hope that faded on Tuesday. But they say the fight goes beyond their specific case.

“We know about patience,” Justin Blake said, noting his family’s generational involvement in civil rights issues over the decades. “One thing we’re not going to do is allow the United States of America, one of the richest countries in the world, to virtually jail each and every African decedent that looks like little Jake. Because if they get away with this, saying that this gentleman was just trying to prevent the children from being kidnapped, then that means  that it’s an open run on all African Americans around this country.” 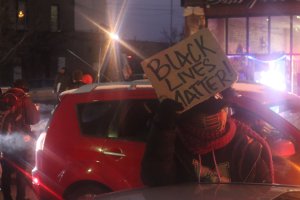 Protesters take to the streets on Jan. 4 in Kenosha. (Photo by Isiah Holmes)

The family and a network of organizers around them are prepared to continue pushing and marching in the streets. After their press conference on Monday night, the Blakes led a march through the damp, 28 degree evening through the streets towards Civic Park. In August, the park was the site of clashes between Black Lives Matter protesters and militarized law enforcement as well as armed right-wing militias — including 18-year-old Kyle Rittenhouse, who entered a not-guilty plea in a hearing held just before the charging announcement in Kenosha on Tuesday.

The trauma from the Blake shooting and aftermath which left two dead, one maimed, and millions of dollars in property damage, fueled the city’s preparations for a potential backlash when the charging decision was announced on Tuesday.

Kenosha’s Common Council held a meeting on its recently issued emergency declaration order on Jan. 4. During the meeting, fines for violating the curfew and emergency order were raised to over $1,300 from the $200 that was in effect in August. Mayor Jon Antaramian was also granted a “declaration of authority” during the order, giving him the power to issue a curfew. “It’s my intention to always make sure that I keep the city out of trouble in the way we handle these projects,” said Antaramian.

The order will remain valid for eight days after Tuesday’s announcement. Meanwhile, Gov. Tony Evers mobilized the National Guard. “We are continuing to work with our local partners in the Kenosha area to ensure they have the state support they need, just as we have in the past,” said Evers. “Our members of the National Guard will be on hand to support local first responders, ensure Kenoshans are able to assemble safely, and to protect critical infrastructure as necessary.”

The city of Kenosha had begun preparing for Tuesday’s announcement weeks ahead of time. Businesses boarded up early, and the same black metal fence which surrounded the courthouse in August returned. On Monday evening, during the Blakes’ march on Jan. 4 there were no National Guard or police in sight. The only visible law enforcement presence was a single marked Kenosha police SUV, which shadowed the protest on the side streets. 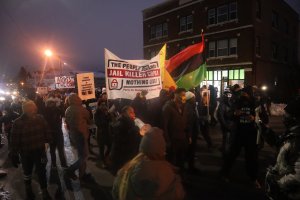 Protesters take to the streets on Jan. 4 in Kenosha. (Photo by Isiah Holmes)

As part of the emergency declaration, specific zones for protest have been established. During the last curfew, there was criticism that enforcement of the curfew appeared selective and didn’t adequately protect First Amendment rights. The American Civil Liberties Union (ACLU) of Wisconsin issued a statement reminding  the city of its  mistakes in August 2020.

“Kenosha’s leaders have an important chance before them now,” said Chris Ott, executive director of the ACLU of Wisconsin, “to avoid repeating mistakes made last summer, when a heavy-handed response by law enforcement made the situation worse and violated the rights of those speaking up for justice.” The ACLU had numerous legal observers on the ground during those nights.

In the wake of the charging decision, said Ott, “peaceful protesters must be allowed to make their voices heard without fear of being harassed, assaulted or mistreated by the officers who are charged with protecting them. We hope that the Common Council recognizes Kenosha’s deeply flawed response to past protests and works to develop an approach that respects people’s constitutional rights while also prioritizing de-escalation and equitable policing.”

As he prepared to march through Kenosha, Justin Blake had his own message: “We do not want you to leave here not fully understanding that the Blake family, one day, will get justice.”

Isiah Holmes is a journalist and videographer, and a lifelong resident of Milwaukee, Wisconsin. Holmes' video work dates back to his high school days at Wauwatosa East High, when he made a documentary about the local police department. Since then, his writing has been featured in Urban Milwaukee, Isthmus, Milwaukee Stories, Milwaukee Neighborhood News Services, Pontiac Tribune, and other outlets.

The Wisconsin Examiner is a nonpartisan, nonprofit news site offering a fresh perspective on politics and policy in our state.

In Wisconsin’s great progressive tradition, we aim to hold the powerful accountable to the people, follow the money, and dig out the truth. Although we give you the inside scoop, we are not a publication for “insiders.” Instead, we cover stories and voices that too often go unheard. We don’t accept advertising or sell subscriptions. Instead, we rely on the generous support of foundations and people like you, who care about Wisconsin and believe an informed public is crucial to a healthy democracy.

We take our inspiration from the motto emblazoned on a ceiling in our state Capitol: “The Will of the People Is the Law of the Land.”  The Examiner is part of States Newsroom, a national 501(c)(3) nonprofit supported by grants and a coalition of donors and readers. We retain full editorial independence.