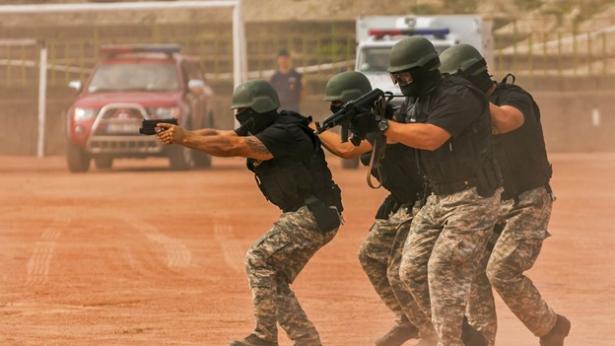 Most Americans are probably unaware that police departments across the country have access to grenade launchers, drones, armored vehicles, and other military-grade equipment. But they do, thanks to an obscure federal policy allowing the military to transfer surplus equipment to law enforcement.

The policy itself is known as the “1033 Program.” First created by Congress more than 30 years ago, it allowed for the transfer of military equipment to the police for use in the War on Drugs. Eventually, lawmakers expanded the policy to encompass essentially all law enforcement purposes.

According to the Department of Defense, roughly 8,200 law enforcement agencies across the country participate in the program. In total, the military has transferred more than $7.4 billion worth of equipment to local police departments.

In 2015, the Obama administration put modest limitations on the kind of equipment that could be transferred via the 1033 Program. However, USA Today explains, the Department of Justice rolled back these restrictions in 2017, restoring the status quo.

Looking at more recent data, Yahoo News reports that some of the equipment transferred in 2019 was non-controversial, like standard vehicles and day-to-day supplies. But it notes that other equipment included grenade launchers, “Mine-Resistant Ambush Protected (MRAP) vehicles designed to withstand Improvised Explosive Devices (IEDs) in war zones,” and military-grade drones that cost up to $22 million.

In sum, there’s no disputing the fact that our policies have militarized the police. The only debate is whether giving police officers, who undoubtedly have a dangerous job, military equipment actually improves public safety as proponents insist.

A new peer-reviewed study concludes this just isn’t so.

Researchers from Louisiana State University and Emory University examined data from the 1033 Program’s record and found no evidence that it reduced crime in any meaningful way. It debunks past studies that purported to show such an effect and explains why those data were faulty.

“The most important thing for policy makers and the public to know is that you can’t justify giving surplus military equipment to police departments on the grounds it will lead to a reduction in crime,” Emory Professor Tom Clark said. “There is no evidence for that.”

Not only is there ample evidence that this kind of equipment fails to protect public safety, there’s further proof that it fails to protect police officers. According to a study of 9,000 law enforcement agencies in the US, this equipment has had no bearing on the number of officers killed or harmed in the line of duty.

Most concerning of all, other evidence shows that the militarization of police has led to worsening relationships between citizens and officers. It has caused a change in the mentality of how police view the citizens they serve and led to an increased use of weapons of war against Americans.

Republican Senator Rand Paul and Democratic Senator Brian Schatz have introduced a bill to do exactly that. It would allow for the transfer of normal supplies and defensive gear, but stop the transfer of offensive equipment like drones and armored vehicles. It would also create a new system of transparency for the 1033 Program and other similar initiatives, requiring transfers to be publicly listed.

“For years, I have fought to stop the federal militarization of local police departments,” Paul said in June. “I support our officers, but I do not believe it is beneficial for neighborhoods across the United States to have the same kind of military-grade weapons that are commonly used in Afghanistan.”

With momentum growing after the May death of George Floyd and other instances of alleged police brutality, common-sense criminal justice reform may finally have a chance in the coming years. Ending police militarization programs that don’t increase public safety would be a great place to start.

Brad Polumbo (@Brad_Polumbo) is a libertarian-conservative journalist and Opinion Editor at the Foundation for Economic Education.