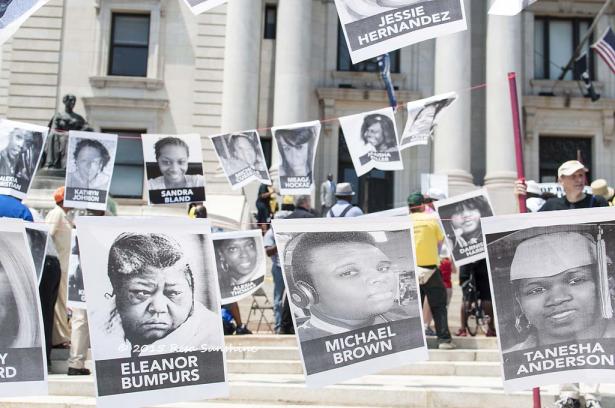 The dehumanization of people of African descent — a practice rooted in false social constructions of race created to justify enslavement, pervasive racial stereotypes and widely accepted harmful practices and traditions — has sustained and cultivated a tolerance for racial discrimination, inequality and violence, which continues to have a disproportionate impact on the enjoyment of their human rights.

“Systemic racism needs a systemic response,” Bachelet wrote. “States should adopt a systemic approach to combating racial discrimination through the adoption and monitoring of whole-of-government and whole-of-society responses.” They should be designed “to dismantle systemic racism.”

Hailing the report as “a victory,” the U.S. Human Rights Network (USHRN) issued a statement saying it “reflects the efforts of civil society to educate UN officials about human rights violations and the peoples’ solutions … even convening a peoples’ commission of inquiry to take on what the UN declined to do last year.”

After the killing of George Floyd and subsequent mass protests, the USHRN and the ACLU organized an international coalition that urged the HRC to establish a commission of inquiry to investigate systemic racism and police violence against people of African descent in the United States. Instead, on June 19, 2020, after intensive lobbying by the Trump administration, the HRC adopted resolution 43/1, directing the High Commissioner to prepare a report on police violence and other human rights violations against Africans and people of African descent around the world (not limited to the United States).

Thus, the International Association of Democratic Lawyers, National Conference of Black Lawyers and National Lawyers Guild established their own International Commission of Inquiry on Systemic Racist Police Violence Against People of African Descent in the United States. The commission issued its report on April 15, 2021. I served as one of four rapporteurs who assisted the 12 commissioners in drafting our 188-page report, which Bachelet cited in her report and conference room paper.

“The worldwide mobilization of people calling for racial justice has forced a long-delayed reckoning with racism and shifted debates towards a focus on the systemic nature of racism and the institutions that perpetrate it,” Bachelet wrote.

Bachelet cited a 2021 University of Chicago study, which found that use of force legislation and directives in the largest cities of the 29 wealthiest countries often did not comply with international human rights law.

Discriminatory identity checks and stops-and-searches are attributable to racial profiling, according to Bachelet, and she condemns disproportionate stops, arrests and imprisonment for drug-related offenses.

Bachelet’s analysis of 190 cases globally (most from the United States) revealed that at least 85 percent of police-related deaths could be attributed to: (1) policing of minor offenses, traffic stops and stops-and-searches (such as the case of George Floyd); (2) intervention of police as first responders to mental health crises; and (3) special police operations (like the case of Breonna Taylor). Many of the victims did not pose an imminent threat of death or serious injury to justify lethal force under international legal standards.

Citing our commission report, Bachelet decries the militarization of law enforcement, including the deployment of military personnel and equipment, which often leads to “a rapid escalation in the use of force” particularly “in the context of the war on drugs.”

She also cites our commission report’s analysis that the lack of clarity in use-of-force laws about obligations under international human rights law increases the risk of violations and poses an impediment to accountability.

Challenges to holding police officers accountable for violating the human rights of people of African descent detailed by Bachelet include: (1) the absence of independent accountability mechanisms and deficient investigations; (2) prosecutorial discretion and reluctance to file charges against police; (3) “qualified immunity;” and police unions (citing our commission report’s discussion of these issues).

As did our commission report, Bachelet cited a 2021 University of Chicago study, which found that use of force legislation and directives in the largest cities of the 29 wealthiest countries often did not comply with international human rights law.

A Transformative Agenda With Calls for Reparatory Justice

“[N]o State has comprehensively accounted for the past or for the current impact of systemic racism,” Bachelet notes. “Structures and systems that were designed and shaped by enslavement, colonialism and successive racially discriminatory policies and systems must be transformed.”

“A comprehensive approach to repair the legacies of the past must be grounded in an intersectional and intergenerational analysis of the impacts of enslavement, the transatlantic trade in enslaved Africans, colonialism and successive racially discriminatory policies and systems,” Bachelet writes. “These impacts should be recognized, acknowledged and redressed.”

The transformative agenda in the report’s annex includes: “Dismantle structures and systems designed and shaped by enslavement, colonialism and successive racially discriminatory policies and systems.”

Additionally, the annex states: “Reimagine policing and the criminal justice system by supporting and implementing community-driven models for dignity and collective safety that protect and serve all members of communities without discrimination.”

Collette Flanagan, founder and CEO of Mothers Against Police Brutality, who testified in the commission’s hearings, said, “The release of the U.N. High Commissioner’s report is not only historic, but hopefully it will be a beacon of light for other countries to unite and stand against the egregious extrajudicial killings at the hands of U.S. law enforcement; holding the United States accountable for their shameful police brutality history.”

Jamil Dakwar, director of the ACLU’s Human Rights Program, also responded to Bachelet’s report, stating, “This historic report provides a blueprint for the United States and other countries to begin reckoning with the long history of systemic racism that permeates through policing and other state violence and structural discrimination against Black people. We welcome this report and urge the Biden administration and Congress to heed the recommendations and take bold action to eliminate systemic racism in the United States, starting with our policing institutions.”

“Reparatory justice requires a multipronged approach that is grounded in international human rights law,” Bachelet writes. “Reparations are one element of accountability and redress. For every violation, there should be repair of the harms caused through adequate, effective and prompt reparation.” She notes that reparations are not limited to monetary compensation but also include formal apologies, memorialization, institutional and educational reforms, and acknowledgement of the legal responsibility of the State for violations “linked to truth, justice and guarantees of non-recurrence.”

[Marjorie Cohn is professor emerita at Thomas Jefferson School of Law, former president of the National Lawyers Guild, and a member of the bureau of the International Association of Democratic Lawyers and the advisory board of Veterans for Peace. Her books include Drones and Targeted Killing: Legal, Moral, and Geopolitical Issues. ]