How to Fight Climate Change and Fascists at the Same Time

Democracy reform is the first step toward a sustainable future. 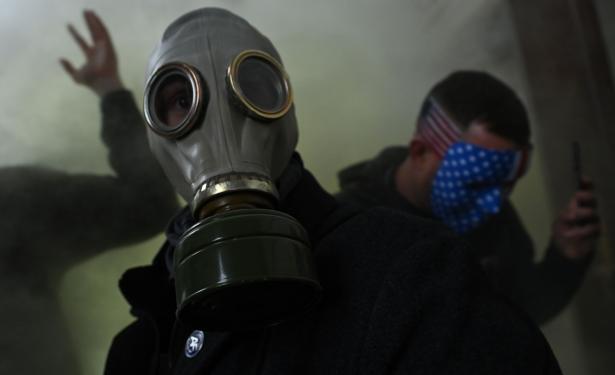 Politicians in the United States have long had a single, instinctive response to crises both real and imagined: make new kinds of cops. After 9/11, the Bush administration created the Department of Homeland Security. Amid a ginned-up border crisis two years later, it created the Immigration and Customs Enforcement. Now, after last week’s raid on the Capitol, President-elect Joe Biden is being pushed to create a Cabinet-level appointee tasked with fighting domestic terrorism, bolstered by the bold new statutes criminalizing it that he’s promised. That’s despite the fact that there’s a much better way to defang the violent far right and countless other crises boiling in our teetering republic. The best way to contain the militant GOP, while helping the U.S. face global warming and more, is to expand democracy—not the national security state.

The people who stormed the Capitol last week and the politicians who incited them should be held accountable, a process begun by yesterday’s impeachment vote. But we already have laws for dealing with domestic terrorism. The relevant agencies just haven’t wanted to enforce them, preferring almost always to target either whole categories of people—predominantly, nonwhite people—and forms of small-d democratic dissent like nonviolent protests. Anti-pipeline protesters, for instance, have found themselves on the losing end of a rash of new legislation making sit-ins and other peaceful disruptions to “critical infrastructure” a felony. New counterterrorism measures may be framed as protecting democracy, but more often they constrain it.

White nationalist thugs feel empowered in American society for much the same reason that passing comprehensive climate policy feels like an endless uphill battle: Our electoral system was never meant to govern a majoritarian, multiracial democracy. The Founding Fathers’ fears of democracy leading to mob rule spawned a number of undemocratic institutions—from the Electoral College to the Senate itself, which grossly overrepresents white, rural voters over the 63 percent of the population that lives in cities. Exemplified by the election victories of a Black man and a Jew in Georgia, the last few months have unsettled those who fear what might happen if a government built to be run by white property owners and businessmen starts representing other people, too.

Still, every structural incentive remains for Congress to misrepresent public opinion, where sizable majorities both hate Trump and want the government to act swiftly on climate. Thanks to gerrymandering that has rendered some 70 percent of congressional districts uncompetitive—and insufficient campaign finance rules that let shadowy corporate contributions run wild—quick cash injections can elect ever-more-extreme Republicans ready to go to war against emissions-reductions rules or anything else that might threaten their donors’ corporate profits. While some Republican voices have been loudly debating this week how to seize the party back from Trumpism, the truth is that moderate Republicans are a dying breed. Conservatives who don’t deliver can always be primaried from the right. It’s an ideological race to the bottom, where the end point—if there is one—is a GOP far more extreme than the one that carried out the attack on the Capitol last week.

“Without a political reconstruction and deep reforms to that antebellum electoral system, there is no stopping Trumpism as the dominant force in the Republican Party,” Waleed Shahid and Nelini Stamp wrote this week. The good news is that there’s plenty of low-hanging fruit to help the U.S. better represent its people. The filibuster allows the Senate minority to hold up any legislation it wants to. With 51 votes, it could be abolished. Washington, D.C., has a population bigger than Vermont’s and Wyoming’s, yet no voting representation. So long as there’s a Senate, making D.C. a state could make that body a more democratic one. The kinds of commonsense democratic reforms embodied in H.R. 1—automatic voter registration, the restoration of the Voting Rights Act, and guards against partisan gerrymandering—would help keep politicians from being able to choose their voters, making districts more competitive and allowing more people to vote. Its campaign finance provisions, in particular, would help limit the fossil fuel industry’s outsize influence over policymaking, with federally financed 6–1 matching funds that would allow small donors to compete with polluting megadonors. It would further support a constitutional amendment to end the system established by the Supreme Court decision Citizens United, which opened the floodgates to unchecked corporate influence. It would also help slow the revolving door between government and the private sector, among other reforms. Yet peeling back the laws that favor minority rule in the U.S. also means a more fundamental change to its outdated political system.

Shahid, who serves as the communications director for Justice Democrats, and Stamp, the national organizing director of the Working Families Party, recommend H.R. 4000, the Fair Representation Act. The act would establish nationwide ranked-choice voting and require districts either to elect multiple representatives from each district or, if too small for that, to elect representatives on an at-large basis. Passed into law, they explain, these provisions “would create a multi-party, proportional-representation system in the House similar to the kind many other democracies around the world enjoy,” with new, larger districts spanning the urban and rural areas currently segmented off into separate constituencies. Some 74 million people will still have voted for Trump in the last election. But such a change would make Republicans have to compete for the 81 million who didn’t, too.

A functional and representative government is a worthy goal in itself. But democratic reforms should also be considered a form of climate adaptation policy. Today’s Republican candidates might waffle on the issue of outright climate denial but enthusiastically campaign on barely veiled white supremacy. Taken together, it seems likely that their response to this crisis they’ve declined to curtail—and which will displace millions—will be simply to criminalize climate migration and double down on racism and xenophobia.

The security state built after 9/11 already defines how the U.S. responds to climate emergencies. In 2001, the Federal Emergency Management Agency was incorporated into the paranoid Frankenstein monster known as the Department of Homeland Security. As a result, its staff often have more resources to handle terrorist attacks than the sorts of disasters becoming ever more frequent as temperatures rise. John Kerry’s new post is housed within the National Security Council, and he’s talked frequently about the need to conceptualize the climate crisis as a national security threat.

Building up the military-industrial complex hasn’t been great for national security itself, as disastrous forever wars and the inflamed diplomatic relationships they’ve created show. It’s even less well-suited to stem either the climate crisis or the unhinged right. But expanding our already grotesquely bloated national security state in the name of climate change would be an aggressively on-brand way for the U.S. to deal with that problem, playing right into the worst elements of the Republican Party.

In the coming weeks, there’s guaranteed to be talk of whether fighting the American far right, and holding Donald Trump accountable for inciting a raging mob, will detract from the Biden administration’s ability to make progress on Covid-19 relief, climate policy, and other urgent priorities in the first hundred days. The beauty of democratic reform is that it would help the country move toward all of these goals simultaneously. Even the most ambitious of democratic reforms are no quick fix for what ails U.S. democracy, and won’t necessarily put robust climate policy within reach. But it’s hard to imagine a sustainable twenty-first century without them.