The company has also sent anti-union text messages to workers and posted anti-union banners in its facilities in the lead-up to a union election at its Bessemer, Alabama facility. 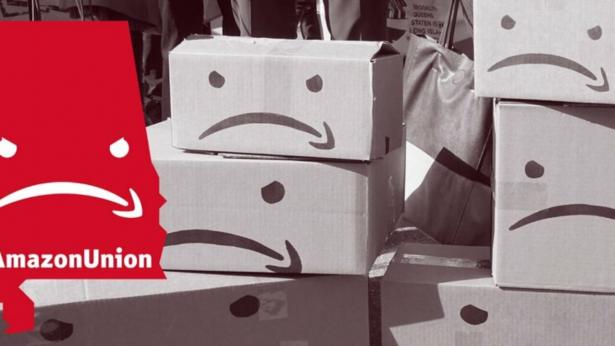 Workers are trying to organize a union at an Amazon warehouse in Bessemer, Alabama.,

A new website full of anti-union propaganda is targeting workers at an Amazon warehouse in Bessemer, Alabama in an attempt to convince them to vote against forming a union. Amazon has avoided unions throughout its 25-year history, and the union election will be one of the first in the company's history. Workers are expected to vote on February 8.

The slick anti-union website, Doitwithoutdues.com, implores Amazon warehouse workers to "get the facts" about unions, "get your voice back," and even to call a federal labor agency to revoke cards workers sign to indicate support for a union. These talking points are juxtaposed with cheery pastel animated graphics depicting megaphones, a dancing dog, and an Amazon package surrounded by hearts. Photos of friendly, empowered-looking warehouse workers dressed in Amazon-emblazoned outfits appear next to anti-union rhetoric.

Motherboard has also obtained screenshots of text messages sent to Bessemer warehouse workers and photos of signs displayed in the Bessemer warehouse with anti-union messaging, urging workers to "get the facts," about unions which also, in some cases, use the tagline "Do It Without Dues."

Under the National Labor Relations Act of 1935, it is illegal for employers to intimidate, retaliate against, or ask workers whether they support a union drive. But union avoidance firms and law firms specialize in crafting rhetoric companies can use to convince workers to vote no in union drives without breaking the law. Amazon did not respond to a question about whether a union avoidance firm helped create the website, banners, or text messages sent to workers.

"There’s so much MORE you can do for your career and your family without paying dues," the homepage reads, referring to fees that unions collect from their membership. "We’ve got you covered with high wages, health care, vision, and dental benefits, as well as a safety committee and an appeals process."

Amazon’s argument about union dues is misleading. As a right-to-work state, Alabama does not require that workers pay union dues if they work in a unionized workplace; workers must authorize unions to deduct dues from their paycheck.

The union drive at the Amazon warehouse in Bessemer, Alabama carries significant weight both for the labor movement and the e-commerce giant, marking one of the few times in the company's history that workers will have the opportunity to vote in a union election, which is scheduled for February 8. If workers vote in a union, their union could set off a wave of union organizing at Amazon facilities around the country.

For years, human rights and labor organizations have criticized Amazon for its warehouses' grueling working conditions that lead to serious injuries, sophisticated surveillance programs targeting workers, and its lack of transparency. During the coronavirus pandemic, Amazon cut off $2 an hour hazard pay and unlimited unpaid time off for its warehouses workers.

Amazon has also made clear through anti-union videos, surveillance programs, and the firing of union organizers that it staunchly opposes the formation of unions in its facilities. To represent the company in the Alabama union drive, Amazon has hired Harry Johnson, a former Republican member of the National Labor Review Board, who helped craft and interpret federal anti-union labor law. Johnson works for Morgan Lewis, one of the most prominent pro-management laws firms in the country.

"Amazon has unlimited resources to fight this union drive," said John Logan, a professor who studies union avoidance industry at San Francisco State University. "They will do anything for unions not to get a foothold. There’s no amount that Amazon wouldn’t be willing to pay Morgan Lewis to defeat this campaign."

On the new website, one link takes viewers to a list of ten anti-union talking points presented as "facts" about unions. "We want to make sure you and everyone in our BHM1 family knows all they can about unions to make the best decisions for themselves," the page reads. "You deserve to know all the information and have your questions answered before you pay almost $500 in due!" It goes on to tell viewers that unions will not provide job security, guarantee better wages or benefits and could force workers to approach union representatives instead of managers about their problems. "You could end up with more, the same… or less than you make today," it reads.

Another link directs viewers to a form that allows workers to contact Amazon to revoke a union card they've signed. (Union cards signed by workers are used to show the National Labor Review Board that there's ample support at a worksite for a union drive.)

"IF you signed a card, feel misled or concerned someone submitted your name/info without your consent, you have the RIGHT to get your card and your voice back," the website reads. "Tell the union representative you'd like your card back, call the National Labor Relations Board, or click below."

Text messages sent to Bessemer warehouse workers by Amazon rely on similar rhetoric.  "Unions are a Business," a screenshot of a text message sent to a worker obtained by Motherboard reads. "A union is an organisation that charges employees money to speak for them to their employer. A union is a business that takes money from your paycheck to fund itself."

In December, the National Labor Review Board charged Amazon with illegally firing a warehouse worker who organized to improve working conditions during COVID-19.

The National Labor Relations Board has not determined when and where the election will take place, but the NLRB says it is expected to set a date soon for early this year.