If Biden Wants to Confront White Supremacy, He Must Also End the “War on Terror”

If we are to confront white supremacy in its totality, this means that we must understand its place in the war on terror and the ways in which they intersect and fuel each other. 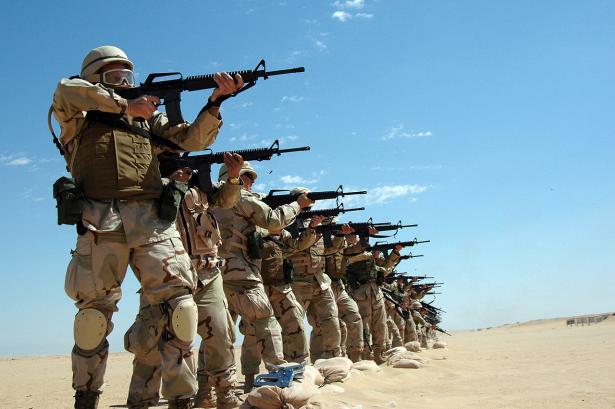 Addressing the ravages of white supremacy in the aftermath of Trump, President Joe Biden referred in his inauguration speech to “a rise in political extremism, white supremacy [and] domestic terrorism that we must confront and we will defeat.”

Biden is the first president to have explicitly named white supremacy in his inauguration speech — a fact that may seem like a welcome recognition and one that signifies progress. However, especially in light of his stressing the need for expanded domestic terrorism designations — which would primarily impact Black and Indigenous people and other communities of color — his statement was a reminder of how narrowly white supremacism is viewed, despite being entrenched in every social, cultural, economic and political institution in the United States.

In the same vein, incoming Secretary of Defense Lloyd Austin asserted in his opening statement in his confirmation hearing:

We also owe our people a working environment free of discrimination, hate and harassment. And if confirmed, I will fight hard to stamp out sexual assault and to rid our ranks of racists and extremists…. The job of the Department of Defense is to keep America safe from our enemies, but we can’t do that if some of those enemies lie within our own ranks.

Both leaders’ statements treat white supremacy as something that can be removed in an almost surgical way. Solving the problem of white supremacy then, is seen as a simple matter of removing those who embody it.

The mainstream reaction to the Capitol breach also exemplifies this misperception of the roots of white supremacy. Coming on the heels of Donald Trump’s final days in office, the breach of the U.S. Capitol solidified what many saw as the accumulation of Trump’s toxicity and the white supremacist threat that he had ignited and mobilized.

Since then, questions abound on how this could have happened, revealing how many Americans only recognize the most overt expressions of white supremacy. While evidence of members of law enforcement being involved in the violence has emerged, departments have begun to investigate and remove some with ties to white supremacist groups from their positions.

Without a broader analysis of the white supremacy of U.S. policing itself, however, this approach reduces the problem of white supremacy to one that is manifested only within individuals, not systems.

In a USA Today op-ed, a foreign correspondent relates that in “writing about the attack on Congress, my hands trembled with the gravity of the fact that this insurrection didn’t happen in a place like Iraq or Afghanistan, but here on sacred ground of our capitol’s legislative floor.” This disbelief is indicative of how many Americans view the United States: as a morally superior country where mass violence — at least against communities that “matter” (i.e. white communities) — just doesn’t happen. That kind of violence, after all, is reserved for other countries.

For the last two decades, state violence rooted in white supremacy has operated under the guise of the war on terror, and so far, there is little reason to believe this will change under the Biden administration.

Large swaths of the American public remain ignorant of the fact that much of the contemporary violence in Arab countries stems from the same source as the violence being experienced domestically: white supremacy. While the history of state violence within the United States is rooted in white supremacy, the examples of Arab countries — particularly in the context of the now almost two-decades-long “war on terror” — should not serve as a comparison to violence within U.S. borders, but rather recognized as extensions of it.

While the United States contends internally with endemic white supremacist violence, it’s also time to reckon with the repercussions the U.S.’s white supremacy has outside of its borders. For the last two decades, state violence rooted in white supremacy has operated under the guise of the war on terror, and so far, there is little reason to believe this will change under the Biden administration.

From the day that George W. Bush first declared a war on terror in 2001, citizens of countries all over the world have felt the wrath of the United States. Targeting mostly non-white, Muslim-majority countries, President Bush notably stated in a speech five days after the 9/11 attacks that “the American people are beginning to understand. This crusade, this war on terrorism, is going to take a while.”

Whether in the form of war and occupation in Afghanistan and Iraq, drone strikes in Somalia and Yemen, or the U.S.’s proxy war in Syria, the war on terror has relied on a distinct form of dehumanization rooted in white supremacy and laced with Islamophobia.

The reach of war on terror has, however, has extended beyond Muslim-majority countries abroad. One example is the Bush administration’s 2007 creation of Africa Command (or AFRICOM), which is headquartered in Germany and operates in 54 African countries — some Muslim-majority, and others not. Operating under the veil of the supposed imperative to fight terrorism wherever it is found and largely free from public scrutiny, AFRICOM embodies white supremacy and white neocolonialism.

If that’s not cause for horror, consider what was revealed in the Senate Intelligence Committee’s report on CIA torture in 2014. Among the findings were that prisoners were rectally “fed,” died from hypothermia, deprived of sleep and contained in small tight spaces, among other forms of torture. Months before the report was released, in a White House news conference, then-President Barack Obama acknowledged U.S. torture, stating bluntly that “we tortured some folks.” To this day, no one in the government has been held accountable. This is a stark reminder of how narrowly the threat of white supremacy is viewed, only becoming a cause for concern when it impacts the United States — and in particular, white people in the United States — directly.

While millions of non-white Muslims around the world have been detained, tortured and killed by the U.S., these actions are not generally treated as a consequence of white supremacy.

Another example of how white supremacist violence is exported is the Haditha massacre of 2005, where several U.S. Marines killed 24 Iraqi civilians in cold blood. Instead of focusing on understanding how the United States’ war on terror apparatus led to this level of dehumanization of Iraqis, President Bush dismissed it as a problem only on the individual level, stating that, in contrast with the direct perpetrators of the massacre, “the Marine Corps is full of honorable people who understand the rules of war.” Perhaps that’s true — not because of the reasons Bush was suggesting, but because for the U.S., the rules of war allow for the wanton murder of non-white civilians in cold blood.

In 2019, Trump, commenting on the war in Afghanistan, stated that, “I have plans on Afghanistan that if I wanted to win that war, Afghanistan would be wiped off the face of the earth, it would be gone, it would be over in literally 10 days.” It goes without saying that Trump would have never threatened a white Western country in this way. But he could when it came to Afghanistan because non-white lives are considered to be both insignificant and inconsequential.

This was made even clearer when Trump pardoned two former soldiers, Army First Lt. Clint Lorance and Maj. Mathew L. Golsteyn. The former made soldiers shoot at Afghan civilians, resulting in the death of two of them, while the latter solicited the help of two soldiers to bring the body of an Afghan civilian who he claimed was a bomb maker back to the base in order to burn him. In these two cases, white supremacy was the former soldiers’ modus operandi — and also the force that made way for their pardons.

These and many other examples demonstrate that while millions of non-white Muslims around the world have been detained, tortured and killed by the U.S., these actions are not generally treated as a consequence of white supremacy, nor is white supremacy recognized as an integral reason for how a global and Islamophobic apparatus — the war on terror — has been allowed to thrive. If we are to confront white supremacy in its totality, this means that we must understand its place in the war on terror and the ways in which they intersect and fuel each other.

Truthout needs your support   As one of the few ad-free and nonprofit newsrooms left, we rely on people like you to keep us online. Yet, month after month we find ourselves desperately trying to raise what we need just to keep publishing.  Donate Now

Dr. Maha Hilal has a Ph.D. in justice, law and society, and the focus of her research and expertise is on Muslim Americans’ responses in the context of national security post-9/11. She is the co-director of Justice for Muslims Collective and an organizer with Witness Against Torture. She has written and spoken extensively on the topic of institutionalized Islamophobia in the war on terror, with a focus on the Guantánamo Bay prison and torture.