A Tale of Two Developments: Affordable Housing or Subsidized Ultra-Luxury?

The failure of Hudson Yards should be both an object lesson and an opportunity. Grotesque hyper-luxury, with taxpayer subsidy no less, has had its day. Let’s build for regular people. Hudson Yards could be a monument to what was, and could still be. 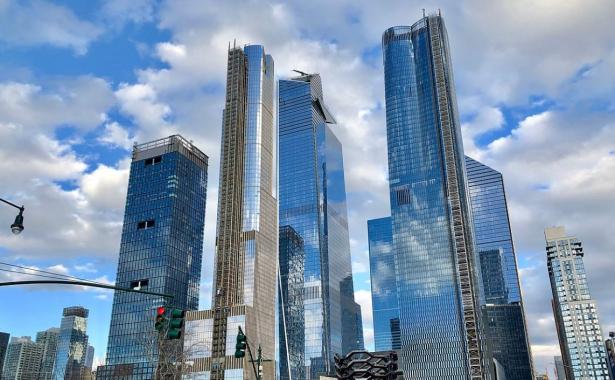 Hudson Yards in March 2019., Photo by Chris6d, his file is licensed under the Creative Commons Attribution-Share Alike 4.0 International license

On the far West Side of Manhattan, a tax-subsidized monument to private excess known as Hudson Yards sits nearly empty, a victim of the pandemic and a glut of unsold luxury condos. The development, a $25 billion travesty on 28 acres, benefited from some $6 billion in public subsidies.

Hudson Yards may well go broke. Its signature 150-foot climbing tower, the Vessel, has been closed after three suicides.

Hudson Yards was built largely on platforms over railroad tracks and yards. It is still not finished. The idea was to create something Manhattan didn’t need—a giant indoor shopping mall, surrounded by ultra-luxury condos and office towers.

But the great thing about New York is that it is a walking city—a carnival of urban activity in contrast to the soulless, indistinguishable malls that pockmark so much of suburban America.

People, both locals and tourists, don’t cherish Manhattan for its shopping malls. An immense indoor mall could only suck business away from Manhattan’s street-level retail, which has no shortage of high-end emporia for those who can afford it.

But maybe, if Hudson Yards descends into well-earned bankruptcy, it still could be affordable housing. Some of the site—its mall, its offices, and its white-elephant luxury condos—could be purchased by a nonprofit developer or taken by the city via eminent domain, and repurposed as moderate-income apartments.

The woes of Hudson Yards put me in mind of another New York development, called Parkchester, in the Bronx. I have a special fondness for the place, since I was born in Parkchester and spent my first five years there.

Parkchester is one of four moderate-income apartment complexes developed by the Metropolitan Life Insurance Company in the 1940s. Like Hudson Yards, it benefited from public subsidies in the form of tax exemptions and public improvements. Unlike Hudson Yards, the purpose of Parkchester was to serve the needs of working families.

In the 1930s, New Yorkers suffered from a terrible shortage of affordable housing. The federal government began building public housing, and it was a time of other experiments.

Housing advocates pointed out that large life insurance companies had largely escaped the ravages of the 1929 financial collapse and had pools of capital that might be invested in nonprofit housing, helped by the public subsidy of property tax exemption. MetLife, itself a mutual nonprofit in those years, was the second-largest company in America (after AT&T), with $5 billion in assets and a regular income stream of some $200 million a year. It had already developed a small, successful housing project in Queens in the 1920s.

So MetLife appointed a blue-ribbon panel of architects, planners, and designers for Parkchester. The plan was unveiled at the 1939 World’s Fair. It drew on the concepts of the French architect Le Corbusier, who proposed combining relatively dense apartment buildings with lots of open space.

The 129-acre parcel of land for Parkchester was purchased from the Catholic Church, which once used the land to house an orphanage and a farm. The designers created 51 buildings, most eight stories, with over 12,000 one-, two-, and three-bedroom apartments, to house some 40,000 people.

More than two-thirds of the total space was open. Parkchester had a baseball field, basketball courts, playgrounds, as well as plenty of space for theaters, community centers, and shops. Macy’s opened its first branch store in Parkchester.

The apartments rented for about $12 per room per month. They were targeted at moderate-income families, with incomes of $1,800 to $4,500 a year. The rents were slightly above those of public housing, but well below market-rate housing in surrounding neighborhoods.

MetLife went on to develop Stuyvesant Town and Peter Cooper Village in Lower Manhattan, and Riverton Houses in Harlem, on the same model.

What happens next tells you a lot about what has become of our country. The president of MetLife, Frederick H. Ecker, did not believe that the races should mix. So Parkchester was restricted to white people.

After the Fair Housing Act of 1968 was enacted, it was opened to people of all races. Today, its population is about 45 percent Black, with a mix of Latinos, whites, and Asians.

Today, Stuyvesant Town and Peter Cooper Village have been owned by a succession of developers, who hoped to convert all units to market-rate condos. The city government, using more public-subsidy dollars, succeeded in keeping about half the units affordable for middle-class tenants through 2035.

The Parkchester story is a more interesting variation on the theme, and demonstrates what’s possible. In 1968, as Parkchester faced racial integration, MetLife sold it to the real estate mogul Harry Helmsley. His idea was to turn Parkchester into condos and cash out big.

But residents resisted, the process was slowed, and Helmsley underinvested in maintenance. By the mid-1990s, there were over 1,400 vacant apartments and half of the units were on the market as condos, with no buyers.

Then something miraculous happened. The Helmsley partners, wanting out, agreed to sell Parkchester to the Community Preservation Corporation, a nonprofit finance organization committed to preserving affordable housing in New York. In 1998, CPC was able to buy out Helmsley for just $4 million. Harry’s wife Leona Helmsley turned out to be an ally in persuading him to sell to CPC rather than to another for-profit developer.

Over the next two decades, CPC was able to obtain tax abatements and debt financing to restore and modernize Parkchester. Today, it is more than half condos, but they are affordable condos, and it’s considered a good place for working families to live.

In the La Guardia–Roosevelt era, housing policy was about achieving for working families what markets could not do. In the era since Reagan, luxury developers have been king, even under relatively liberal mayors such as Bill de Blasio.

The failure of Hudson Yards should be both an object lesson and an opportunity. The Biden administration, with a progressive HUD secretary in Marcia Fudge, could use Hudson Yards as a pilot project; as could New York’s next, presumably progressive mayor. Maybe Chuck Schumer, in born-again progressive mode, could help find some federal money.

Grotesque hyper-luxury, with taxpayer subsidy no less, has had its day. As we build back better, let’s build for regular people. Hudson Yards could be a monument to what was, and what could still be.

[Robert Kuttner is co-founder and co-editor of The American Prospect, and professor at Brandeis University’s Heller School.]

Used with the permission. © The American Prospect, Prospect.org, 2021. All rights reserved.