A metal recycling plant is due to open on the polluted Southeast Side months after the same firm shut a metal scrapyard in a white, affluent part of town 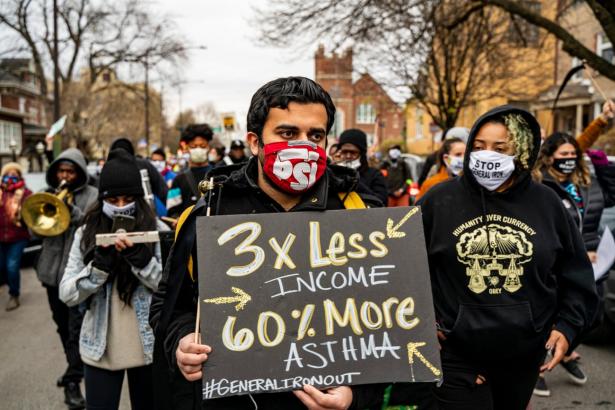 A marcher attends the Block the Permit block party in front of Loris house in Logan square, Chicago, in November 2020. , Oscar Sanchez

Trinity Colón grew up believing everyone had asthma.

Raised among heavy industry on the Southeast Side of Chicago, Colón had no reason to believe otherwise: her entire family and neighbors shared the same respiratory issues. The rituals that came with them – like keeping windows shut to ward off billowing clouds of petroleum coke – seemed ordinary.

She remembers how once or twice a year, she would be driven to the clinic by her mother when her bronchitis would act up, to receive treatment her family often couldn’t afford.

Now Colón, 17, worries the health problems she and her community face are about to get worse. In December, a recycling company called Reserve Management Group (RMG) closed a century-old metal scrapyard in an affluent, white part of town after numerous environmental violations, and now the company is close to opening a new metal recycling plant in Chicago’s Southeast Side, where many black and brown people live. In an effort to stop the city from granting RMG its final permit, community activists have now announced a hunger strike.

The new recycling plant will house a metal shredder, which uses machinery known to produce hazardous dust particles that can cause severe heart and lung problems.

If Southside Recycling opens, that particulate matter “will be inhaled through the noses, throats, and lungs of my students”, said Chuck Stark, a science teacher at George Washington high school, which is located about a half mile from the Southside Recycling construction site. Stark joined the hunger strike last week. Steve Joseph, the head of RMG, said in an op-ed that the machinery at Southside Recycling “will be enclosed and removed from public view” and “almost nothing” about it “resembles General Iron”.

The Southeast Side of Chicago is the most industrial area of the city, home to businesses that dump more than a million pounds of toxins into the air every year. In August 2020, the city released an air quality report stating that the South and West Sides are “over-burdened” by “high concentrations of industry”. And yet, organizers say local officials have characterized their campaign to stop RMG from operating in their neighborhood as making a mountain out of a molehill.

The Southeast Side is a fenceline community – a term used to describe neighborhoods that are situated next to polluting industries or facilities. In this case, the community lives alongside multiple cement kilns, warehouses and toxic dumpsites. The area is home to two Environmental Protection Agency Superfund sites, which span 154 acres altogether and are highly contaminated with toxic metals. The area has also had major problems with petcoke (petroleum coke), manganese and lead. 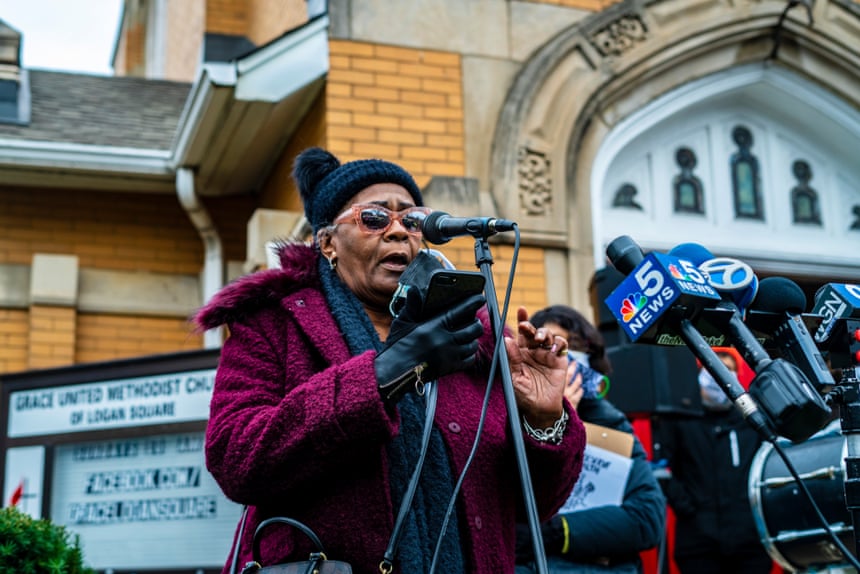 RMG’s new recycling plant would pose additional health risks. The 60617 zip code, which includes most of the Southeast Side, already had the highest number of asthma-related emergency calls (for those under age 19) in 2017. On this front, RMG’s record isn’t exactly clean – residents organized against General Iron for years due to EPA violations and complaints of noise, toxic air and health issues.

And the health consequences aren’t just physical: multiple studies have shown that even the visual effects of living among industry – streams of diesel trucks, plumes of smoke – can cause a “higher prevalence of depression and anxiety”, said Dr Susan Buchanan, public health professor at the University of Illinois-Chicago.

Residents say that the city government allowing Southside Recycling to open is another example of Chicago prioritizing profits over the needs of the people – and catering to the needs of white residents over those of black and Latino communities. In recent months, the US Department of Housing and Urban Development and the EPA have launched civil rights investigations into whether housing discrimination and environmental racism may have played a role in the move.

For the last two years, organizers on the Southeast Side have held town halls and led protests to shine a light on the dangers of industrial pollution. They charge that Mayor Lori Lightfoot has encouraged RMG’s move south to make way on the North Side for Lincoln Yards, a controversial megadevelopment expected to add upscale businesses and luxury housing to the area.

“It seems like the city acted as a concierge for General Iron,” said Ramirez, who has lived on the East Side her whole life.

A spokesperson for the city said it had “worked with stakeholders – including groups representing the Southeast Side – to create new and more stringent rules for large recycling facilities”. It is focused on helping communities most affected by pollution and would “continue to work to address residents’ concerns”, the spokesperson said.

Ramirez’s family has deep roots in the city; her great-grandfather immigrated to Chicago in the 1930s for a job at US Steel, where her grandfather and father later worked. She has seen the way environmental racism has been perpetuated in her community for years.

“Other parts of the city are becoming green and [getting] sustainable infrastructure – changing with the times – and my neighborhood is stuck in the industrial revolution,” said Ramirez, who works as midwest outreach manager for the Natural Resources Defense Council.

Ramirez’s mother developed asthma after years of living near US Steel, and Ramirez still has to tell her immunocompromised son to roll up the window while she’s driving.

“It smells terrible here and you don’t know [which] industry it is, because there’s too many to count. There are bike trails next to Superfund sites. There are asthma vans outside our schools all the time. It’s a scary place to live at the end of the day.”

It isn’t an exaggeration to say the labor that came out of the Southeast Side of Chicago built the city.

Until 40 years ago, Chicago’s Southeast Side was an industrial powerhouse. At the turn of the 20th century, the area had become a major manufacturing hub, rivaling cities like Pittsburgh with steel production jobs that attracted immigrants to the region with the promise of stable work and good wages. The John Hancock Center and Sears Tower were constructed from steel out of South Works, a former steel mill located in the South Chicago neighborhood.

But the promise of work came at a price. “You couldn’t breathe, it used to be so polluted,” said Dominic A Pacyga, a historian of the Southeast Side. “Women would hang laundry and it’d be covered in silicon dust.”

When manufacturing moved overseas in the 1980s, the Chicago steel industry basically disappeared overnight, says Pacyga – and the Southeast Side, which is now majority black and Latino, has struggled since, without adequate investment from the city and local business. The neighborhood is characterized by high-voltage electrical lines, bridges built for diesel trucks, an elevated six-lane highway and multiple brownfields in need of remediation. 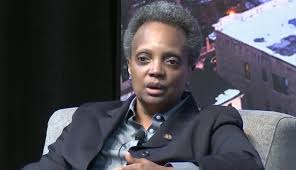 Campaigners claim that Mayor Lori Lightfoot has encouraged RMG’s move south to make way on the North Side for Lincoln Yards, a controversial megadevelopment.

Today, activists feel that industry and city leaders are taking advantage of the Southeast Side’s economic situation – using the promise of jobs to gloss over the environmental and health effects of living next to a major polluter.

In a statement to the Guardian, an RMG spokesperson, Randall Samborn, said “racial, ethnic, and income demographics of the neighborhood” did not influence the location of Southside Recycling. He said the metal recycler would create about a hundred jobs for “predominantly minorities earning head-of-household salaries”, calling the facility “state-of-the-art”.

But Olga Bautista, co-founder of the local environmental group Southeast Side Coalition to Ban Petcoke, refers to RMG’s claims as “greenwashing”. Nearby, George Washington high school has observed the highest cadmium levels in the state since construction began, and Colón says her peers are applying to selective-enrollment high schools farther north to escape the area.

The nature of these businesses makes it difficult to control emissions completely, even with regulations.

“In general, these industries … should not be located where people live,” said Dr Buchanan. “It shouldn’t matter what type of residence it is, what color they are, or what their income is.”

Crystal Guerra, who was inspired to start the community group Bridges/Puentes last year after planning local protests against police brutality, sees pollution on the Southeast Side as a racial justice issue not all that different from movements like Black Lives Matter.

Instead of social services and incentives for green businesses, city resources are going toward institutions that harm her community, Guerra argues. “We want positive investment, not punitive investment.”

The hunger strike, now in its 11th day, may seem extreme – but organizers were inspired by education activists who, in 2015, refused to eat solid foods for 34 days and successfully lobbied to reopen Dyett high school in the Bronzeville neighborhood.

The Southeast Side organizers have asked other community organizations to support them by doing a one-day hunger strike, and have been sharing updates on Twitter. In total, six people have committed to hunger striking until the city denies RMG its final permit – however long that may be.

But the physical consequences of a hunger strike are real. All participants were medically examined and taught how to check their vitals before they embarked on the liquids-only diet. Oscar Sanchez, co-founder of Southeast Youth Alliance and native of the Hegewisch neighborhood, said for the first few days he was racked with self-doubt.

“Am I doing enough? Am I tweeting enough? Are we putting our faces out there enough?” he said, on his fifth day on hunger strike.

Sanchez said he had since acclimated, and the community support he has received has only underscored the importance of the hunger strike. “If we need to put our lives on the line,” Sanchez said, “we do it because it’s for our current generation, our generation to come, and our ancestors.”

Taylor Moore is writer and journalist in Chicago. She writesabout hidden histories, subverted narratives, broken systems, and people fighting for change. Her reporting, essays, and cultural criticism have been published in The Guardian, VICE, CityLab, Literary Hub, Jacobin, In These Times, The A.V. Club, Chicago Magazine, Chicago Reader, Curbed Chicago, South Side Weekly, Next City, and elsewhere.

She is secretary-treasurer for the Chicago chapter of the Asian American Journalists Association (AAJA) and VP of programming for the Chicago Headline Club, the nation’s largest Society of Professional Journalists chapter. Previously, she was a staff writer at NextAdvisor, a personal finance site in partnership with TIME.

The Guardian Weekly magazine is a round-up of the world news, opinion and long reads that have shaped the week. Inside, the past seven days' most memorable stories are reframed with striking photography and insightful companion pieces, all handpicked from The Guardian and The Observer.  Click HERE to subscribe.