The 83-year-old was honored with the Cecil B. DeMille Award at the 78th annual Golden Globes and delivered an impassioned speech about elevating all voices. Here's the full speech. 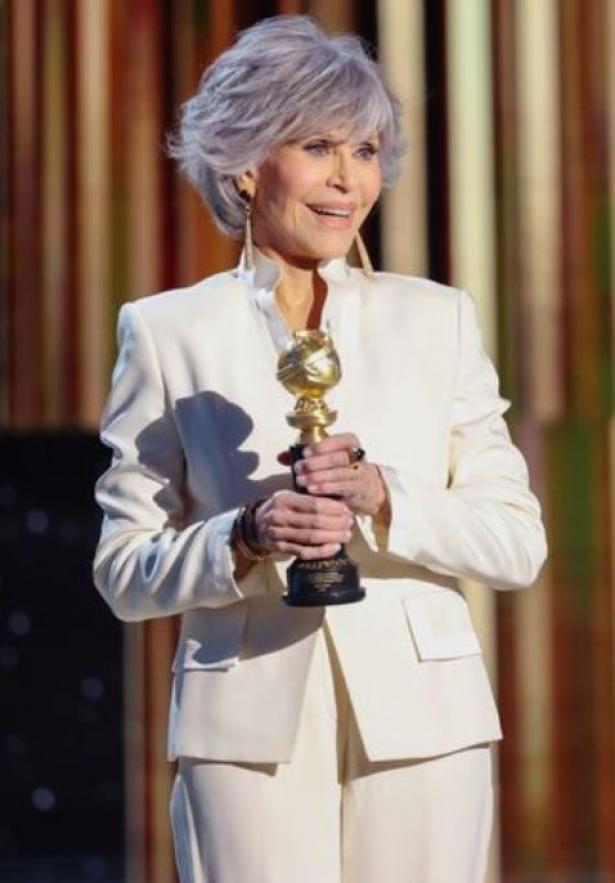 Jane Fonda received the Cecil B. DeMille Award at the 2021 Golden Globe Awards on Sunday and powerfully addressed the need for diversity in storytelling in her acceptance speech. The honor celebrated her career, which has spanned five decades, and her activism.

“You know, I have seen a lot of diversity in my long life, and at times I have been challenged to understand some of the people I’ve met, but inevitably, if my heart is open and I look beneath the surface, I feel kinship,” she told viewers.

The actor explained how stories “really can change people” before she pointed out: “But there’s a story we’ve been really afraid to see and hear about ourselves and this industry. The story about which voices we respect and elevate and which we tune out.”

She elaborated that some in Hollywood are “offered a seat at the table” while others are “kept out.”

Fonda implored listeners to “expand that tent so that everyone rises and everyone’s story has a chance to be seen and heard.”

“Let’s be leaders,” she concluded. 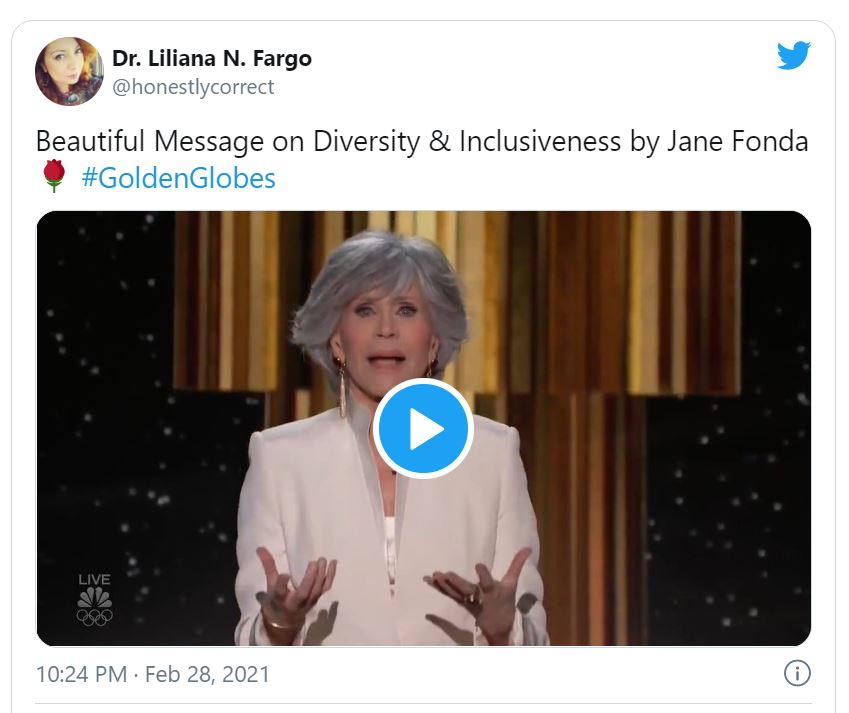 Fonda’s speech continued an ongoing plea to the Hollywood Foreign Press Association, which puts on the Golden Globes Awards each year, to be more inclusive. The organization of international journalists notably lacks even a single Black member and has not had one in at least the last 20 years.

“On behalf of the Hollywood Foreign Press Association, thank you for joining us tonight to celebrate the work of artists from around the globe; we recognize we have our own work to do,” said Hoehne. “Just like in film and television, Black representation is vital. We must have Black journalists in our organization.”

Tatna went on to say: “We must also ensure everyone from all underrepresented communities gets a seat at our table, and we are going to make that happen.”

Many on social media couldn’t help but acknowledge that Fonda’s emphatic speech did more to address the HFPA’s diversity issues than the HFPA itself: 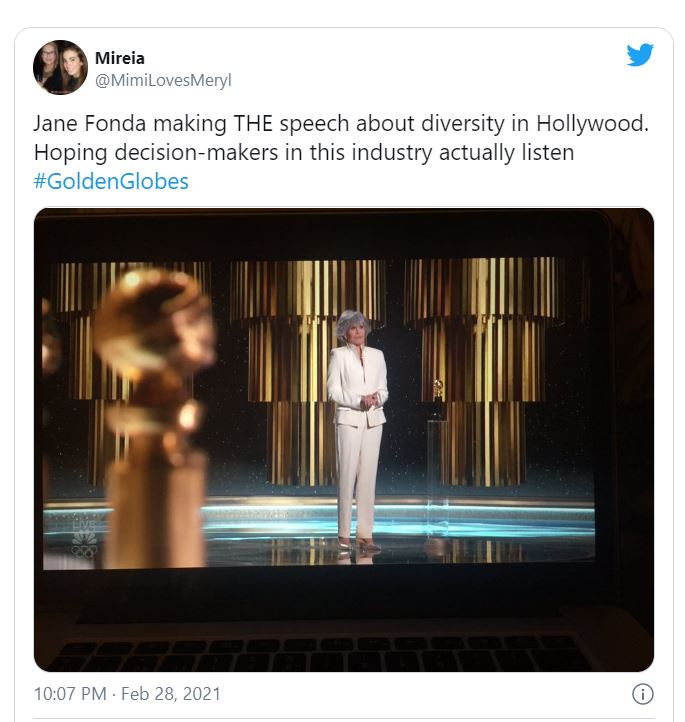 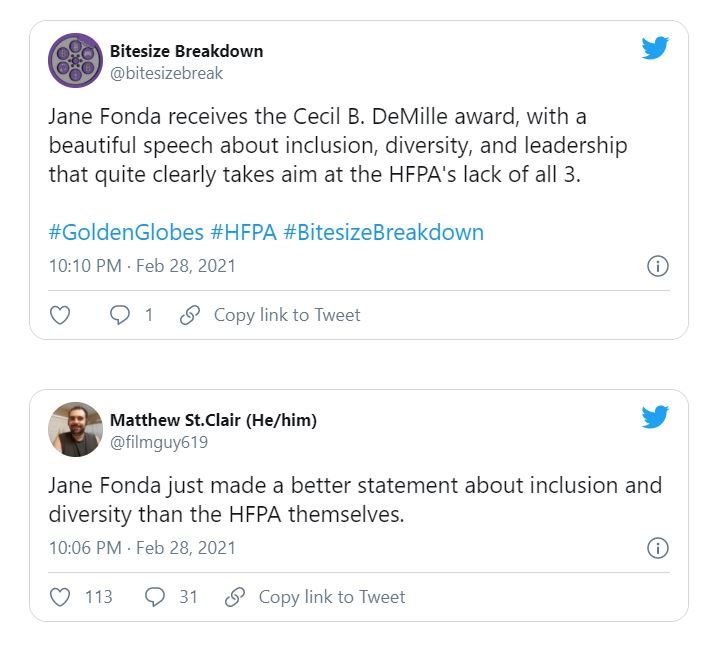 The 83-year-old Fonda, who has seven Globes of her own, is known for her iconic roles in films like “Barbarella” and “9 to 5” and, most recently, in the TV show “Grace and Frankie.”

Hollywood Foreign Press Association President Ali Sar said in a statement that Fonda’s “breadth of work has been anchored in her unrelenting activism, using her platform to address some of the most important social issues of our time.”

“Her undeniable talent has gained her the highest level of recognition, and while her professional life has taken many turns, her unwavering commitment to evoking change has remained,” he said.

[Jenna Amatulli is a trends reporter for HuffPost and an adjunct professor at the Fashion Institute of Technology in New York. Previously, she's worked and interned at Vanity Fair, Apple, BULLETT, and Conde Nast Traveler. You can usually find her reading or talking with her hands. Follow her on Twitter/Instagram: @ohheyjenna.]

It's common for the winners of the Cecil B. DeMille Award to walk down memory lane discussing their numerous career highlights.

But actress Jane Fonda took a different tack when she accepted the prestigious lifetime achievement award at the Golden Globes Sunday night.

Fonda began by exalting storytelling as an art form and praising the work of the actors and directors behind many nominated works this year. She ended by calling for better leadership in Hollywood to make sure everyone's stories are told.

"Stories — they really can change people. But there's a story we've been afraid to see and hear about ourselves in this industry -- a story about which voices we respect and elevate, and which we tune out," Fonda said.

"Thank you all the members of the Hollywood Foreign Press Association. I'm -- I'm so moved to receive this honor. Thank you.

You know, we are a community of storytellers, aren't we? And in turbulent, crisis-torn times like these, storytelling has always been essential.

You see, stories have a way to ... they can change our hearts and our minds. They can help us see each other in a new light. To have empathy. To recognize that, for all our diversity, we are humans first, right?

You know, I've seen a lot of diversity in my long life and at times I've been challenged to understand some of the people I've met.

But inevitably, if my heart is open, and I look beneath the surface, I feel kinship.

That's why all of the great conduits of perception -- Buddha, Mohammed, Jesus, Laotzi -- all of them spoke to us in stories and poetry and metaphor.

Because the nonlinear, non-cerebral forms that are art speak on a different frequency.

They generate a new energy that can jolt us open and penetrate our defenses so that we can see and hear what we may have been afraid of seeing and hearing.

Just this year, "Nomadland" helped me feel love for the wanderers among us. And "Minari" opened my eyes to the experience of immigrants dealing with the realities of life in a new land.

And "Judas and the Black Messiah," "Small Acts," "US vs. Billie Holiday," "Ma Rainey," "One Night in Miami" and others have deepened my empathy for what being Black has meant.

"Ramy" helped me feel what it means to be Muslim American.

"I May Destroy You" has taught me to consider sexual violence in a whole new way.

The documentary "All In" reminds us how fragile our democracy is and inspires us to fight to preserve it.

And "A Life on Our Planet" shows us how fragile our small blue planet is and inspires us to save it and ourselves.

Stories: They really, they really can change people.

But there's a story we've been afraid to see and hear about ourselves in this industry. A story about which voices we respect and elevate -- and which we tune out.

A story about who's offered a seat at the table and who is kept out of the rooms where decisions are made.

So let's all of us -- including all the groups that decide who gets hired and what gets made and who wins awards -- let's all of us make an effort to expand that tent. So that everyone rises and everyone's story has a chance to be seen and heard.

I mean, doing this simply means acknowledging what's true. Being in step with the emerging diversity that's happening because of all those who marched and fought in the past and those who've picked up the baton today.

After all, art has always been not just in step with history, but has led the way.

Thank you, thank you so much."