Mail-in ballots for the hotly contested battle to unionize 5,800 workers are due on Monday. Some experts are predicting a victory while others are unsure 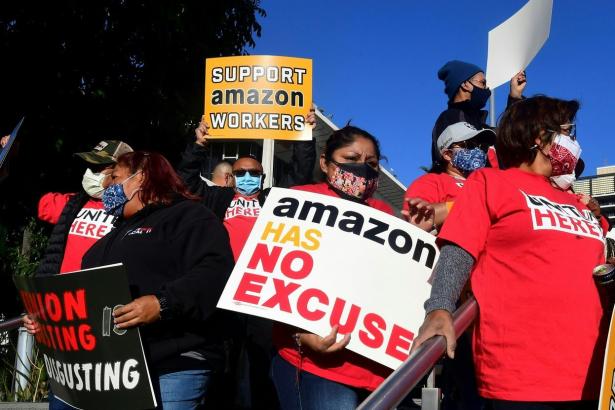 With mail-in ballots due this Monday, (March 29) federal officials will soon begin tallying the votes in what has been the most closely watched unionization drive in the US in years – the hotly contested battle to unionize 5,800 Amazon workers in Alabama. Some labor experts predict a union victory, others aren’t so sure.

While admitting he’s afraid to make a prediction, Robin Kelley, a history professor at University of California, Los Angeles, said: “I do think the union’s going to win the election. Whether it’s overwhelming or not, I don’t know, but I do think there’s enough momentum to win.”

John Logan, one of the nation’s foremost experts on corporations’ anti-union strategies, was more doubtful. “I wouldn’t put money on the union winning, but I do think there’s a chance they could win,” said Logan, a professor of employment studies at San Francisco State.

If the union wins a majority of the votes, it would be first time an Amazon fulfillment center in the US becomes unionized.

Labor experts say it’s not easy to predict whether the union or Amazon will win because there are so many cross-cutting factors at work. On one hand, numerous things are working for the union: many employees at Amazon’s warehouse in Bessemer, Alabama, are unhappy with the fast, stressful pace of work, and many complain they have too little voice on their job.

About 85% of the Bessemer workers are African American, and Black workers tend to be more pro-union than white workers. Indeed, the union seeking to organize the warehouse – the Retail, Wholesale and Department Store Union (RWDSU) – says this isn’t just a labor struggle, it’s also a civil rights struggle, one seeking to assure dignity for every worker.

At the same time, many factors are working against the union. The organizing drive is in a deep red state where the business community and many politicians vigorously oppose organized labor. Amazon is a hugely powerful, vehemently anti-union company and is carrying out a fierce and expensive campaign to defeat the union. “The union and the workers they’re organizing have huge obstacles in front of them,” said Stewart Acuff, a former organizing director for the AFL-CIO, the nation’s main union federation.

Acuff, a native of Tennessee, said it was especially difficult for unions to win in the south. “The banks, the county and city governments, the chamber of commerce will be against the union,” he said. “It’s because of ideology. It’s because of tradition. It goes back to what we still call a plantation economy based on the notion that the hungry dog hunts the hardest, and that’s no way to treat human beings.”

Janice Fine, a professor of labor studies at Rutgers, said it was hard to judge from the outside who will win. Even as union organizers and pro-union workers proclaim their optimism to the news media, inside the giant warehouse, Amazon’s anti-union managers, lawyers and consultants communicate an unrelenting anti-union message day after day. “Obviously there’s this intense, full-time union-busting presence inside the warehouse all the time,” Fine said.

The pandemic has hurt the RWDSU by preventing it from using two of labor’s most effective strategies: visiting workers at their homes to sell them on the advantages of unionizing and holding large pro-union gatherings to rally support and increase momentum, said Fine. Another important strategy for winning is to have workers talk to co-workers, but the rapid pace of work and Amazon’s keeping track of workers every moment they’re not doing their job make it harder for Amazon workers to talk to each other.

Fine says union supporters shouldn’t see it as calamitous if the RWDSU loses. “See this as they tried to organize Amazon in Alabama during a pandemic and this is how far they got, and people will learn lessons from that and carry forward,” she said. “I think it’s a step forward even if they lose.” She said more such massive efforts will be needed, adding, “You have to keep chipping away.” She pointed to several instances of unions losing in their first organizing drive, but winning in a subsequent unionization drive, as happened in 2008 at the 5,000-worker Smithfield hog-killing plant in Tar Heel, North Carolina.

Richard Bensinger, another former AFL-CIO organizing director, said: “Win or lose they [the RWDSU] already won. The good thing is they jumped in feet first. They took on the most powerful, richest guy in the world. Everyone in labor is inspired by this. When there are these big campaigns, some people in the labor movement are afraid and ask, What if they lose? If you don’t try, you’ll never win.”

Bensinger is working on organizing drives at several other Amazon warehouses in the US and Canada. “I’ve said to the Amazon workers I’m working with, ‘Whether they win or lose, the folks in Alabama are showing the way.’”

Chris Smalls, a former Amazon worker who was fired after he helped lead a work stoppage at the company’s warehouse on Staten Island, New York, recently traveled to Alabama to lend his support to the union drive.

He said the pressure on workers to vote against the union was immense. “They are being told Amazon has their backs,” said Smalls. “The message is union bad, Amazon good.” Smalls doesn’t believe the high-profile support politicians like Bernie Sanders, Stacey Abrams and even the Florida Republican Marco Rubio are giving to the union drive, will swing the vote. “It is good to have this political and public support, but I don’t think it resonates with workers,” Smalls said. After their 10-and-a-half-hour shifts, he said, “I can tell you, you are not going home and watching the local news, you are going to sleep.”

Smalls said that given Amazon’s all-out attempt to stop unionization, the chances for the union’s success are at best 50/50.

The vote could hinge on the warehouse’s younger workers, who are often warier of the union than older workers, many of whom have worked other jobs without Amazon’s frenetic, stressful pace. Many younger workers earned $8 or $9 an hour elsewhere before hiring on the warehouse, which pays a minimum of $15.30 an hour. “These young workers are saying, ‘Should I take the chance because I might get fired?” Kelley said. “Amazon has spent a huge amount of money on union-busting consultants and a propaganda campaign. If you add up all that money, they could probably raise the wages of these 5,800 workers significantly.”

If the National Labor Relations Board announces that the union won a majority of the votes, the RWDSU will still face challenges in Bessemer. Amazon may challenge the results, and it may, like many corporations, drag its feet for a year or more – a hugely dispiriting move for workers – before agreeing to a first contract.

Prof Logan sees a silver lining if the union loses: this much-publicized battle is shining a spotlight on how tilted the playing field is against unions during organizing drives, and that could build support for enacting the Protecting the Right to Organize Act, the most pro-union piece of legislation in decades. The House of Representatives passed it on 9 March.

“This is a David and Goliath story, and there will always be sympathy for David,” Prof Kelley said. “If the union loses the vote in Bessemer, there will be lot more RWDSU organizing all over the country. They’re going to keep fighting until they win at some Amazon warehouse. This is like a prairie fire. It’s going to spread even with a loss.”