labor Alabama Amazon Workers Are About to Rerun Their Union Election

A year ago, all eyes were on the unionization election at Amazon’s warehouse in Bessemer, Alabama, where illegal union suppression tactics by Amazon helped sink the drive. Thanks to a court order, that vote is about to be rerun. 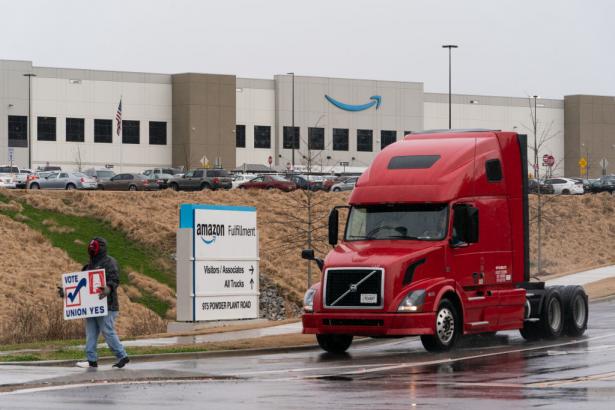 A demonstrator holds a sign during a Retail, Wholesale and Department Store Union (RWDSU)–held protest outside the Amazon BHM1 Fulfillment Center in Bessemer, Alabama, on February 6, 2021. ,(Elijah Nouvelage / Bloomberg via Getty Images)

It’s a moment of increased bargaining power for the US working class. Workers on the order of millions are quitting their jobs and finding new ones that will pay them better. Those with unions are more willing to fight to begin undoing prior concessions, their confidence bolstered by the realization that employers will have more trouble than usual replacing them should they strike; that these fights do not approach the level of struggle of the 1970s, much less the 1930s, do not make them insignificant. And the momentum is with reformers within unions: see recent efforts to transform the United Auto Workers and the Teamsters, two still mighty organizations even after sustained and systematic decline.

That is the context in which another union election at an Amazon warehouse is about to be held. On February 4, workers at the Bessemer, Alabama, facility — of greater renown than perhaps any of its hundreds of peers across the country — will receive ballots for a mail-in vote. The vote is a rerun of the effort last year to unionize with the Retail, Wholesale and Department Store Union (RWDSU), which ended with a majority of ballots cast against unionizing, the result on the order of a two-to-one vote. While both Amazon and RWDSU desired an in-person vote this time — last year, RWDSU wanted a mail-in process, while Amazon wanted the vote to take place in person — the National Labor Relations Board (NLRB) chose to again hold the election through mail-in balloting.

The NLRB ordered the rerun election after finding substance to workers’ allegations that Amazon had violated the “laboratory conditions” required during an election, specifically by creating the impression of surveillance. At issue, as has been much discussed, was the drop box Amazon pushed the United States Postal Service to install outside of the warehouse, the installation of which the NLRB Region Ten director characterized as “flagrant disregard” for the mail-in process.

Amazon’s move to install the mailbox was a bizarre one: it is immensely difficult to win a union drive at a workplace with as high a turnover rate as an Amazon warehouse, and employers have a wealth of entirely legal means of coercion at their disposal. Captive audience meetings, for instance, in which workers are compelled to listen to managers make the case against unionizing, reciting scripts drafted by union-busting consultants, are just one sanctioned method for a recalcitrant boss. At the Bessemer facility, Amazon spared no expense in this respect, adding a veritable army of consultants to its payroll in the lead-up to the vote.

Unlike last time around, when Amazon used every means at its disposal to stall, influence, or otherwise quash the union election, this time, the company failed to pursue at least some routes for stopping the vote, though it can still appeal the order for a new election even after the vote takes place. While one reason for the relative restraint may have to do with company executives believing that it would look bad to dig in its heels after the NLRB found it had violated the law, another simple explanation is that Amazon believes it will win the vote.

There are good reasons for Amazon executives to feel confident. Winning a NLRB-supervised union election is harder the second time; it goes without saying that it’s not easy the first time, either. NLRB statistics suggest that around 41 percent of rerun elections end in unionization, compared to roughly 68 percent of original union elections (per 2021 data). Many of those who withstood the company onslaught to still vote union will have left before the rerun, for reasons of the naturally high turnover rate, as well as harassment and retaliation. Workers who remain have already endured anti-union campaigning on the employer’s part, and even newer employees are aware of the decisiveness with which the company so recently defeated the union drive.

None of this is to discount the possibility of success for workers who are seeking basic democratic say over the place where they spend much of their waking life. It is simply to put the matter in perspective, a reckoning of the immense odds that all efforts to organize Amazon facilities, of which there are now several, must surmount. Workers in Bessemer have been under a microscope, and not only from the media — Amazon executives expended a lot of energy and resources on the facility, and there are plenty of ways in which that could fuel frustration and, ultimately, a union victory. Indeed, recent deaths at the facility — reportedly two in a twenty-four-hour period — are themselves a powder keg. Never say never.