Major League Baseball is a conservative institution. It speaks volumes that it moved the All-Star Game from Brian Kemp’s Georgia...Baseball needed to make this move. It had to finally do more than talk a good game. 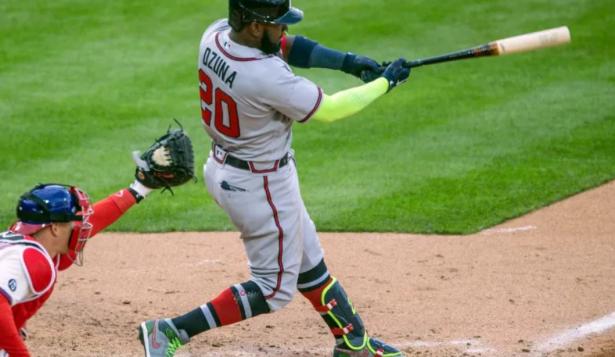 Marcell Ozuna during a baseball game against the Phillies on April 3, 2021, in Philadelphia. The All-Star Game patch that appeared on the right sleeve of the Braves' jerseys during opening day was sewn over., Laurence Kesterson / AP // The Nation

The Big Lie has been replaced by 50 little lies nestling in 50 different states. The Big Lie, of course, is that if only the presidential election hadn’t been stolen, then Trump would still be in office. That’s now playing out in statehouses around the country, with legislation aiming to suppress, primarily, Black voters.

Nowhere has the lie been embraced with more gusto than the state of Georgia, the very state that was scrutinized by every GOP official for fraud after the party got its ass kicked in the last election. They found nothing, despite Trump’s felonious insistence that Republican officials manufacture some votes for him.

Yet, in the wake of his party’s historic defeat, Governor Brian Kemp has banked his political future on the fiction that Georgia’s GOP was defeated only because of an absence of this elusive “election integrity.” So the state passed a set of Jim Crow laws buttressed by a set of Jim Crow lies. It’s brazen as hell. Instead of competing for votes, the GOP has gone full white authoritarian in a manner that would make Bull Connor blush. Kemp is serving up these oppressive laws with a hearty helping of slop-Orwellian disinformation: It’s Orwell for people who didn’t do the reading. Or, as Kemp tweeted, presumably while peering up to the sky for lightning bolts, his racist voter suppression bill “expands access to the ballot box and ensures the integrity of our elections.”

In response, Major League Baseball decided to take a stand and move the 2021 All-Star Game out of suburban Atlanta. It was really the only decision the leagues could make. Already, there were rumblings from players and managers about boycotting the game. Already, their own sponsors were pressuring them to do something. The cognitive dissonance of a year when they would be celebrating Atlanta’s own legend, the late Henry Aaron, with Jim Crow Georgia standing as a backdrop proved to be too much to bear.

Immediately, the GOP floodgates opened with one collective whine about “cancel culture” and “the woke mob.” No need to quote them. They are now baying at the moon about baseball, trans kids, Dr. Seuss… pretty much anything to distract from the unprecedented humanitarian crisis that has taken place on their watch. If there weren’t so many dead bodies strewn about, this latest “cancel culture” mewl would be high comedy. Baseball is about as liberal as George Will. It’s as conservative an institution that we have outside of official GOP circles. MLB is to radical social change what the horse and buggy was to the Model T. If anything, baseball’s revulsion should be a wake-up call to how toxic these obvious, racist voter suppression laws are to corporate America. If even baseball finds you to be too noxious a bedfellow, that should definitely be cause for some kind self-reflection. Instead, Republicans are doubling down in a fit of tantrums and martyrdom that would shame a teenager.

Shamelessness is a political vulture, always looking to feed, and sure enough, we are seeing the return of Kelly Loeffler, last seen losing her Georgia Senate race and then being driven out of the WNBA for being too racist. She had the gall to issue a statement invoking Aaron’s name, saying, “The MLB had a chance to honor an iconic trailblazer and Braves legend Hank Aaron. Instead, the[y] bowed to the woke disinformation campaign of the Left.”

When it comes to what Henry Aaron would have thought, I’ll go by his friend Dusty Baker, who said, “That was a pretty big and bold move by baseball. I’m proud of the fact they stood by the voting rights of people. This is what Hank would’ve liked. Even though it’s in his town. He had the rights of people at the forefront of his mind and his heart.”

To be clear, baseball did not move because of any kind of threatened players strike or upheaval from below. The players have had no chance to meet and discuss what their approach to the game may have been. This is about the desire of Major League Baseball as an institution to bring the sport into the 21st (or even 20th) century. MLB wants to celebrate Henry Aaron and Jackie Robinson. It wants to embrace the new faces that are making the game, like Kim Ng, Tim Anderson, and Fernando Tatis Jr. This would have been an impossibility with Governor Kemp lurking in the background. There are clearly mixed feelings about this in the league’s various owners’ boxes. The Atlanta Braves released a rather horrible statement, refusing to put the blame for this where it belongs: on Kemp and his ilk who passed these laws. Then there are the Baltimore Orioles, one of several teams to issue statements far better than the Braves’. Franchise owner John Angelos, in a statement cosigned by Baltimore Mayor Brandon Scott, wrote,

As the birthplace of civil rights icon Thurgood Marshall, we stand united with Commissioner Manfred in denouncing this malicious legislative effort to suppress voters in Georgia and other state legislatures. Baseball is our national pastime and preserving the right to vote is a pillar of our American democracy. The City of Baltimore and the Birds of Baltimore applaud MLB’s patriotism in supporting voting rights, and we encourage everyone to use this moment to fight for fair elections and register eligible Americans to vote and make their voices heard.

Yes, there are many political figures in Georgia, like Stacey Abrams, who don’t want to see any kind of economic boycott of their state. But if MLB feels like its brand will be harmed by being in Georgia, whose fault is that? Baseball needed to make this move. It had to finally do more than talk a good game. The legacies of people like Jackie Robinson and Henry Aaron, along with the climate in this country created by the social movements of the last year, put it in a position where there was really only one choice it could make. Baseball has long said the right thing without doing anything. Well, Major League Baseball is finally doing something, and what it is doing, amazingly enough, is the right thing.

[Dave Zirin is the sports editor of The Nation and the author of Game Over: How Politics Has Turned the Sports World Upside Down.]