Country Catching Up to Bernie Sanders’ Way of Thinking

Today it’s clear that on issue after issue, Sanders’ thunder on the left has carried the day among a majority of Americans, including substantial numbers of Republicans. Conservative attacks on Sanders-style proposals are increasingly falling flat. 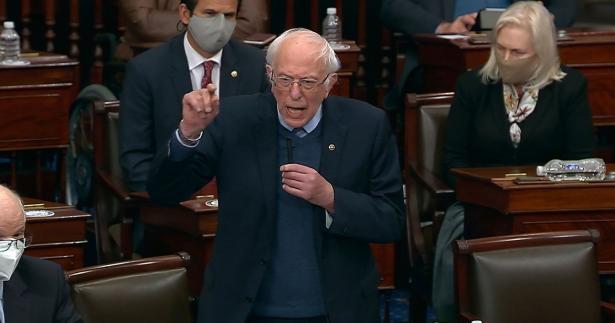 In this image from video, Sen. Bernie Sanders, I-Vt., speaks during debate in the Senate at the U.S. Capitol in Washington, Saturday, March 6, 2021.,Senate Television // Boston Herald

Bernie Sanders was never the most all-American of presidential candidates. The Brooklyn-born socialist senator from Vermont has an overpowering New York accent. Lecturing America relentlessly on its ills, he presented as a cross between Scrooge and the Grim Reaper, seemingly as likely to appeal to American voters as Leon Trotsky, with whom he appeared to share a hair stylist. He did not slap backs, could not tell jokes and spouted policy prescriptions that sounded right out of “Das Kapital.”

First in 2016 and then again in 2020 he was underestimated, and even dismissed. New York Times reporter Amy Chozick recounts missing the meaning of Sanders’ message in 2016, nearly blowing off the opportunity to interview him early in that campaign in favor of a physical fitness class. “I initially brushed Bernie off with such casual nonchalance, such ill-informed elite media snobbery,” she has written, “that I almost canceled our first one-on-one coffee because I didn’t want to miss abs-and-back day at boot camp.”

Today it’s clear that on issue after issue, Sanders’ thunder on the left has carried the day among a majority of Americans, including substantial numbers of Republicans. Conservative attacks on Sanders-style proposals for universal health care, raising taxes on the wealthy, raising the federal minimum wage and other programs as “European socialism,” once tried and true, are increasingly falling flat.

So say the polls, in any event.

In announcing his candidacy for the Democratic presidential nomination in 2019, for example, Sanders proclaimed “We say to the American people that we will rebuild our crumbling infrastructure: our roads, our bridges, our rail systems and subways and our airports,” vowing to create millions of jobs in the process. And he promised to tax the rich to pay for it.  “The wealthy and multi-national corporations in this country,” Sanders said, “will start paying their fair share of taxes.”

Americans are with him. Asked last month whether they would support President Biden’s massive public infrastructure plan even after passage of a $1.9 trillion COVID relief act, 77% of Democrats, 57% of independents and 61% of Republicans told Data for Progress pollsters that they would. A Morning Consult poll two weeks ago found that 54% of Americans supported funding those improvements by raising taxes on those earning over $400,000 a year and by raising the corporate tax rate. Unsurprisingly, this included 73% of Democrats. More notably, it included 52% of independents and 32% of Republicans. Fifty-seven percent of voters told the pollsters that they would be more likely to support Biden’s infrastructure plan if it included raising taxes on high earners; only 17% said it would make them less likely to do so. Forty-seven percent of Americans said they would be likelier to support the bill if it was paid for by raising corporate taxes, while only 21% said it would make them less likely to support it.

Raising taxes to invest in public infrastructure is not the only issue on which America’s political sands are shifting. A poll taken last fall by the Kaiser Family Foundation concluded that 53% of Americans supported a national health plan that would insure everyone. This included 58% of independents and 21% of Republicans. A contemporaneous Pew Research Center poll found that 63% of American adults believe that government bears responsibility for providing health care coverage for all, up from 2019. This included 34% of Republicans. And a recent Morning Consult poll found that a majority of Republicans support raising the federal minimum wage.

It has been a very long time since Bernie Sanders could be ignored. If once it could be said that he was ahead of his time, it must now be said that Americans are catching up to him.