The ‘New Redlining’ Is Deciding Who Lives in Your Neighborhood

If you care about social justice, you have to care about zoning. Taking on exclusionary zoning also begins to address two other challenges the Biden administration has identified: the housing affordability crisis and climate change. 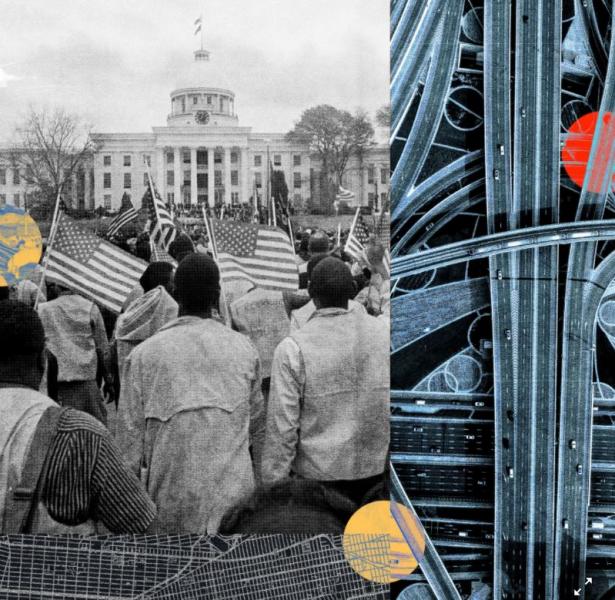 Illustration by The New York Times; photographs by Bettmann and Abstract Aerial Art,

Housing segregation by race and class is a fountainhead of inequality in America, yet for generations, politicians have been terrified to address the issue. That is why it is so significant that President Biden has proposed, as part of his American Jobs Act, a $5 billion race-to-the-top competitive grants program to spur jurisdictions to “eliminate exclusionary zoning and harmful land use policies.”

Mr. Biden would reward localities that voluntarily agree to jettison “minimum lot sizes, mandatory parking requirements and prohibitions on multifamily housing.” The Biden administration is off to an important start, but over the course of his term, Mr. Biden should add sticks to the carrots he has already proposed.

Although zoning may seem like a technical, bureaucratic and decidedly local question, in reality the issue relates directly to three grand themes that Joe Biden ran on in the 2020 campaign: racial justice, respect for working-class people and national unity. Perhaps no single step would do more to advance those goals than tearing down the government-sponsored walls that keep Americans of different races and classes from living in the same communities, sharing the same public schools and getting a chance to know one another across racial, economic and political lines.

Economically discriminatory zoning policies — which say that you are not welcome in a community unless you can afford a single-family home, sometimes on a large plot of land — are not part of a distant, disgraceful past. In most American cities, zoning laws prohibit the construction of relatively affordable homes — duplexes, triplexes, quads and larger multifamily units — on three-quarters of residential land.

In the 2020 race, Mr. Biden said he was running to “restore the soul of our nation,” which had been damaged by President Donald Trump’s embrace of racism. Removing exclusionary barriers that keep millions of Black and Hispanic people out of safe neighborhoods with strong schools is central to the goal of advancing racial justice. Over the past several decades, as the sociologist Orlando Patterson has noted, Black people have been integrated into the nation’s political life and the military, “but the civil-rights movement failed to integrate Black Americans into the private domain of American life.”

Single-family exclusive zoning, which was adopted by communities shortly after the Supreme Court struck down explicit racial zoning in 1917, is what activists call the “new redlining.” Racial discrimination has created an enormous wealth gap between white and Black people, and single-family-only zoning perpetuates that inequality.

While exclusionary zoning laws are especially harmful to Black people, the discrimination is more broadly rooted in class snobbery — a second problem Mr. Biden highlighted in his campaign. As a proud product of Scranton, Pa., Mr. Biden said he would value the dignity of working people and not look down on anyone. The elitism Mr. Biden promised to reject helps explain why in virtually all-white communities like La Crosse, Wis., efforts to remedy economic segregation have received strong pushback from upper-income whites, and why middle-class Black communities have sometimes shown fierce resistance to low-income housing.

If race were the only factor driving exclusionary zoning, one would expect to see such policies most extensively promoted in communities where racial intolerance is highest, but in fact the most restrictive zoning is found in politically liberal cities, where racial views are more progressive. As Harvard’s Michael Sandel has noted, social psychologists have found that highly-educated elites “may denounce racism and sexism but are unapologetic about their negative attitudes toward the less educated.” Class discrimination helps explain why, despite a 25 percent decline in Black-white residential segregation since 1970, income segregation has more than doubled.

By addressing a problem common to America’s multiracial working class, reducing exclusionary barriers could also help promote Mr. Biden’s third big goal: national unity. Today, no two groups are more politically divided from each other than working-class whites and working-class people of color. For centuries, going back to Bacon’s Rebellion in 1676, right-wing politicians have successfully pitted these two groups against each other, but every once in a while, America breaks free of this grip, and lower-income and working-class people of all races come together and engage in what the Rev. William Barber II calls “fusion politics.”

It happened in 1968, when Mr. Biden’s hero Robert Kennedy brought together working-class Black, Latino and white constituencies in a presidential campaign that championed a liberalism without elitism and a populism without racism. It happened again in 1997 and 2009 in Texas, when Republican legislators representing white working-class voters and Democrats representing Black and Hispanic constituencies came together to support (and then to defend) the Texas top 10 percent plan to admit the strongest students in every high school to the University of Texas at Austin, despite the opposition of legislators representing wealthy white suburban districts that had dominated admissions for decades. And a similar coalition appears to be coming together in California, over the issue of exclusionary zoning. State Senator Scott Wiener, who has been trying to legalize multifamily living spaces, told me that Republican and Democratic legislators representing working-class communities have supported reform, while the opponents have one thing in common: They represent wealthier constituents who “wanted to keep certain people out of their community.”

Taking on exclusionary zoning also begins to address two other challenges the Biden administration has identified: the housing affordability crisis and climate change. Economists from across the political spectrum agree that zoning laws that ban anything but single-family homes artificially drive up prices by limiting the supply of housing that can be built in a region. At a time when the Covid-19 pandemic has left many Americans jobless and people are struggling to make rent or pay their mortgages, it is incomprehensible that ubiquitous government zoning policies would be permitted to make the housing affordability crisis worse by driving prices unnaturally higher.

Likewise, there is widespread agreement that laws banning the construction of multifamily housing promote damage to the planet. Single-family-exclusive zoning pushes new development further and further out from central cities, which lengthens commutes and increases the emissions of greenhouse gases. This is an especially big problem for employees who cannot work remotely at a computer. Families should always have the freedom to make personal choices about their living arrangements, but as the planet heats up, it is bizarre that government would explicitly prohibit construction of the most environmentally friendly options.

It is clear that the federal government has the authority to act on this issue. While zoning laws are locally constructed, the federal government has long cited its powers to regulate interstate commerce as a rationale for pursuing important aims: combating racial discrimination in zoning, protecting religious institutions from discriminatory zoning and overriding zoning laws to site cellphone towers.

Enactment of Mr. Biden’s proposal for federal grants to encourage local reforms would be an important first step and could provide a significant incentive for change, just as President Barack Obama’s race-to-the-top program for education helped alter state and local behavior toward charter schools. But there are many other additional opportunities Mr. Biden should explore.

In December 2020, the Century Foundation, where I work, assembled more than 20 of the nation’s leading thinkers on housing over Zoom — elected officials, civil rights activists, libertarians and researchers — to discuss eight possible options. The alternatives included reinstating and strengthening the Obama administration’s 2015 Affirmatively Furthering Fair Housing rule that requires local governments to begin taking steps to dismantle segregation, as well as Mr. Obama’s 2013 guidance making clear that unjustified policies that have a racially discriminatory “disparate impact” are illegal even absent discriminatory intent. Another set of policies would require states, cities and counties receiving existing federal funding for public infrastructure and housing to develop strategies to reduce exclusionary zoning.

But Mr. Biden should go even further and create what is known as a private right of action — comparable to the one found in the 1968 Fair Housing Act — to allow victims of economically discriminatory government zoning policies to sue in federal court, just as victims of racial discrimination currently can. This Economic Fair Housing Act, which I have proposed and the Equitable Housing Institute has developed into statutory language, makes clear that state-sponsored economic discrimination is wrong, whether or not it has a racially disparate impact. And because it is wrong, the law should apply in every town and state in the country — not just those that want to participate in the new federal funding programs Mr. Biden’s proposal would provide.

For important historical reasons, being a class snob is not held in the same disrepute as being a racist. But in the context of exclusionary zoning laws, the message of the racist and the class snob is cut from the same cloth: Black families and working-class families are so degraded that the state should sponsor laws to make it illegal for anyone to build the types of housing they can afford. As we begin to come out of a pandemic in which grocery clerks, health care workers and truck drivers were recognized as everyday heroes, government discrimination against them must end.

Blue cities and states — most notably Minneapolis and Oregon — have recently led the way on eliminating single-family exclusive zoning, as a matter of racial justice, housing affordability and environmental protection. But conservatives often support this type of reform as well, because they don’t want government micromanaging what people can do on their own land. At the national level, some conservatives have joined liberals in championing reforms like the Yes in My Backyard Act, which seeks to discourage exclusionary zoning.

While democratic egalitarianism and the liberty to be free from government interference are values that are typically in tension with each other, in the case of exclusionary zoning reform, they point in the same direction. Perhaps for that reason, surveys suggest it is popular. In a 2019 Data for Progress poll, for example, voters were asked, “Would you support or oppose a policy to ensure smaller, lower-cost homes like duplexes, townhouses and garden apartments can be built in middle- and upper-class neighborhoods?” Supporters outnumbered opponents two to one. After decades of federal inaction on this issue, Congress must move boldly to embrace the country’s anti-racist and anti-elitist mood to remove state-sponsored barriers that divide the nation’s people.

[Richard D. Kahlenberg (@RickKahlenberg) is a senior fellow at the Century Foundation and the author of “Tearing Down the Walls: How the Biden Administration and Congress Can Reduce Exclusionary Zoning,” from which this essay is adapted.]