A workforce largely composed of immigrants and women of color is fighting to organize a union after facing low wages, poor conditions and lax safety protections during the pandemic. 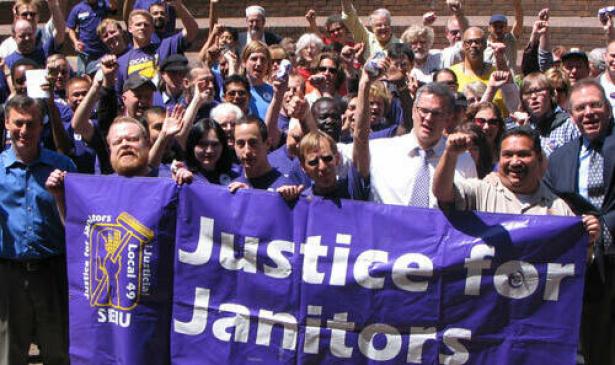 Janitors in Florida are fighting to organize a union through the Justice for Janitors campaign as the predominantly immigrant and women of color workforce have faced severely low wages, poor working conditions and lax safety protections during the pandemic.

“Janitors want their jobs to be a path to the middle class and they can’t do it if they’re an isolated pocket of good jobs, they have to help organize the market,” said Helene O’Brien, Florida coordinator of 32BJ Service Employees International Union (SEIU), who are organizing the drive.

She added: “As the industry has grown, pay has increased for everyone in the real estate industry but the janitors. No one thinks about them, they just want the work done. They’re forgotten with low pay, no benefits, no sick days, very little respect, and sometimes exposed to real abuse.”

Janitors in south Florida are the lowest-paid janitors among major metropolitan areas in the US with the cost of living taken into account, with workers receiving an estimated median wage of $8.50 an hour.

According to a November 2019 report published by UCLA and 32BJ SEIU, 57% of janitors in south Florida live below or near federal poverty level, 69% are rent burdened, 49% are uninsured, and 33% rely on government assistance programs.

Despite the industry these janitors work in, commercial real estate, experiencing a surge in profits and wages for real estate lessees over the past two decades, with 28.9% increase in wages from 1998 to 2018, janitors in the area saw their wages increase by only 1.6%.

The janitorial workers organizing for union representation, higher wages and benefits are facing aggressive opposition from employers, including claims of firings in retaliation for union organizing and various unfair labor practice charges that have been filed with the National Labor Relations Board.

In early April 2021, the owner of the janitorial contracting company, Greene Kleen, showed up to a union organizing meeting uninvited and refused to leave when asked, according to allegations outlined in an unfair labor practice charge by the union.

One of the workers in attendance at the union meeting was Jackeline Bonnet, an immigrant from Colombia who says she was fired from Greene Kleen in January 2021 in retaliation for union organizing efforts when she asked for two days off, unpaid, so she could take a long weekend to visit her parents in Colombia who were sick.

“I went to the meeting with the workers so I could talk about my struggle with Greene Kleen,” said Bonnet. “When you see yourself surrounded by the owner, supervisor and attorney, you get scared that they will retaliate against you. I’m a living example but I’m not going to stop fighting, to keep on trying to move forward so that the essential work, cleaning, is valued ”

On 6 May, janitors at Greene Kleen in Doral, Florida, went on strike and picketed through the city in response to firings and unfair labor practice charges by employers in response to worker organizing. About 30 workers at the office buildings in Doral were recently informed they will lose their jobs at the end of May 2021 as the real estate company that operates the office buildings where they work, Codina Partners, decided to switch cleaning contractors.

According to SEIU 32BJ, when contractors switch, workers are typically retained to ensure continuity of service and avoiding retraining, but an email provided from the contractor to the union noted workers would be replaced at the request of Codina Partners.

Bonnet first started organizing at her workplace at the beginning of the coronavirus pandemic, as she and other workers claimed they were experiencing a lack of personal protective equipment and improper cleaning products, such as old and dirty rags, broken dustpans and old brooms.

In response to Bonnet advocating for improved working conditions, she claims management isolated her from co-workers, increased her workloads and ultimately used her parents’ illness as an opportunity to fire her. When she requested the days off, they told her that they couldn’t guarantee her position would be available when she returned.

Lorena Cortez, an immigrant from Nicaragua, worked at Greene Kleen for six months in 2020 during the pandemic for just $8.56 an hour with no benefits or paid time off, until she was fired in July 2020 after delivering a petition from herself and other co-workers demanding personal protective equipment and proper cleaning products.

“The cleaning supplies were very poor and lacking. There was no disinfectant and oftentimes we had to clean with water,” said Cortez, who sewed masks for herself and co-workers to try to make up for the lack of PPE.

The same day she handed the petition to her manager, Cortez said retaliation started. She was reprimanded for her uniform, though workers weren’t provided one to work in, for not wearing proper footwear due to a heel spur, though it hadn’t previously been an issue, and a third floor was added to Cortez’s regular workload.

After her firing, Cortez couldn’t afford her medicine for hyperthyroid issues, resulting in her experiencing worsening symptoms such as headaches, palpitations and high blood pressure.

Later in 2020, Cortez, who lives with her mother and sister, were evicted because the owners of their home wanted to sell, so she had to take out a high-interest loan to afford three months’ rent to move into another apartment, and she is still paying it off.

Greene Kleen and Codina Partners did not respond to multiple requests for comment.

Over the past 200 years, we have reported on the most critical issues and events of the day, and published countless exclusives that have held the powerful to account and exposed incompetence, injustice and impropriety. From the global movement for racial justice to the climate crisis, from a broken food system to life in an age of misinformation, our fact-based journalism highlights injustice, offers solutions and helps make order out of a dizzying news cycle.

If there were ever a time to join us, it is now. Every contribution, however big or small, powers our journalism and helps sustain our future. Support the Guardian from as little as $1 – and it only takes a minute. Thank you.