Patent Monopolies and Inequality: When We Give Rich People Money, Why Does Inequality Surprise Us?

We don’t need patent monopolies to finance the development of drugs or vaccines. 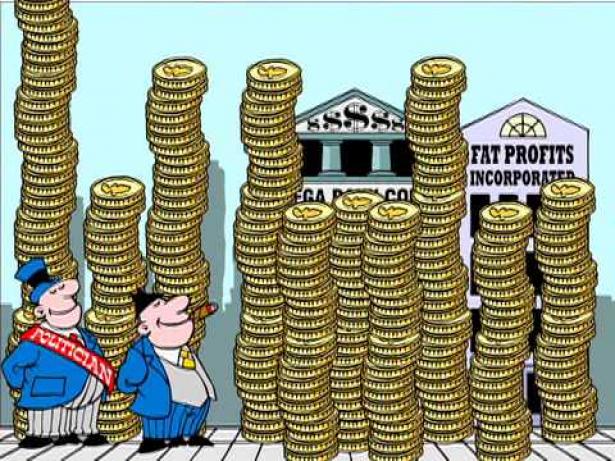 , Still from Tax the Rich animation by Mike Konopacki. written and directed by Fred Glass, narrated by Ed Asner

In recent weeks there have been several articles noting the enormous wealth that a small number of people have made off of the vaccines and treatments developed to control the pandemic. Many see this as an unfortunate outcome of our efforts to contain the pandemic. In that view, containing the pandemic is an immensely important goal, if some people get incredibly rich as result, it’s a price well worth paying. After all, maybe we can even tax back some of their wealth after the fact.

The infuriating part of this story is that it is so obviously not true. But, just as followers of Donald Trump are prepared to believe any crazy story he tells about the stolen election, our intellectual types are willing to accept the idea that the only way we could have gotten vaccines as quickly as we did was by granting a small number of companies and individuals patent monopolies. And, just as no amount of evidence can dissuade Trumpers from believing their guy actually won the election, it is not possible to get most people involved in policy debates to consider the possibility that we don’t need patent monopolies to finance the development of drugs or vaccines.

This is especially disturbing in the case of the current crop of vaccines developed in the United States and Europe. The development of mRNA technology was done overwhelming on the public dime. This is hardly a secret. In fact, the NIH owns one of the key patents that Moderna used in the development of its vaccine.

The New York Times even recently featured a piece highlighting the work of Dr. Kato Kariko, who it claims spent her whole career working on government grants and never earned more than $60,000 a year. Of course, it is reasonable to pay top notch researchers like Dr. Kariko considerably more than $60,000 a year, but the point is that researchers can be motivated by money (as well, as the commitment of many to help humanity), they don’t need government-granted patent monopolies.

The development of the Oxford-AstraZeneca vaccine was also paid for almost entirely with public money. AstraZeneca was in fact brought on after the fact as a partner, at the urging of Bill Gates. The vaccine itself was developed by a team of researchers at Oxford.

In the case of both the mRNA vaccines and the Oxford-AstraZeneca vaccine we could have just contracted with the companies to do the work, we didn’t have to give them patent monopolies. If this sounds strange, go outside and look at the street in front of your house. The company that paved the street was paid on a contract with the government, it did not get a patent monopoly on the street.

The problem with biomedical research is that the proprietary nature of the knowledge, coupled with the enormous incentive to sell products at patent protected prices, is a huge invitation to corruption. The most dramatic example of this problem is with the opioid crisis, where the leading manufacturers have billions of dollars in settlements based on the allegation that they deliberately misled doctors and the general public about the addictiveness of the new generation of opioids. If OxyContin and other opioids had been selling as cheap generics, there would have been little incentive to lie about their addictiveness. And, of course if all the clinical trial results were fully public, they would not have been able to get away with lying in any case.

There is also the issue with drugs that the government or private insurers, regulated by the government, pick up the vast majority of the tab. For this reason, who don’t have to worry about direct government funding of research over-riding individual consumer decisions, as might be the case with items like cars or smart phones. Demand for a particular drug is already not determined by individuals, so there is nothing to usurp.

The great fortunes created by patent and copyright monopolies go well beyond the current crop of Covid vaccine billionaires. There are many people who have gotten tremendously rich developing software and other information technologies, medical equipment, and genetically modified plants, as a result of patent or copyright monopolies. Bill Gates has volunteered to be the poster child here.

While many of the contributions made by these rich people have been socially valuable, we have to recognize that the rewards they received were a policy choice. We could have made their patent and copyright monopolies shorter and/or weaker. We also could have relied more on direct funding for open-source research.

That is a basic logical point. Patent and copyright monopolies are not given by god, or even the constitution (go read Article 1, Section 8). We can structure them anyway we like and we can integrate them with other mechanisms for supporting research. Our decision to structure patent and copyright monopolies in a way that allows for a small number of people to get incredibly rich is because we have politicians who like very rich people.

There is nothing inherent in the market or any requirement of technology that requires this outcome. And, this outcome is justified by economists and reporters who are too lazy or incompetent to think for themselves. Just like any good Trumper, they repeat what they are told.

Vaccine Failure in the Pandemic

In spite of the celebration of the success of our vaccines in controlling the spread of the virus among people who get them, we have done an abysmal job in vaccinating the world. At this point, Africa, which has more than 15 percent of the world’s population, has received just 1.7 percent of the world’s vaccines. The situation in much of Latin America is not much better, as is the case in some of the poorer countries in Asia. India is of course suffering terribly from a shortage of vaccines, even though it is one of the world’s leading manufacturers and has a vaccine it developed itself.

China has been able to distribute 460 million vaccines domestically, in the last month. This is in addition to providing tens of millions off doses to countries around the world. At that pace, it will be able to produce enough vaccines to cover most of the world’s unvaccinated population early in 2022. By contrast, our experts insist that we can’t possibly make the U.S.-European vaccines any more rapidly than we already are, even if we suspend patent protections and share technology. In fact. Thomas Cueni, the director general of the International Federation of Pharmaceutical Manufacturers and Associations, insists that we can’t even produce items like syringes and vials that are needed to distribute the vaccines. (This assertion can be found at 21.10 here.)

The implication is that China’s scientists and engineers must be much more competent than the U.S. ones. (I realize the mRNA vaccines are more effective, but the Chinese vaccines have been very effective in bringing the pandemic under control in countries where they have been widely distributed, like Serbia and Hungary.) It’s too bad that we have such second-rate people in charge of our anti-pandemic efforts. (Bill Gates played a leading role with his foundation.) Maybe next time we should outsource the job to China.

Dean has written several books including Getting Back to Full Employment: A Better Bargain for Working People (with Jared Bernstein, Center for Economic and Policy Research 2013), The End of Loser Liberalism: Making Markets Progressive (Center for Economic and Policy Research 2011), Taking Economics Seriously (MIT Press 2010) which thinks through what we might gain if we took the ideological blinders off of basic economic principles; and False Profits: Recovering from the Bubble Economy (PoliPoint Press 2010) about what caused — and how to fix — the current economic crisis. In 2009, he wrote Plunder and Blunder: The Rise and Fall of the Bubble Economy (PoliPoint Press), which chronicled the growth and collapse of the stock and housing bubbles and explained how policy blunders and greed led to the catastrophic — but completely predictable — market meltdowns. He also wrote a chapter (“From Financial Crisis to Opportunity”) in Thinking Big: Progressive Ideas for a New Era (Progressive Ideas Network 2009). His previous books include The United States Since 1980 (Cambridge University Press 2007); The Conservative Nanny State: How the Wealthy Use the Government to Stay Rich and Get Richer (Center for Economic and Policy Research 2006), and Social Security: The Phony Crisis (with Mark Weisbrot, University of Chicago Press 1999). His book Getting Prices Right: The Debate Over the Consumer Price Index (editor, M.E. Sharpe 1997) was a winner of a Choice Book Award as one of the outstanding academic books of the year.

Thank you for choosing to make a donation to the Center for Economic and Policy Research (CEPR). CEPR is a non-profit 501(c)(3) organization, and your entire contribution is tax-deductible to the fullest extent of the law.