Critical race theory is not primarily about history. It is about the effects of history on institutions, policies, laws, and, most importantly, ideas. And that makes the rightwing deeply uneasy. 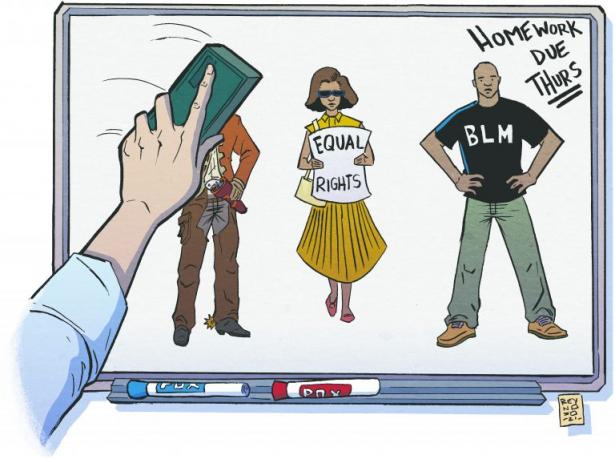 When I was a student at Florida State University many moons ago, the state legislature took a surprising amount of interest in our course offerings. So much so that one of the advanced-level philosophy classes I took had been cleverly retitled as “Post-Hobbesian Materialism” although everyone knew it was a course on Karl Marx’s Capital, Volume One.

Today, several state legislatures around the country are considering banning the teaching of critical race theory. Proponents of the ban are arguing in every public venue they can find that CRT is grounded in “identity-based ideologies” that promote division and resentment. Trying to sound a wee bit woke, critics say we should avow pluralism, but not purism. Over the decades, targets shift, but the basic fear remains: Are they teaching our kids to hate this country, or, if white, to hate themselves?

I can sort of understand the concern. Raoul Peck’s incredible documentary on the history of European colonialism (Exterminate All the Brutes on HBO) is giving me nightmares. I am not showing it to my 10-year-old grandson, yet. But he has a need to know about the truth of the history that has affected his life. And he deserves to be respected enough to be taught the truth.

Over the decades, targets shift, but the Right’s fear remains: Are they teaching our kids to hate this country, or, if white, to hate themselves?

Critical race theory is not primarily about history. It is about the effects of history on institutions, policies, laws, and, most importantly, ideas. Some ideas that appear to be good allies in the fight against racism have proven helpful for those who want to maintain the sad state of the status quo. The tools we currently have from the classical liberal lexicon of modern European philosophy — the ideals of neutrality, individual freedom, universalism, representative democracy — were created so that the bourgeoisie could fight off the aristocracy. This fight was primarily against the inherited rights of the nobility, which thwarted entrepreneurial activity. The philosophical tools developed to unseat (or un-head) monarchies were quite useful in this struggle, but they have proved ineffective in redressing broader social injustices since the ostensible end of Jim Crow.

By 1970, civil-rights legislation had ended officially sanctioned racial segregation. Overtly racist practices in regard to employment, education and housing were no longer tolerated. Affirmative action worked to diversify the professional managerial class, law schools, medical schools, the top journalism schools and so on, with a predictable sea change in the public sphere. Imagine NY1 without Errol Louis! Or MSNBC without Ali Velshi!

But affirmative action policies have always had to tread lightly. They have to show that their practices are one-offs, merely temporary deviations of the ideals of neutrality and universality, ideals that the state must continue to take as the bedrock for defining what justice means (and for establishing its legitimacy). “Affirmative discrimination” policies that favor minority-owned businesses or minority applicants must continually operate on the defensive.

Infamously, the Supreme Court ruling that allowed the University of Michigan to continue to use demographic diversity as one of its criteria for selecting students approved it only because it could establish ‘universal effects.’ The Court let the university take demographics into account because diversity would contribute to the educational experiences of white students. Affirmative action could not be validated because of its effects on Black and Brown students, but because of its effects on improving the education of the majority, meaning whites, though this was cloaked under the concept of universality.

This example reveals why critical race theory was born. The goal of this loose and interdisciplinary collection of scholars was to take civil rights to the next level by rethinking the ideas and practices undergirding current conceptions of justice. This requires discerning and unraveling the material and ideological effects of slavery, colonialism, land annexation and genocide that are still with us in our institutions, our ideas, and our lives.

To get to this next level, we need to do some theory to see what policy proposals might work better. Liberal norms may retain some utility, but let’s put them on the defensive for once, to explain how they continue to allow racial disparities in every major social sector to grow and fester, and sometimes worsen. Let’s be open to considering how they might need some revision.

Neutrality can harbor racism like a stealth bomber that flies below the radar.

Conservatives (the most ardent defenders of classical liberalism, ironically) have a religious zeal about the concepts of individualism, freedom, and neutrality. These are taken as self-evident truths, as the Declaration of Independence puts it, with inviolable validity and value. Yet, there is no reason to take any concept as received wisdom, as sacred, or as untouchable. Concepts are simply ways we have of making sense of our world. I experience myself as being able to think differently than my parents; in this way I claim my individuality and my ability to think for myself. This was the banner of the Enlightenment: Think for yourselves! It was a prescription, or exhortation, but it was also predicated on a view about the reality of human beings. We each have brains, and we can each make full use of them and come to new and sometimes contrary ideas. Individualism is thus a value and a goal, wherein political (and educational) institutions should allow it and nurture it without trying to pummel it into mush. But individualism is also a description of human beings.

Here is where we can see the limitations of liberalism. The description of human life that individualism sometimes assumes can be way off. I am influenced by others; I am affected by the concepts I have readily available to me in my milieu; I am embedded within relationships that I did not freely choose but that incur significant obligations and duties; and so on. Individualism needs to be tempered with a heavy dose of social realism about the ways in which our lives work, as well as the way societies create the conditions for individual freedom, or not. Laws and policies structure the choices we have available to us. Individualism is not entirely false, but it is often interpreted in a way that is hugely false.

Critical race theory has endeavored to start with the facts, such as persistent racial disparities, and then move backward into the theories that are obviously inadequate in addressing them. Neutrality can harbor racism like a stealth bomber that flies below the radar. Jim Crow said “White men wanted”; neutral, color-blind policies say “Anyone can apply.” But how will “anyone” be judged if they have a criminal record, a spotty employment history, an accent? The word ‘felon’ is unraced, neutral, applicable to anyone, and thus an apparently fair and universal standard to apply.

Opponents say that critical race theory is teaching our kids to see racism where it doesn’t exist. But in truth, it is simply an effort to see how racism may be working beyond what liberal concepts can reveal.

[Linda Martín Alcoff is a professor of philosophy at Hunter College. She is the author of The Future of Whiteness (Polity, 2015).]