The Kids Are Reimagining International Solidarity

Millennial and Gen Z activists are connecting their struggles at home to the workings of US empire in Palestine, Haiti, Colombia, and other countries. 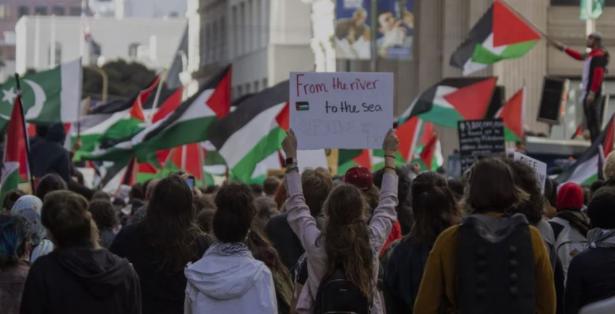 Hundreds of people are gathered in front of the general consulate of Israel to demonstrate in support of Palestinians in San Francisco, Calif., on May 18, 2021., Burak Arik / Anadolu Agency // The Nation

SAN FRANCISCO—I’m standing in a sea of Palestinian flags and people gathered at the BART plaza at 16th and Mission. Hip-hop-infused English and Arabic chants of “From Palestine to Mexico, the border walls have got to go!” blare out of big, black speakers, as the keffiyeh-wearing crowd of young Palestinians and supporters bob their heads in sync. Mexican street vendors fill the morning air of Mission street with the smell of grilled, bacon-wrapped hot dogs, while Afro-Cuban street vendors lower the volume of their syncopated Bakosó beats out of respect for the youthful crowd and their cause: solidaridad.

What the migrant vendors recognize is how millennial and Gen Z activists—many of whom are migrants themselves or the children of immigrants and refugees—are refining the rhythm of resistance and solidarity, aligning their struggles at home with the fights against US empire in the streets of Palestine, Haiti, Colombia, and other countries.

“Solidarity means we’re all together in this,” says Nour Bouhassoun, 23, a youth leader with the Arab Resource and Organizing Center. “The colonial violence of Israel and the US is a threat to all of us as Palestinians, as Arabs, as women, as queer people and as people of color.”

She connects the fight against global militarism with the Stop Urban Shield and Black Lives Matter (BLM) protests against US policing she’s participated in since she attended the once-heavily-policed school just six blocks from here, Mission High, my alma mater. I’m stricken by her political clarity.

“We lead our own movements now,” she adds while marching to City Hall. “Not just our solidarity, but our being in community with others is a threat to them because our joy is power, life is power. Taking ownership of our lives, of our movements. That’s power.”

Bouhassoun’s refreshing approach to politics previews the end of the model of monophonic, single-issue, white-led solidarity movements of my era. It also previews something more momentous: the marvelous rise of the millennial and Gen-Z left.

At the heart of this young politic are members of the millennial generation and Gen Z, “majority minority” generations of people born after the early 1980s. Demographers affiliated with the Democratic Party first predicted that the catastrophic realities of their era—economic recessions, US decline, climate change—would make these generations ever more “liberal” than its predecessors. Left out of the convenient calculations of Democrat-leaning demographers was the inconvenient fact that this generation would also give rise to a sizable—and formidable—internationalist left flank.

This new solidarity is more politically polyphonic, connecting layers of global, anti-imperialist politics while also creating space for the voices, stories and melodies of local and national struggles. Many of those leading the movement are either migrants themselves or the children of migrants. Their politic fuses classic left notions of solidarity (as in the “fraternité” and “solidarité” enshrined in the French Revolution) and adds a sensibility rooted in nonwhite cultures, as in the case of Ubuntu philosophy in South Africa or the Palestinian concept of  Tadamun  تضامن, which is rooted in Koranic philosophy that admonishes believers to “help one another in righteousness and piety, but do not help one another in sin and transgression.”

In addition to the advent of WhatsApp, Telegram, and other digital technologies used to organize across borders, this solidarity is being shaped by more recent developments, most notably demographic shifts and immigration, militarized policing, the rise of neofascism, and BLM.

Unlike many millennials, Gilbert San Jean, a Miami-born and -raised Haitian, sees BLM as a continuation, rather than a start of the movement to value Black life. “Haiti is the personification of BLM,” says San Jean, a PhD who’s a member of Avanse Ansanm (“moving forward together” in Creole), a Haitian-American millennial organization. “The republic was founded in 1804 as the first slave-free state and the first Black republic in the hemisphere. BLM is a continuation of what began in 1804.”

The long history of Haitian solidarity has yielded fruit. San Jean and Avanse Ansanm are among the Haitian organizations in the United States that successfully organized—through petitions, lobbying, marches, protests, educational campaigns—to push the Biden administration to reinstate the 18-month stay of deportation known as Temporary Protected Status. Over 100,000 Haitian migrants fleeing the critical situation on the island will benefit.

San Jean and young Haitians are not resting on their laurels. They continue to monitor the situation in Haiti, where the authoritarian rule of President Jovenel Moïse has had him leading the country without a legislative body since January 2020. Following Nou Pap Dòmi (“We are not sleeping”), a millennial-led movement in Haiti that grew out of a corruption scandal, San Jean and others are concerned about the massacres and other violence the security forces of the Moïse administration have unleashed. Though critical of the Moïse government, the Biden administration continues military and other aid to Haiti, a pattern seen throughout the hemisphere, especially in Colombia.

Lala Peñaranda, a 28-year-old  Colombian immigrant who identifies as a “socialist feminist,” sees the same noxious workings of empire—neoliberal economics backed by militarism (and increasingly militarized policing)—not just in Haiti or Bogotá or Puerto Resistencia in Cali, Colombia, but in her increasingly Latinamericanized home in the empire itself: Jackson Heights, in New York City.

“Our Fuck the Police rallies here connect us back to home and vice versa,” said Peñaranda, one of many young Colombians organizing recent solidarity marches of thousands in NYC. These marches, she says, build on the work of previous generations of paisanos (fellow Colombians) while also connecting politically and strategically to the motherland.

“When people here were talking about burning NYPD precincts during Black Lives Matters protests, we saw people in Colombia burning 16 precincts,” she said from her Jackson Heights apartment. “We’re seeing one another, copying tactics and sharing knowledge. The main point is, wherever you are you have to resist. You need to be strategic to wherever you are—and whoever you are.”

Three thousand miles away, in LA’s Echo Park neighborhood, Samantha Pineda echoes Peñaranda’s admonitions about strategy and identity. Pineda, the 31-year-old program director of the Committee in Solidarity with the People of El Salvador (CISPES), represents a major shift from the white-led organization I knew at the tail end of the industrial age.

“We’ve made a conscious shift in leadership over the past fifteen years,” she says. “CISPES recognized that the future of solidarity are young Salvadorans.”

“The better-known history is that CISPES was founded by white folks engaging in solidarity in the late ’70s,” Pineda continues. “But that history invisiblizes the Salvadorans who helped found it from behind the scenes because of their undocumented status and revolutionary politics. Some of those Salvadoran revolutionaries brought strategies to build an unparalleled campaign to get people in the US to support Salvadoran political movements. They learned these and other strategies from the example of the Vietnamese.”

My mind goes back to some of the FMLN guerrilla commanders I knew, some of whom were sent to Czechoslovakia, Cuba, the Middle East, and, especially, Vietnam during the war. The Frente sent them to these countries so that they could tap into the circuitry of global revolution and learn politico-military strategy and tactics, along with one of the most definitive parts of their political education: solidarity. Some of them brought this knowledge to the United States where the “refugees” exercised power from behind the scenes of CISPES.

CISPES’s new approach to solidarity culls and conjures—but is not limited by— the institutional silence of the legendary Salvadoran past, as it faces the old curse.

“Our main campaign is about ending all US military and police aid and training to Honduras, Guatemala and El Salvador” she tells me. “All three countries have the problems of authoritarianism, violations of human rights and continued military aid and training of police and military used to suppress activists opposed to extractivism, labor rights and other issues.”

Back at the San Francisco rally, 19-year-old Angel Romero and her sister, Jackie, listen to the chants of “From Palestine to Mexico, the border walls have got to go!” from a very unique perspective.

[Roberto Lovato is the author of Unforgetting: A Memoir of Family, Migration, Gangs and Revolution in the Americas (Harper Collins), a New York Times “Editor’s Choice,” which the paper hailed as a “groundbreaking memoir.” Lovato is also an educator, journalist, and writer based at The Writers Grotto in San Francisco.]