Under pressure from labor leaders and insurance execs, NY Dem leaders are blocking a vote on health care legislation even though it has majority support in the legislature. 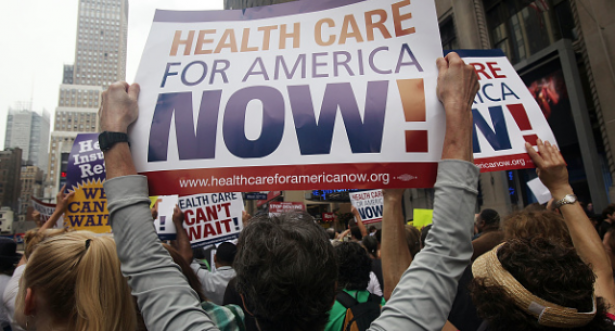 Editor’s Note: In response to subscribers’ requests, this is the fourth in a multi-part series on state-level health care reform. Read the other stories here, here, and here.

A bill to create a single-payer health care system in New York state has been co-sponsored by a majority of lawmakers in both houses of the state legislature for the first time ever — but it will likely be killed by that same legislature this week.

Advocates say that, under pressure from both insurance corporations and labor unions, New York legislative leaders are not planning to hold an up-or-down vote on the measure before the legislative session ends on Thursday.

In addition to lobbying by health insurance companies and business groups in the state, public sector unions including the United Federation of Teachers (UFT) have been lobbying against the bill. Realities of Single Payer — a coalition of businesses, insurance lobbying groups, and unions opposing the legislation — has been running television and radio ads.

In effect, labor leaders are reprising their role opposing Medicare for All during the 2020 Democratic presidential primary.

“We see our primary opposition as private insurance companies and their front groups and associations. They are doing things like running TV ads and online ads against the New York Health Act, with a lot of misinformation and fearmongering, particularly directed towards seniors,” Ursula Rozum, co-director of the Campaign for New York Health, a group organizing to pass the bill, told The Daily Poster.

“But with New York being a progressive state where unions have a lot of power in terms of helping democrats maintain their majority, I think it does make sense that without the support of public employee unions, there are Democrats that are reluctant to get enthusiastically behind the Health Act,” she added. “I think it is accurate to say that the lack of support from public employee unions is part of what is holding up the vote on the bill.”

The legislation would provide universal health care coverage for New Yorkers, with no copays, deductibles, or premiums. It would be funded by a progressive income tax.

If New York lawmakers do not allow a vote on single-payer, it would mark the second time in recent years a large state with big Democratic legislative majorities prevented an up-or-down vote on such a proposal. In 2017, the California assembly speaker refused to hold a vote on a single-payer bill, even though Democrats had supermajorities in both the assembly and the senate, as well as the governorship.

On May 5, the New York City Municipal Labor Committee (MLC) sent a letter to Speaker Carl Heastie to “register our strenuous objection to the New York Health Act 2021.” The MLC represents 102 municipal unions, including the UFT.

“To avoid any misunderstanding, the MLC supports universal health care coverage,” the letter said. “But, as we have repeatedly stated in connection with prior attempts to pursue a single-payer system in New York, next to wages, the health care program for NYC workers is of primary importance.”

The MLC’s argument against the bill is that unions have sacrificed wage increases in the past in order to bargain for better health care coverage and lower costs, and forcing them to switch to a single-payer system would make that past work a waste. “Indeed, because of this economic trade off, we previously suggested that MLC-member workforces be carved out of the statewide bill,” noted the MLC letter.

The UFT is registered to lobby the Assembly speaker’s office and the Senate majority leader’s office on the New York Health Act, and is also actively lobbying against it. The UFT signed an open letter coordinated by Realities of Single Payer sent to the state legislature on June 4 urging lawmakers to oppose the bill.

When asked why the bill has not been brought for a floor vote given that a majority of lawmakers in both branches are signed on as cosponsors, neither the Speaker’s office nor the senate majority leader’s office responded.

Other major unions in the state, including 1199 Service Employees International Union (SEIU), a health care workers union, and the New York State Nurses Association, are supporting the bill.

Public sector unions including the UFT have supported single-payer bills in New York in past years when the bills passed the assembly. But in 2019, the New York State United Teachers, representing unionized teachers and health care workers in the state, came out against the bill. The group said that it supported a single-payer health care system, but believed it should be addressed at the federal rather than state level. In 2019, after Democrats had won back a majority in the state senate for the first time in a decade, the bill didn’t get a vote in either body.

Rozum, the co-director of the Campaign for New York Health, emphasized that unions should be an important ally in the fight for single-payer. “We don’t see the public employees unions as our primary opposition, but rather as a really powerful group that we want to win over in this work.”

A Barrier To Health Care Reform

Historically, the opposition from labor unions to single-payer legislation has been a barrier to reform. While coordinated and well-funded campaigns from the insurance industry and hospitals have been the biggest problem for advocates, unions have not been reliable allies.

During the 2020 presidential campaign, the largest labor union in Nevada, the Culinary Workers Local 226, criticized Vermont Sen. Bernie Sanders’ support for Medicare for All weeks before the state’s caucuses. Sanders ultimately won the Nevada caucuses, anyway, thanks in part to the votes of rank-and-file members of the culinary union, who said they were backing Sanders because of his support for single-payer.

More recently, opposition from the SEIU of Colorado to public option legislation there contributed to efforts to water down the bill. This week, the Colorado state legislature passed a bill that would create a public option in two years if private insurers don’t reduce premiums by 15 percent in that time period. Health care providers will not be required to accept the insurance.